Also covers different departments: Old Master, Victorian, The Pre-Raphaelites, The Bloomsbury Set, School of Paris, Modern British, Post-war & Contemporary, YBA’s and by no means least The Oxfordians. Regular events include a monthly Private View where you can take a closer look at current exhibitions, and private talks to support collectors. 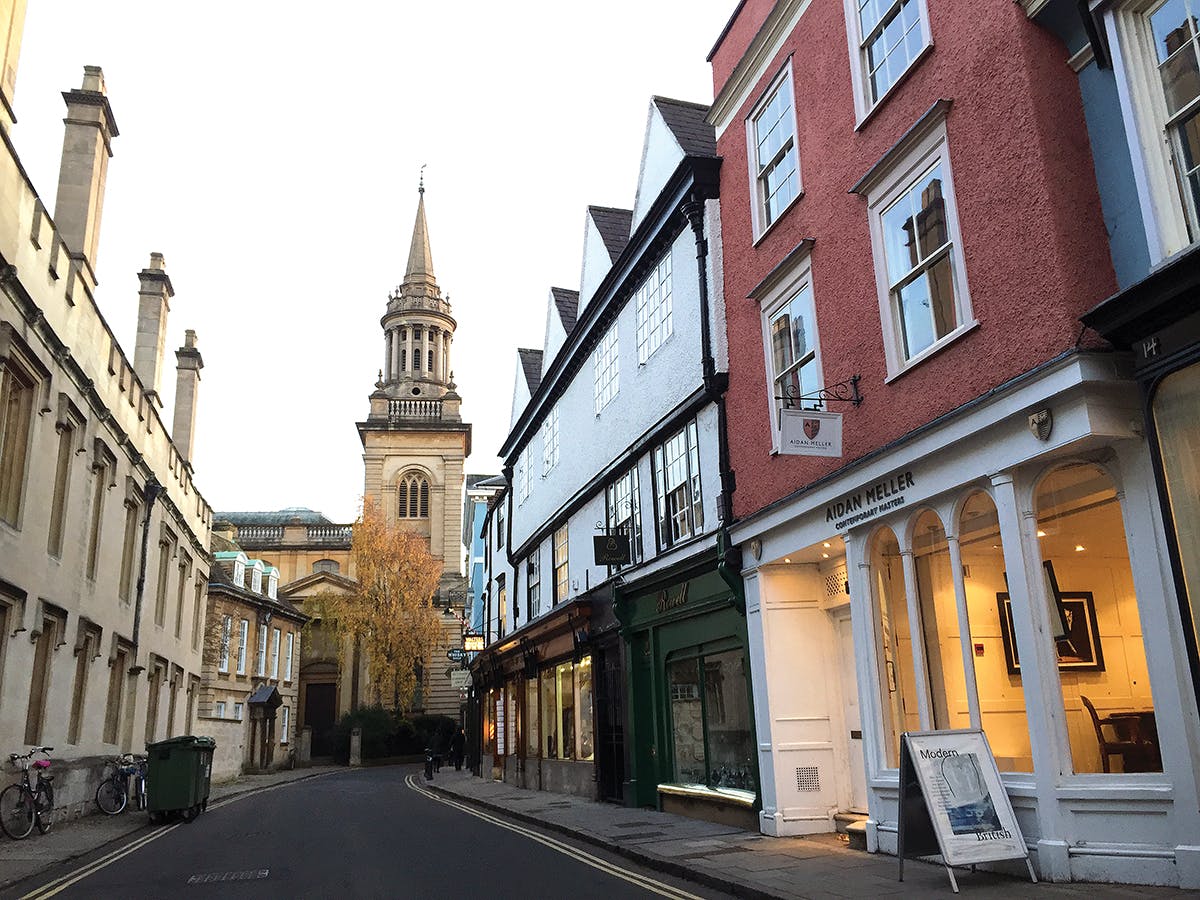 Russell George July 15, 2010
Did you know that you can see an original Andy Warhol in a small shop in the centre of Oxford? As crowds of tourists visit Christ Church and the rest, gazing at weighty portraits in heavy frames, a bright new gallery run by a student of Sotheby’s has opened, featuring some quite startling modern art.

Meller-Merceux is run by Aidan Meller and specialises in contemporary art, as well as featuring some more established artists. My visit coincided with an exhibition by Louis Parsons. On stark white walls were some brilliantly colourful prints, underwater seascapes which seemed to blur fantasy with reality, and which I would dearly like to have in my bathroom. At £500 – £1,500, they’re not cheap, particularly if you are more used to buying prints in Blackwell’s Art, but certainly worth saving up for.

Alongside this exhibition, there is also a show for landscape painter Michael Ashcroft, who seems to have been heavily influenced by Lancashire skies, and that’s no bad thing either. Even if you can’t afford to buy, spending a few minutes getting lost in this sort of swirling, slightly dream-like art is certainly a good way to unwind after a day, in my case, spent pen-pushing in an out-of-town business park. Hey, why not visit the Black Sheep gallery just opposite on the High Street, which also exhibits some great modern work, and features a Rolf Harris original. You’re basically doing a gallery crawl.

But what of Warhol? Well, the originals aren’t actually on show yet (you’ve seen them all anyway), but high-res photos are, and if you have £70,000 lying about, the gallery will bring in the orginal for you so you can take away a real Marilyn - signed by the artist. If that’s a bit steep, the Green Pea Campbell’s Soup print is much cheaper. This may be because green pea is a particularly unpopular soup flavour, or that Marilyn is much prettier than a can of soup. I forgot to ask.
The artistic freedom private galleries enjoy resonates in the scope they can achieve. This spanking new gallery in the High St today is showing two Howard Hodgkin etchings and a Picasso alongside upwardly mobile new Artists. The wonderful assistant passionately reeled off the names of additional local artists the gallery was promoting as well as exciting me about what the future holds for our High St artistically. The variety of what will happen in the future within these four walls seems happily unlimited.

Louis Parsons’ exhibition ‘Freedom’ applies the suggestion to our body, mind and spirit in his soulful collection of blue oils on canvas. The titles of the work alone such as ‘Serenity Together’ and ‘A Fresh Perspective’ are inspiring and the images directly reflect this call for the observer to surrender to meditation. Small details are painted in white flecks of paint on thick deep blue backgrounds to become the narrator for an emotional journey. ‘Infinite Being’ is a swirling abstract work that reminds me of a lost soul being rescued by floating on an ocean of calm. The pieces offer me the colour blue as a refuge, being synonymous with the vibrant blue of a flowing body of water. There is a fascinating mix of work to enjoy in this light and airy commercial gallery that welcomes and informs the casual passer by.

There is a compact, earthy sculpture by Jozsef Szoke that feels both abstract and figurative. The bronze and marble structure seems to fold in on itself so it convolutes to find a box-like shape. The window facing the street shows another piece by Parsons inviting pedestrians to float into the blue of calm perhaps to antidote the finer more critical details of life defined in the precise work of Ben Clarke hung next to it. Clarke’s pink compact oil on canvas is titled ‘Life on Pink’. Life rewards us when we look at the fine details it seems for at the back of the gallery is Clarke’s ‘Life on Yellow’ which is my favourite canvas in the gallery. The trendy T shirts of minute people milling around are captured in the painting with stunning accuracy to the fashions of the moment that will inevitably become dated. As Oxford’s Summer ebbs out, smiling people wearing funky clothes walking around in golden sunshine may be a welcome gasp at nostalgia.
29 Aug 2010
Review this venue