Classes are taught by Sophie Grigson or one of her impressive team of specialists. Cook together in a small class, then sit down to a feast, with a glass of wine. Gain specialist tuition, recipes, and anecdotes.

Classes are taught in central Oxford, and include fundamentals such as Knife Skills or Butchery, plus foods from all sorts of cuisines - Moroccan Magic; Korean Kitchen; Cuisine de Provence; Lemongrass, Lime and Chilli; or Real Mexican. Specialist vegetarian classes include Latin American Vegetarian, and there is also a gluten-free baker among the specialist tutors. 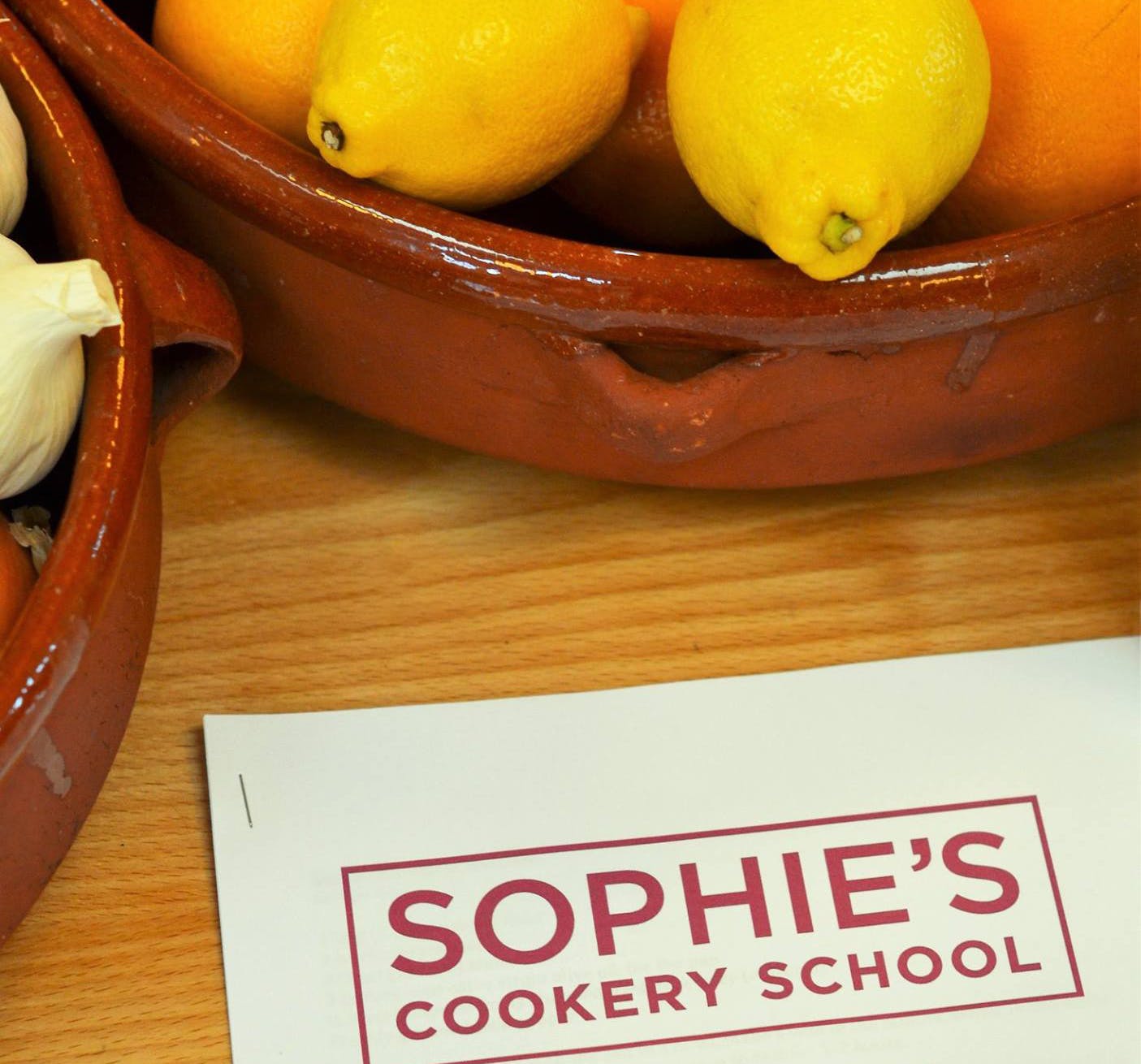 Jen Pawsey March 6, 2018
The way to a person's brain is through her stomach

Having been to two cookery classes I would like to give you a little of the flavour of Sophie's Cookery School. The classes, although run by specialist tutors, seem to have much in common with Sophie Grigson herself - friendly, informal, inquisitive, easy-going but efficient. We had fun, but we also got results, which was vital as we were going to eat those results at the end of the class! Two generations of Grigsons were in evidence here, the class being taught by Sophie's daughter Florrie, and Samuel Suarez, known as Roman. Together, Florrie and Roman make up Kalaca, here to prove that Mexican food is about much more than Tex Mex.

We start with that staple of Mexican life, tortillas, and a play with a tortilla press. Then we split into two groups and made red and green salsas, and then used these to build main dishes. The red salsa became the base for a sort of soup with pork scratchings in, while the green salsa was built into Chilaquiles, a sort of nacho dish, with fried tortilla chips, shredded chicken, and sour cream, as well as our piquant sauce. We also made Elotes - corn on the cob with simple but rich accompaniments of garlic mayo, lime, cheese and chipotle.

Florrie and Roman were very open about how hard it is to find Mexican ingredients and equipment in the UK - tomatillos are occasionally available in the summer, and a chapatti pan (easily available on the Cowley Road) makes a good stand-in comal for cooking tortillas.

Roman's first language is of course Spanish, and he is the authentic native Mexican chef. But Florrie has been living there long enough to pick up the finer points, and she translated for Roman where necessary. Sophie made mayonnaise, cooked a chicken, made almond "feta" and argued with Florrie about the best way to cook sweetcorn.

Then we sat down and had a fabulous feast, with glasses of wine. The conversations were organic and free-flowing. We talked about visas, and international travel, Florrie and Roman's plans to set up a travelling cinema in Latin America, and their market stall - if you want to taste real Mexican food without having to make it yourself, you can find them in the various Oxford Farmers' Markets most weekends.

This time I know my way round a bit more - the layout of Restore's Café, the trendy plastic aprons, and where to find the spoons. I'm also greeted as an old friend. Today we're making chutneys, Pav Bhaji, Bhel, and badly behaved potato croquettes that threaten to fall apart, but still taste good. This is very reassuring, as it's the sort of thing that happens in my own kitchen.

Pav Bhaji (pronounced Pao) is a delicious spicy mix of mashed up vegetables, eaten on buns. Bhel is like a fresh version of Bombay Mix, with the crispy noodly element, but also chutneys, potato, tomato, and lots of coriander. The chutneys are a fresh green coriander and coconut, and a stewed fudgy date and tamarind. The filling for the croquettes is pea, raisin and ginger. Our teacher, Samar Khatiwala, is Gujarati, and this is all the sort of street food you might find in Mumbai, where apparently people wander out for food at all hours of the day and night. A bit like Oxford's kebab vans, we agree.

With just one teacher, he was harder-pressed to oversee everything, and so we grew resourceful at finding things to chop and working out what to do next. His exacting standards of fine dicing became a bit of a theme, as he kept sending back our finest chopped onions!

This time the feast was accompanied by discussion about the craft of naming classes, how many people who go to a vegetarian class are actually vegetarian themselves, and different street food cultures in Mumbai and Oxford. I leave with my mouth tingling.

Sophie's style is informal, first and foremost. And friendly, and fun. It doesn't feel like we're on Masterchef, or under Gordon Ramsey's irate gaze. The Grigson family are a cooking dynasty but none of them arrived there via the Chef School route - they all studied different things at university, and got into cookery and food via interest, intelligence and enquiry. They teach tips and tricks, not 'The Right Way'.

Many classes take place in Restore, a nice space with room for different stations around the room, and a grand central table for prep and then for eating around. But the equipment does have to be imported, and there didn't seem to be any scales, not that it mattered for either of these classes as the recipes were fluid, being scaled up, and we were apt to chuck in more of whatever we'd just finely diced without ill effect.

Most of what we were learning was about flavour combinations, not process-driven, though judging the right amount of water in tortilla dough certainly takes practice. You could probably learn these recipes from a good cookbook. But it is of course very different being able to see it, smell it, ask questions, and being under some eagle eyes of some very good chefs. Then there's the sheer luxury of several uninterrupted hours to focus on cookery, and a superb support team of sous chefs whisking away dirty bowls, clearing up after you, and providing tools and ingredients to hand just as you need them!

I learnt a lot. I finally got to smell epazote (a Mexican herb I'd read about in books), that in India only red onions are used not white ones, and limes but not lemons. I learnt that Pav comes from the Portuguese for bread, and that there were Portuguese colonies in India even after the Brits left. And that Mexican buses don't tell you where they're going. And to cook some lovely things: the proof of the cookery class is surely in whether you take that knowledge home and use it. I've made Pav Bhaji, and a fair number of tortillas so far. And yes, I am sharpening my knife every time I start to cook! I think that counts as success. I attended two classes that were very easy on the allergy/free-from front. Mexico is quite in love with cheese, but both were very dairy- and gluten-free friendly. I kept my eyes open for stock cubes and other potential problems ingredients, and I asked for my tortillas to be cooked separately. There were definitely moments I felt I needed to be on the ball. But I think anyone with dietary requirements would expect this - we're never off duty. And I definitely did feel the team were helpful and on the ball too, extremely willing to make the classes work for me too. It is essential to talk to the team when you book, but don't be afraid to ask if a class can be adapted. You might get some alt-feta made personally for you by Sophie Grigson!