Set up in Autumn 2009, The Missing Bean in an independently owned and run espresso bar, set up to bring the artisan Antipodean style coffee ...

Set up in Autumn 2009, The Missing Bean in an independently owned and run espresso bar, set up to bring the artisan Antipodean style coffee and laid back atmosphere to the heart of Oxford.
In 2014 we set up the Roastery just down in East Oxford, where we roast coffee for the cafe and our many customers around Oxford. 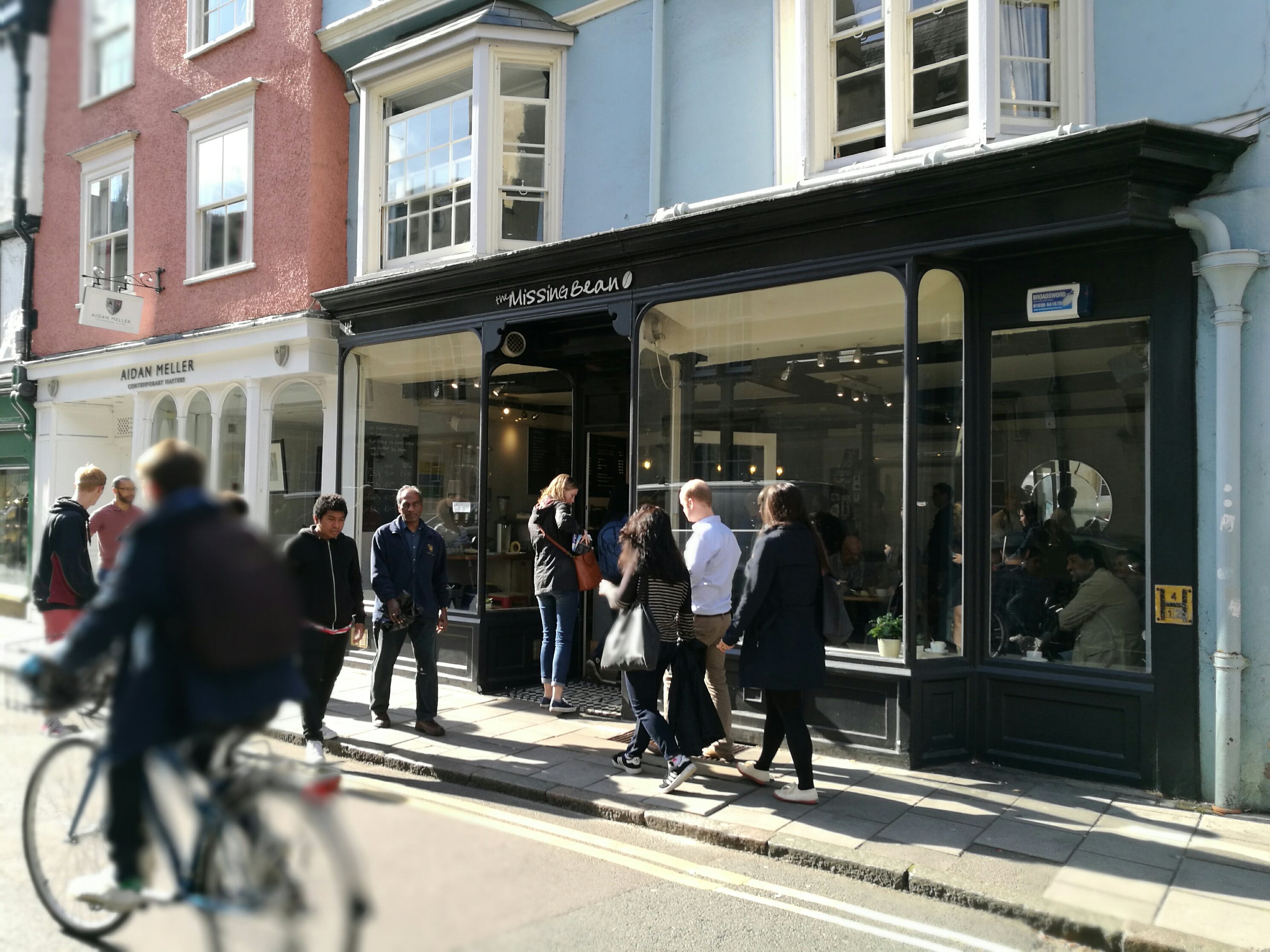 The atmosphere of Missing Bean could be described as frantic, but really it reflects its popularity. The shop is buzzing, full of students returning to the hive to load up on energy before heading off in a hazy line to the library. It's a popular hangout for working, even though it doesn't have wifi, or stacking up books and getting distracted by a steady stream of friends, and is too cramped for a relaxing afternoon, but that's the charm. As the weather gets colder the windows steam up and it gets harder and harder to find a seat among the bristling hipsters and 'studious' workers, but it's always welcoming and the staff are warm and friendly. The coffee, I reckon, is the best in Oxford. They prepare it themselves at their roastery on Magdalen Road - which often has tours and tastings, as well as its own café - and source it from very specific areas. The house roast is a sustainable blend of 3 South American beans, but they also offer single source choices that vary seasonally, both to buy as a drink and ground to make at home. The baristas really do know what they're doing; the standard range of coffees (as well as some teas and juices) are on offer but they taste amazing. With a flat white (maintaining the vibe), the richness and fragrance of the coffee came right through. The Bean's version really maximises on the quality of their coffee, and is really cheap too. For the sake of review-based variety, we also got an iced Chai latte. The warming spices against the ice were a bit confusing, but it was basically a nice, sweet drink, great for Christmas on the beach. As a tip though, I think their drinks might be a lot better when taken away, but that might just be hipster superstition. The sandwiches are great, but on this particular mid-afternoon visit we made an unexpected venture into cake territory. The range is small, but with a homemade feel that complements the atmosphere. The apple and blackcurrant flapjack was good and balanced, excellent stodge for an afternoon snack. The brownie, on the other hand, was more dense than the Bean's clientele, but I felt the mix was a bit off; more like a grainy fudge paste than fluffier brownies. The lime and courgette cake saved the day with invention and zing: it was surprisingly light and refreshing and worked well with the coffee. They range between £2-3.50, so aren't excessively priced for a coffee shop.

What is the Bean missing? Well, a toilet, but otherwise there isn't much else you could ask for. It's a lovely little café. a really handy place to meet up, and most of all, they serve really great coffee.

Wish I'd found this place earlier! Great coffee - not burnt and not too milky, just they way we kiwis like it.

brig118 17 Apr 2012
Easily the best coffee in Oxford. Good quality cafe food of sorts that are rare in England. A shame that the quality of the service has declined noticeably, in speed and other basics, now that the owners seem to be at the cafe less often.
Gadda 21 Aug 2011
Thank you! I feel like I'm home the moment I step in the door. Please open another one!
sydneygirluk 23 Jul 2011
The coffee is excellent, and the place has a cosy atmosphere: it is predominantly a cafe where people come to chat rather than a coffee shop-cum-library. My major gripe is the waitstaff. They are very friendly, and certainly look like they walked out of some hipster neighborhood in Brooklyn. But they are incredibly slow, and seem to have an appalling work ethic. I have sometimes waited at the cash register for more than five minutes, watching three or four baristas joking with one another, or just drifting about without any of them acknowledging me or taking my order. Then it takes another small lifetime to get change after paying, because someone else just made a joke, and oh, isn't it funny. They behave as though the Missing Bean is their living room and some of us have happened to stroll by. Or, they'll just close 15 mins early because it's been 'slow'. I appreciate that the place is going for a laid-back atmosphere, but there's a difference between laid-back and lazy.
av 17 Jul 2011
Best coffee I've had in Oxford - actually, make that this side of the Channel. It's a completely different experience from the stuff served in chain coffee bars or even many other independent places - a rich, complex flavour rather than just burnt - and the drinks are nicely small and strong rather than being topped up with too much milk like those at certain American establishments.

As an (admittedly coffee-obsessed) student, I don't find the prices oppressive - they're slightly lower than most chains, and you know the profits are going straight to the friendly guys who served you rather than some faceless corporation.

I now make a detour to go here on my way to morning lectures. Sandwiches aren't half bad either, even if the choice is a bit limited - but then that's not really what you go for.

OH 22 Apr 2011
Easily the best coffee in Oxford! Run by ex-antipodeans who know their coffee, and who make super espresso-based coffees. Best coffee this side of the Tropic of Capricorn.
Oz 2 Sep 2010
There are not many places that fill me with joy when it comes to great coffee outside of London, but the boys and girls at Missing Bean have certainly mastered the art of everything great when it comes to coffee and nothing but the coffee. Keep up the great work, and all credit to you and your roaster.
James Hoffman 13 Aug 2010
Without any doubt Missing Bean is the number 1 venue for great coffee in Oxford, and just where do your buy your coffee beans????
Bigphil 11 Aug 2010
This place opening up last year was like heaven to a coffee-starved antipodean experiencing the woeful attempts at coffee found at all chain cafes in England.

The Missing Bean has in my opinion the best coffee in Oxford, including flat whites (for all you homesick antipodeans). Well made, beautifully presented, with excellent customer service.

There is a little bit of food, reasonably priced (the BLT ciabatta is great) but as the owners say, it's all about the coffee.

(Tea, hot/iced chocolate and juices are available for non-coffee drinkers. And try the affogato in summer!)
yim197 29 Jul 2010
Interesting little place, this. The clientele is mainly students, which is fine, I guess. The decor is clean and functional- laminate floor is a naff betrayal of the building's character, but I guess a practical solution nonetheless.

The place is small and invariably full. Don't be put off... Sitting is not strictly necessary to enjoying a decent coffee, and it is exactly this that the Missing Bean does exceptionally well. The espresso is absolutely top-notch: nice beans, made in a good, clean machine. The cappuccino is carefully prepared and (depending on who makes it) as good as it gets, this side of Venice.

All the food is only average, but this is the sort of place you come to for a fix of really excellent, reasonably-priced coffee. It is, in fact, in my opinion the finest coffee in central Oxford.
Food Boy 14 Jul 2010
Best coffee in Oxford, no doubt! Friendly staff and amazing, creamy Flat Whites. Not much food though, but this is a proper coffee shop (not like the big chains - I won't mention names) and that's why you would go there, for the coffee.
KA 12 May 2010
Review this venue