Peloton Espresso is a bike cafe (clubhouse and coffee shop) in Cowley. Serves hot drinks and small bites of food. 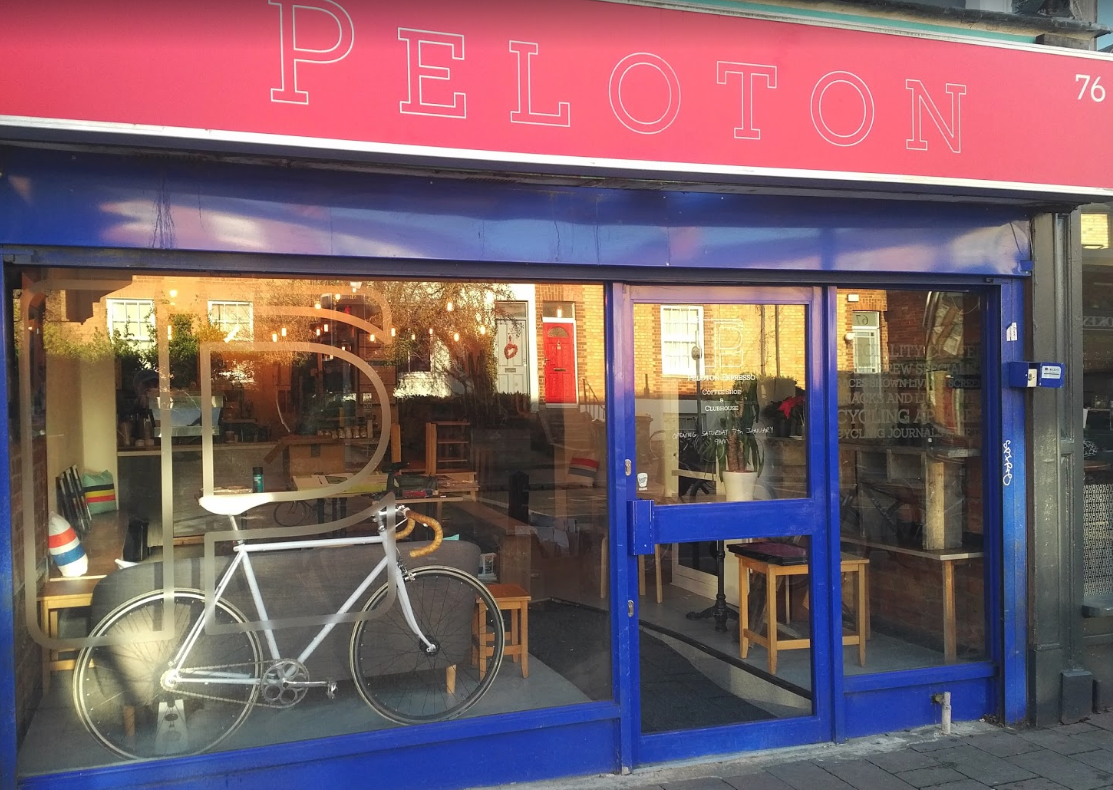 In cycle racing terms, the 'peloton' is the main body of cyclists, cycling together as one and thus reducing the impact of wind resistance on each individual. It is an example of working as a group to achieve individual goals, and it is easy to see how using such a name could embody the ethos and nature of a trendy new bike café on Cowley Road. 'Peloton' is a dream team made up of Oxford cafés we have known and loved, namely Zappi's (in the involvement of Dan Roiser, former manager of Zappi's) and Quarter Horse (whose building, layout and coffee have been retained), and the outcome of this collaboration is, unsurprisingly, a success.

Firstly, the most important thing in a coffee shop must surely be the coffee, and for this element Peloton has, as I mentioned, retained the coffee from the building's former occupant (Quarter Horse). A case of 'if it ain't broke...', since the Quarter Horse 'Dark Horse' coffee bean has been a favourite among Oxford's coffeephiles for some years. Michael sampled this coffee prepared in Aeropress form, and found it smooth and light; very nice indeed. I had an Americano which was quite bitter, as is often the way with Americanos, but not unpalatable. So if strong coffee is your poison, you'll be in safe hands and if slightly bitter coffee tastes like poison to you, go for an Aeropress.

The Zappi's part of the new combination has contributed two main things: a cycling theme and most importantly, banana bread. This is very welcome, even if they have done away with the knife-ful of butter serving style in favour of a mini planet-destroying plastic packet. It was nevertheless melt-in-the-mouth goodness, and the brownie was good too. I won't mention the veggie sausage roll. Peloton's cycling element is also not just a theme but a target market, and in the short while Michael and I were sitting there, huge amounts of filthy (and thus presumably genuine) cyclists wheeled their road bikes up the painted road on the floor which ran from the door to the garden. They had mud all over their faces from their Saturday morning rides, by which I do not mean to imply disgrace in any form. The road, incidently, also adds a Postman Pat, playtime charm to the otherwise rather grown-up cycling decor: campagnolo signs above the till and footage of lycra-clad men whizzing around the alps on the mounted TV.

But Peloton is not cyclist exclusive; in fact the demographic was already broader than that of Quarter Horse. The friendly community vibe which so many of us enjoyed in Zappi's looks to have been pumped into Peloton too. As the name would suggest. I felt immediately at home there and it was a great place to spend a Saturday morning. Michael and I recommend.