Cafe with a window display of tempting cakes.

Cafe situated at the bottom of the High Street. The window displays always look packed with sandwiches, paninis and cakes! 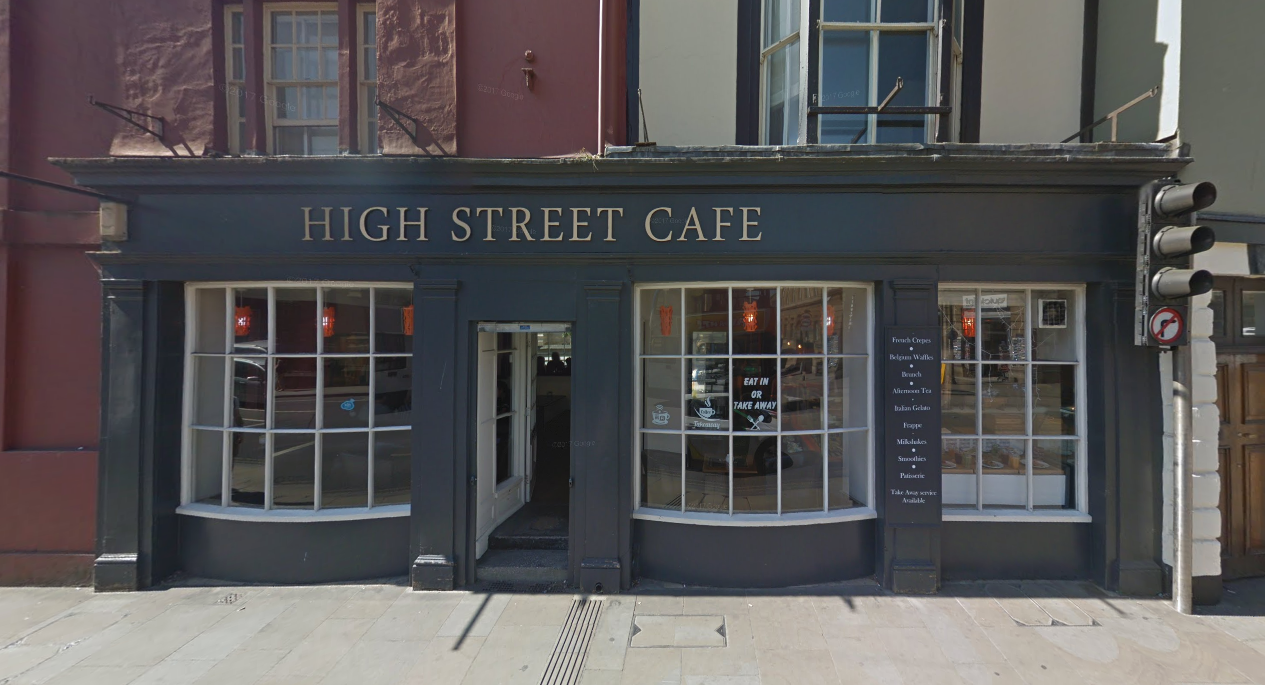 The below reviews are from the venue's previous incarnation, Oxford Rendezvous.

We had some coffee and cakes. There was a good range to choose from, but the cakes didn't taste fresh. Italian ice cream is advertised outside and there were maybe 3 or 4 different flavours, 100% not Italian flavours. The service was awful; one of the waitress was constantly hiding in a corner near the bathroom chatting on her mobile phone, the other one was a bit better but she spilt all the coffee while taking it to us. They were both very rude and after we where there for about half an hour, one of them came to tell us to go to pay (the café wasn't going to close, were we at the table for too long?!).

At the till, there was some confusion over what was supposed to be on the bill, and we were generally made to feel unwelcome.

I went this weekend, it has improved massively. The food was much better, I ordered a wrap - it was very tasty - and the cakes are much better! Very delicious and light, and the service was very efficient and quick. I was very impressed by the refurbishment.

I'm rarely one to write reviews on places, but I was so disappointed by the service here that I felt obliged to warn others not to waste their money. Went on a Saturday afternoon with my family and it was very quiet compared to similar venues - I fully understand why now. The service was awful and frankly rude, the coffees and hot chocolates were poor, i.e. weak, milky and luke-warm, and the cakes substandard. Hygiene was also a major issue in the food prep areas and it seemed that the toilets hadn't been cleaned for a considerable amount of time.

Food quality is amazing. A nice relaxing feel to the place. They could do with a few more waiters/waitresses when the place gets busy.

Dan 20 May 2012
Went in yesterday and it was quiet. I only had a cup of tea but my father had a crepe and said it was lovely. The service was good and the staff were excellent.
Hannah 27 Oct 2011
Poor, disorganised service. Upon entering there were a number of people milling around the entrance, unsure of whether to order at the counter or wait to be seated. We seated ourselves. The menu is extensive and varied. However, whilst the menu offers a choice of bread for the sandwiches, we were told the only option was white baguette. The moroccan mint tea was also unavailable, which was rather disappointing for a moroccan cafe. Of the three sandwiches we ordered, only one was brought correctly. My replacement sat on the counter for some time before being brought to the table. All three sandwiches had been toasted, even though none of us had requested this. The food itself was fine, but with so many competing coffee shops in Oxford they can't afford to be this sloppy with service. It might be an ok venue for simple coffee and cake, but next time I'll go elsewhere for lunch.
Penny 5 Aug 2011
It has been my second time now. The first time was great- good service and the food was delicious. That time was quite quiet and not many people about- so it wasn't busy or too much for the waiters/cooks to get ready. The second time however was quite the contrary!

I went in and there were a queue of customers waiting to sit down to eat their food. It was so busy that there was hardly enough space to sit down and eat peacefully- despite the cooks saying 'please sit'. So I decided to have a take away instead. I told the cook what I wanted and he didn't write it down, continuing with the other orders.

There were three cooks and they were in immense pressure. Customers kept saying 'where's my order' and were waiting for them to get it ready. They solved the problems and carried on. But 25 mins later - no one had even started on my order! As you may be aware those who come to eat at Oxford are on the go - and need to buy and eat fast! So I had 5 minutes until I needed to hurry and go. I was losing patience. I then reminded another cook and he started on my food, which took about 4 minutes.

Not happy with the service at all. Superb location, quite tasty food, can be quite good service (when not in a busy time), but I think they need to work a little harder on the way they manage busy, impatient, hungry Oxford customers!

Greg 5 Jul 2011
It's lovely! The food is delicious and the place is always packed out on weekends. I am French and I love crepes and this place does the most amazing crepes. We go there almost every weekend and sometimes it is so busy but it is worth the wait. Would recommend it to anyone. My personal favourate is the supreme crepe, it keeps me going back. We are looking forward to their Marakesh Fever Nights.
Stephenie 24 Mar 2011
Really nice, good availability of vegetarian crepes, really tasty, looking forward to going again.
Mark 16 Mar 2011
Bad service and poor food. Having been in once before for a perfectly pleasant coffee, I returned this Saturday lunchtime. The place seemed chaotic on entering, but we found a table and were eventually brought menus. After ordering, one drink arrived immediately, the other (a cup of tea), took nearly half an hour (then an extra 10mins for the milk). While we were waiting, we noticed several other tables looking impatient and enquiring about their food/drinks. Meanwhile the waitresses repeatedly checked orders, but then carried around plates of food which it appeared nobody was waiting for!

Eventually our food arrived, although it wasn't quite what we ordered! A salad consisted purely of iceberg lettuce, while potato wedges were replaced with tortilla crips, and I was given pitta bread rather than a wrap. All this would have been tolerable, if two sandwiches and two drinks hadn't come to close to £20.
Cathy 14 Mar 2011
Well, I went here Sunday lunch time with my girlfriend and it was a bit rubbish really. Especially disappointing after the two good reviews it's already had. I wanted a full breakfast but there were no sausages or bacon. I also wanted a white hot chocolate, but they didn't have any of this either. When the food arrived it wasn't really that good. I ended up having eggs benedict with smoked salmon (instead of bacon). The Brioche it was on was pretty poor. My hot chocolate was a very long way from the best I've ever had. We won't be returning.
Mr Particular 7 Mar 2011
Oxford Rendezvous is totally fab.. cool and contemporary, warm and comfortable, versatile menu with huge selection of fresh organic food! A welcome change from the usual Costa(s) and Starbuck(s)! Absolutely love it!!
Zara 28 Jan 2011
I went there last week for the first time and I must say, I was pleasantly surprised. The food was excellent, as well as the service. I had a Moroccan hot pot folllowed by a savoury crepe. The prices are very reasonable. I would definitely go there again.
James 24 Jan 2011
Review this venue