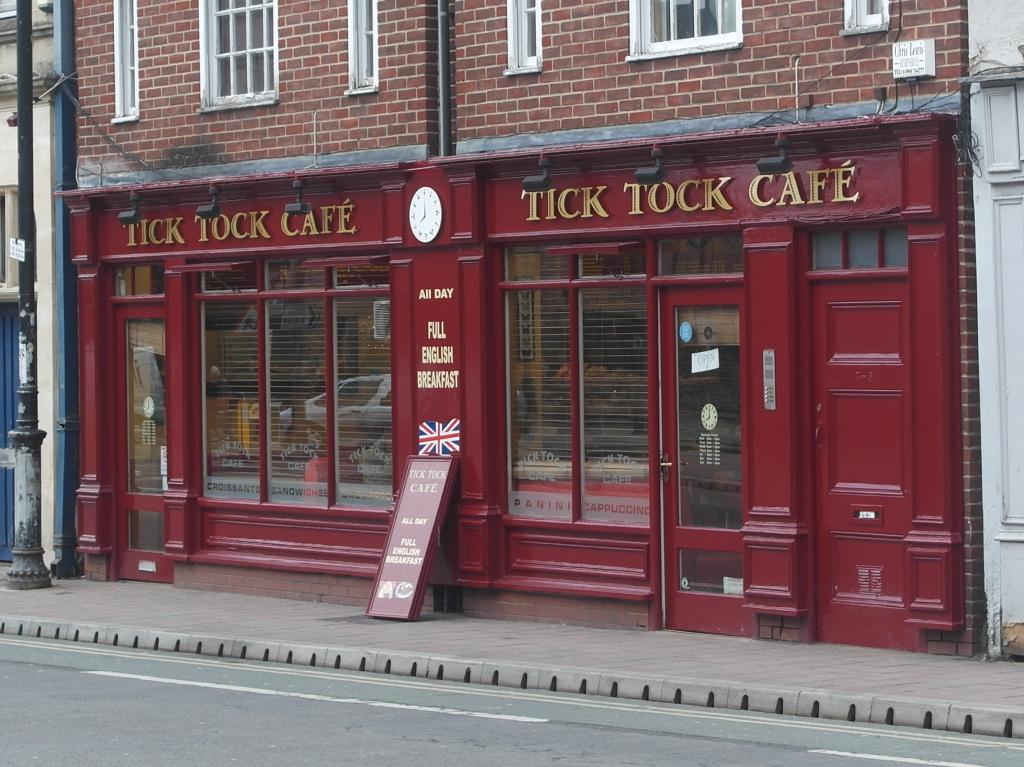 Tick Tock Café, with its walls of clocks and its menu of good solid café grub, is a quirky favourite. When I lived on , I used to go there for the occasional jacket potato and a mug of coffee, but I'd never tried one of their breakfasts before, so when they invited us to review, I jumped at the chance.

My colleague Russ and I arrived at the café and were immediately greeted by the friendly staff, who pointed us towards the breakfast menu. Russ ordered the Fryday Friday, which included eggs, hash browns, fried bread, sausages and mushrooms. I kept it traditional and ordered the Tick Tock breakfast, which is constructed on the principle that if one is good, two is better - two sausages, two rashers of bacon, two hash browns, two pieces of toast, and two eggs, with some beans, mushrooms and tomatoes to back it up.

Our breakfasts were served quickly, and mine was exactly as I had expected - a spread of different foods, with so much on the plate that I had to work out a strategy to approach it. I'd chosen to have my eggs scrambled, which proved a light and tasty complement to the meaty slices of bacon. Everything was cooked well, especially the hash browns, which are always a favourite of mine. There was nothing groundbreaking about the Tick Tock breakfast (except the interesting twist of herbs with the grilled tomato), but it was a good, reliable fry-up that I really enjoyed. Russ's Fryday Friday came as a wonderfully presented tribute to fried food. There is a worry that this type of food might be too greasy, but this wasn't the case here. The eggs were great, satisfyingly cooked without losing their runny yolk, while the mushrooms were scrumptious additions. The fried bread was surprisingly light and the hash browns were a fine addition to the meal. The sausages were merely okay, but a passable sausage is still worth eating. If you're in and looking for a hearty cooked breakfast, you won't go wrong with Tick Tock Café. There are also lighter options for those less hungry than me, and a good range of vegetarian dishes. The café has a bright, friendly atmosphere, and despite the number of clocks on the walls, it's all too easy to lose track of the time while tackling their signature breakfast. Russ concluded that "the atmosphere of Tick Tock Café was warm and welcoming with the decor full of charm and character. The staff are exceptionally friendly and I'd certainly return again for another scrumptious breakfast."

Tick Tock Cafe is tiny, yet it almost always has room to sit down, which shouldn't be physically possible! It's a really good place for a late weekend breakfast, under the huge wall of iconic clocks, or for a mid afternoon feast to cheer up a day. It's not only open all day, but welcoming all day too.

The most popular dishes are probably the all-day breakfasts, which have gluten-free and veggie options, and the staff are very accommodating about switching elements. There are also a wide range of sandwiches, which I've never tried, and some excellent (huge) jacket potatoes with plentiful filling and which actually come with interesting salad. Not just limp iceberg for garnish, but tasty greenery with bits of sundried tomatoes and dressing.

The coffee is good, the service extraordinarily prompt, and it's always a welcoming place to recover your spirits or celebrate the world.

Excellent Breakfast spot. Which is why it's nearly always packed! But if you can get space on half a table they're a brilliant place to while away a bit of Sunday morning, reading the paper and curing your hangover with a big old-fashioned fry up.

The clock theme is bonkers, the service is friendly and they'll recognise you next time you come in, and there are secret gluten-free sausages if you ask nicely. If I didn't live over the other side of town they'd probably never get rid of me.

See also recent breakfast review here
Ian 13 Oct 2009
I usually go to Tick Tock Café with my partner every week for an English breakfast, but I also pop in for a coffee, tea and cake or even lunch because there is so much choice. Also prices are very cheap compared to other places and it's very friendly - the staff serve you with a big smile. I also really like going there because they have got daily newspapers and magazines to read for free so while I'm having my coffee I can read the football news and my wife can read her favourite magazine before we head into town for shopping (and then again on the way back afterwards!).
I think the café takes its name from all the different kinds of clocks on the walls and pictures of the world times which is quite interesting.
Basically it's a very nice café - a million thanks to the staff and owners!
rickymrm 28 Mar 2008
While passing Cowley Road nearly into the town I felt like I need a full english breakfast. Thinking of where to go suddenly my eyes goes to the red doors onto my right.
As I looked, it was Tick Tock. As its name Tick Tock when you go inside there is a lot of clocks on the wall telling you the times of different countries around the world. I set on soft leather sofa and was thinking that after how long I will get chance to be served, that suddenly a young man come to me to take my order. He was well mannered man. He behaved so nicely and took my order. My order was full english breakfast.

The breakfast was on my table in few minutes and I spend that few minutes looking at the Tick Tock clocks on the walls wondering to the times around the world. The breakfast was brellient. Time come to pay and the prices was so reasonable that I didn't had any problem with it. Wishing to leave him a nice tip but my budget wasn't really good for this month.

Well said that if you get good you pay good.

Now I am thinking to change my time tables for tick tock cafe.
Beacuse if I eat better I can read better.

At last I will say the food was brellient the service was brellient and atmosphare was brellient.
Nick 25 Mar 2008
Which came first - the name, or the job lot of clocks hanging on the wall? And who made the decision to assign the Shrek clock face to Mexico, and Brad Pitt to Bulgaria? And where would you find such a vast array of clocks all at once? Was it a bulk order from eBay? Anyway, Tick Tock Cafe is a pleasant enough place to while away a couple of hours on one of their squishy sofas pondering these questions, or deeper more philosophical ones if you happen to be a bright student type. It serves the usual range of pastry and panini fillers to fuel you on your way in or out of town, and you can watch the world go by if you aren't tempted by the free papers. The prices seem pretty much standard for pleasant but undistinguished food, though my last visit was marred by a dispute between my companion and the waitress about the price of the millionaire's shortbread. They didn't charge a million, but from his reaction you’d have suspected so. It turned out he hadn't been short changed, but this is the second man I've met who's been outraged at the cost of this particular delicacy. Anyway, I’d happily fork out again for the crumbly and compellingly sickly concoction of shortbread, caramel and chocolate, washed down with a pleasantly frothy cappuccino.
Lucy Lightfoot 2 Mar 2007
With reference to the recent incident - viewable here. As a Guide Dog user, worker with the blind and a person with a conscience I would avoid this place and take my trade to a human and assistance dog friendly environment.
Dave 21 Nov 2005
Newly refurbished and renamed, Tick Tock (formerly La Croissanterie) is ideally situated for sitting and watching the bustle of the Plain through its broad plate-glass frontage. Considerably expanded in its new incarnation, the place is light and roomy, the walls adorned with clocks displaying the current time in various countries of the world to enhance its cosmopolitan feel. And indeed, there are a multitude of different languages to be heard over your croissant or full English breakfast baguette, and the cheery manageress is pleased to announce that soon the international theme will be further developed by the addition of an evening meal menu. For a set price (under £6), the café-by-day, restaurant-by-night will soon be serving a mixed menu of main dishes such as lasagne, moussaka, mixed meze, etc., and what's more, you'll be able to bring your own booze to drink with it.

Whilst the generous and competitively-priced full English breakfasts (in a baguette or not) are possibly the café's strongest selling point (apart from the clean and relaxed environment, which apparently will soon be further enhanced by the addition of squishy leather sofas), the continental breakfast is good value too (and the enormous croissants are baked on the premises, so freshness is assured). The standard range of shortbread and chocolate-related cakes are available (as you might expect, given that the outlet is one of the family-run chain of Croissanteries across the city), along with sandwiches and paninis to take away or eat in, with a multitude of the usual sandwich shop fillings.

Tick Tock is a refreshingly inexpensive and relatively stylish little snack stop on your way between town and east Oxford, and as such, if you haven't sampled its wares yet, it's definitely worth a look in. You may find you stay longer than you intended.