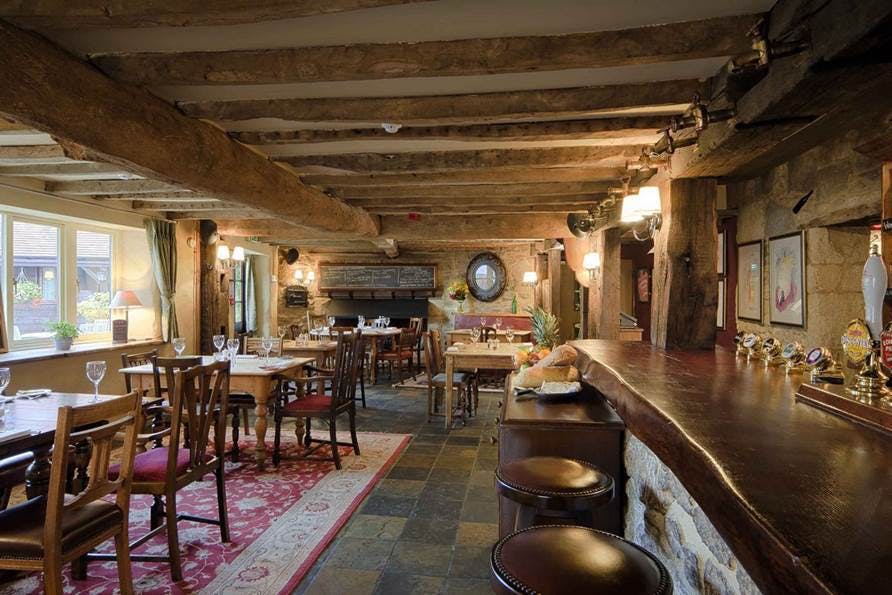 If you have guests from across the pond who want to see (or even stay in) a typical quaint English country pub, the Talkhouse is perfect. With its Cotswold stone exterior, exposed wooden beams and roaring log fires, there's much to like about this cosy, welcoming pub located in Stanton St. John. Does their food live up to this idealistic image?

To start, I opted for the cheese bon bons. The crispy outer coating was pleasant to bite into, and the use of smoked cheese apposed to cheddar was refreshingly different. The salsa accompanying the bon bons provided a much needed freshness - the pomegranate seeds were particularly lovely. As a dish, it did seem like an odd combination of hot and cold elements, which were both nice when consumed separately but a little strange when eaten together.

Companion No. 1 thought that his starter of the wild game and chestnut sausage roll was well seasoned, and bigger than the other starters, which he thought were too small in comparison. Companion No. 2 said his chargrilled squid with broccoli, toasted pine nuts, sweet chilli and crème fraîche was tasty but didn't leave a lasting impression.

Continuing a theme, as my main I chose another fried delight: a smoked haddock and cod fishcake, topped off with a poached egg and parsley sauce. I really enjoyed the presentation of the dish, but was a little concerned that I would be left hungry. Fortunately, the fishcake was crammed tightly with potato and fish, so there was no need to call for chip-shaped reinforcements. The addition of a parsley sauce (in an adorable jug) was a stroke of genius and the egg was poached to perfection.

No. 1 said the hand pressed beef burger was a bit well done for his liking and so it was too dry, but much like the sausage roll it was well seasoned. I tried a little of the meat, which tasted to me like a lamb kofta - amazing! No. 2 said the cod supreme with butterbean and tomato ragout was nicely cooked and the two elements complemented each other well. The portion sizes varied quite a lot, especially in the starters and the mains we tried, so some uniformity between the sizes would be good, even if it's just to make those with smaller portions feel a little less jealous of their fellow diners' generous servings!

Dessert was a playful treat; the chocolate fondant with an orange cream sauce was still gooey in the middle (as it should be) and the dehydrated bits of orange on top added an interesting texture. The chocolate bread and butter pudding came concealed, covered by a milk chocolate shell which melted away when the server poured crème anglaise over it, revealing a scoop of vanilla ice cream and a squidgy bread and butter pudding underneath. It was certainly an impressive looking pudding which disappeared from No.1's bowl at some speed. The coffee ice cream with marinated raisins, a shot of Pedro Ximinez and biscotti was well received by No. 2. I got the sense that this was where the chefs were able to experiment the most with their dishes, trying out different techniques and having fun with it.

Overall we enjoyed the food we were served, which seemed to go from strength to strength with each course, and would happily return for another meal. The service throughout was very accommodating without being overbearing - a tough balance to strike. The bar has a decent selection of Fullers' ales, wines and spirits. We felt very at home in the Talkhouse and decided to extend our evening with a game of Trivial Pursuit by the fire. What a relaxing way to round off a delightful evening out in the countryside.

We ended up here after a slightly random walk in the countryside, slightly too early for normal dinner service on a Sunday evening. It's not exactly remote, being only 15 mins' drive from Headington, but it is rural, and we were the only diners in the place. Service was attentive but non-intrusive and food came reasonably swiftly (lucky, as we were pretty hungry). I asked for a glass of Peter Lehmann Riesling and when it appeared to be off it was changed immediately for a fresh one from a new bottle - no questions asked - which was nice. (The staff made sure I was happy with the second too.) A blonde beer on tap - Fullers' Discovery - was also consumed, and appeared to be well kept as well as delicious.

Portions were enormous and beautifully presented. The pork belly was tasty, thick and moist and accompanied by all the trimmings: a huge pudding, spuds, cauliflower cheese, broccoli and a flavourful gravy with a good consistency - plus apple sauce, of course. On asking about the origin of the meat (something we often do) it was revealed that it had come from a farm less than 100 metres away - so diners can feel pretty smug about their savings on food miles, should they wish to. For the veggie option, stuffed bell peppers with spicy lentils, ratatouille and a pesto mash (yum!) were excellent. So often pub vegetarian options can be bland or just plain wrong; this was delicious and I would happily order it again. The fresh salad with it was again a nice touch too - and once again a rare thing for a pub to be able to produce properly with any regularity. (I hear that the head chef used to work at Gee's in Oxford however, which presumably accounts for all of the above, as well as the below.)

We couldn't resist desserts - all of which weigh in at around the £5.00 mark - and ended up deciding on apricot tart with whipped Baileys cream and berry compote, plus sticky toffee pudding. Both could easily be just too much at the end of a substantial meal, but these were surprisingly light and eminently finishable, thankfully. After that there was just enough room to squeeze in a Famous Grouse and an espresso before departure. I hear they do regular jazz nights now too; we may well return to investigate.

This two course dinner for two with two drinks each cost £39.70.

We had our wedding reception at the Talkhouse. Of all the venues we considered, the Talkhouse was the only one that had no extra charges on top of the price stated for the food and drink. No room hire, no chair hire, no corkage, no fee for putting our cake on their plates - in fact, they even surprised us with some little free extras! The menu was interesting without being odd and the food was attractively presented. They were entirely accommodating of guests' dietary requirements and last-minute changes. They seemed slightly disorganized during the planning, but on the day itself they didn't miss a single detail. The guests all seemed happy - we had many complements on both the look of the venue and the quality of the food.
HMB 9 Sep 2011
Today was the third time I have eaten here, and it underwent the most serious of tests- I took my mother! She approved, which is pretty high accolade in itself as she is definitely towards the, um, 'picky' end of the scale. Each time I've been here the food has been very good, and the venue itself is lovely, a traditional rural pub where they have cleverly opened up the space to let in plenty of natural light without ruining any of the character.

The venue is good, the food is good and it is safe to take even the pickiest of mothers. Excellent!

Ess 6 Aug 2010
The previous times we had been here, the service was poor and we were hoping things would have improved. Unfortunately, the service although OK was let down by extremely long waits for drinks, the main and puddings. We must have been served by every staff member in the building so it did seem a little disjointed. We also had to ask to see the Wine Menu. Lots of apologies but being told the food was 5 minutes away and then waiting 1/2 hour was very disappointing.

The quality of food was OK, nothing to write home about but the portions were very small.

We did complain about the slow service and in their defence, we were given a bottle of wine free. I'd recommend looking at other places, if you're looking for better portion sizes and good sevice.
Jeremy 2 May 2010
Went here with a friend recently. As I've experienced with this place before, the food can be superb and the service can be poor. Not that the service is rude, just inexperienced. The landlord needs to train them better and keep them on their toes! Highlights of the meal were the starter (we both had tempura black pudding with poached egg) which was superb and pudding (crème brulée and sticky toffee pudding) which were both very good. We both had steak, which, while cooked and seasoned well, was just a steak. The chips accompanying it were a bit too lardy and let down what would have otherwise been a very nice meal.
SRC 12 Oct 2009
Review this venue