Head of the River

Situated besides Oxford’s scenic River Isis… The Head of the River matches its food, drink and accommodation to the beauty of its surroundings. Whether you join us for an hour in the garden or for a night in one of our luxurious rooms, we’re confident you’ll hate to say goodbye. A popular outdoor summer venue (right on the river, heatlamps available), much frequented by students. Warning: may get busy around times of rowing events! Following recent refurbishment, The Head of The River now has 20 beautiful bespoke rooms, providing wonderful waterside accommodation in Oxford. 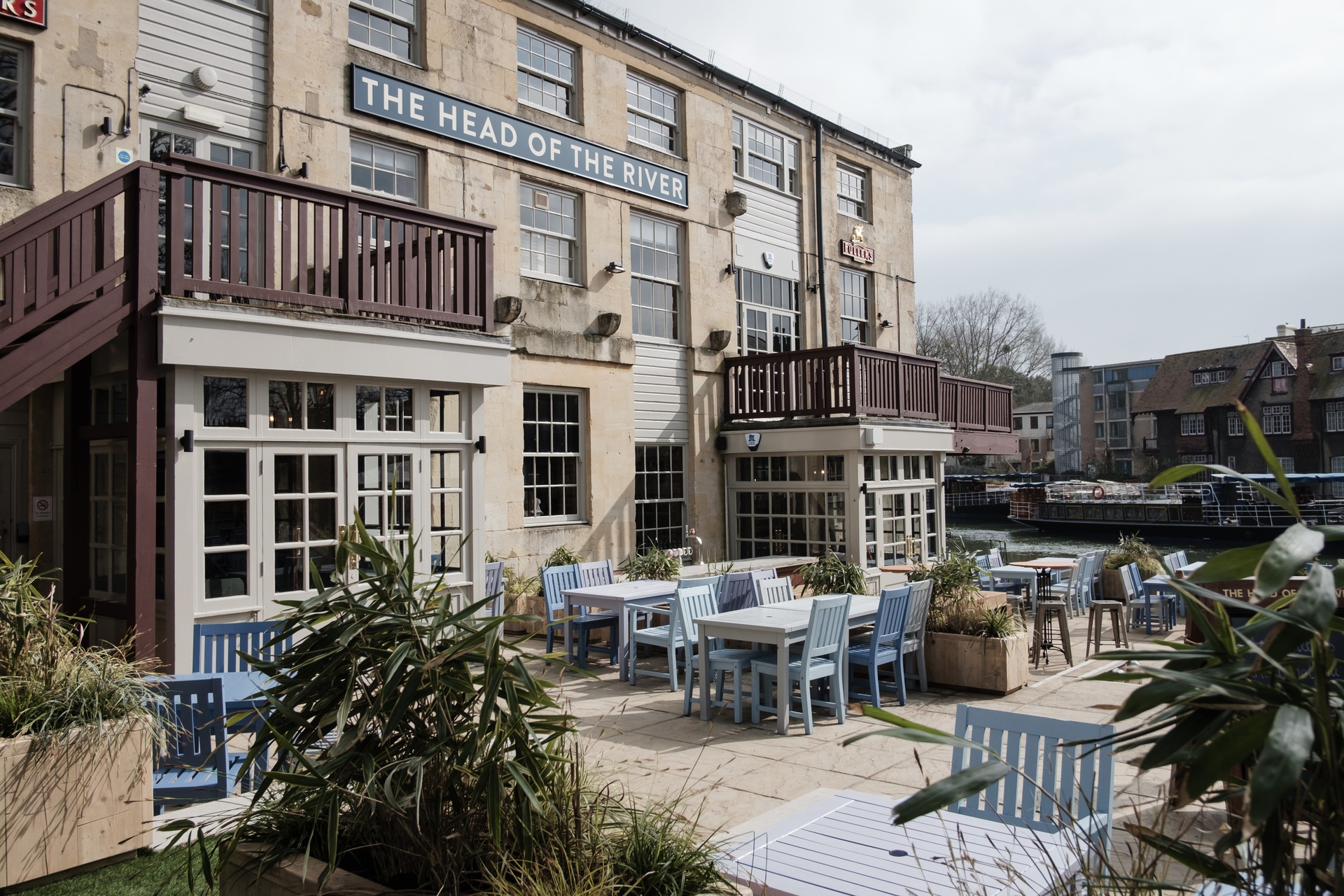 Have just spent two nights here and the setting is ideal for walking to the centre of Oxford. However the rooms were £130 per night and we have stayed in better rooms for less money. Breakfast was disorganised and cold the first morning so did not bother for the second day. Drinks too were expensive - £6.15 for a pint of lager and a coke. Disappointing, though we love visiting Oxford.
visitor 16 Jun 2011
Had a really ordinary and very overpriced lunch here. It would completely fail if not for its location. We were 8 for lunch and there was a 40 min gap between when the first and last meal arrived. Definitely will not be going back. It is nice to have a view of the river, but not that nice.
Jovni 22 Jun 2010
There is no parking on site - need to use a park and ride.
Mike 15 Mar 2010
I have never written a review of a pub before but I ate here at lunchtime today and felt compelled to. My wife and I split a 'Somerset Brie and Cranberry' sandwich and a portion of chips at the cost of 7.50 for the sandwich and 2.50 for the chips. Even half that price would have been too much to pay. The bread was plastered with butter and the cranberry element was more like the kind of topping you'd find on a frozen cheesecake. Please do not waste your money at this place.
Mary Cruz 20 Feb 2010
As a now lapsed regular, I so desperately wanted to enjoy a rare visit to our old drinking hole. Unfortunately, the food at the Head of the River seems to be much the same as it always was; pricey and mediocre. They have a rather exciting looking Autumn menu which focuses heavily on local produce and includes lots of game and seasonal fare – good stuff – but the dishes we were served failed miserably to live up to our expectations. We were celebrating a friend’s birthday, so rather indulgently ordered starters as well as a main for our lunch and with everyone swapping and pinching off each others’ plates, I think we did a good job of sampling quite a range from the menu. I started with the dressed crab, which at £8.50 was not a cheap option. The menu informed me I would have fresh crab meat, served in a shell, with Marie Rose sauce. It came drenched in a very pale sauce, which tasted more like mayonnaise than Marie Rose sauce and was far too rich. Olive oil was poured (not drizzled) over the accompanying salad and crab and the whole thing just needed to be lighter and fresher. The bread that came with it was good – 2 small rolls, 1 crusty white and 1 soda bread, which were warm and halved for ease of spreading, but again there was too much of it. The ducks we fed following lunch would disagree with that. My partner ordered a game terrine, which was presented as a pile of chopped offal and although he liked it (as did I), its presentation let it down somewhat. Our friend ordered the French onion soup, which was very oniony, and very good.

By this point we were rather full, bitterly regretting our decision to order starters and so were perhaps not in the best frame of mind for our main courses. I ordered from the specials board and had a baked sweet potato with a spicy chicken topping, which was quite good. I remember thinking how nice it was to be able to order something very different to the standard dishes usually on offer. The spicy chicken was quite sweetly spiced and reminded me of Moroccan cooking, my only gripe with it really was that the Chef had not used ground spices and I kept crunching on large gritty chunks, which I found off-putting. My partner ordered the burger, which looked fantastic but was easily enough to feed two, and he is not a small eater! Squeezed between a not-insubstantial artisan roll (with a rather sweet little gherkin flag jauntily stuck atop) was the meat pattie, cheese, fresh tomato and 2 huge onion rings. He complained that the meat was overcooked and the whole thing was just rather daunting and over the top, but did say that the chips that came with it were fantastic. Our friend was hugely disappointed with his pheasant, which he was expecting to be quite rich and hearty. Unfortunately, it arrived very pale, rather limply draped over some mashed potato with a strange red sauce streaked on the side of the plate. I felt pretty sorry for him, especially when I saw his crestfallen expression as it was presented! He described it as being ‘a bit like chicken, but drier, with strawberry sauce’. I decided against sampling it myself.

I suffered food envy seeing the fish and chips and the steak and ale pie whizz past, as they both looked great and reasonably plated. I think the Head of the River should really think about striving for excellent pub food and tone down their portion sizes!

Anyone who’s ever visited will already know this, but it gets shockingly busy. We waited a good hour for our starters, though we were warned of the time delay when ordering, so you can’t really complain. Drinks are pricey and the wait at the bar, torturous, but it’s a really beautiful pub and the best place for a drink on a sunny day.

I’m still torn and I still keep going back, albeit less frequently these days. A few tweaks here and there and some pricing that’s kinder on the wallet and it would be absolutely perfect. If only…
Dr Mukti 13 Oct 2009
I stayed here for several nights in April 2009 and I will go back when I get the chance. They are busy, but I found the staff friendly, the room comfortable, breakfast included and plentiful, the food good and the beer well kept. What could be better than a pleasant afternoon or evening (or both) on the patio looking over the river and enjoying the lively atmosphere of students and townfolks having a grand time?
Al 27 May 2009
A great summer pub for location but this place is over-priced - both food & drink. Bar staff are friendly enough but the management are surly. Go here to enjoy a warm day outside and remember you are paying for the location. You'll get a nice feed here too but you'll pay over the odds for all of it and service is dubious.
Ben 11 May 2008
Great spot. Shame its overpriced! Their problem might be that they had 6 or 7 staff behind the bar on a relatively quite night. Mostly nice looking lasses which I'm sure is great 'eye candy', but you're paying for their wages. I'm an ex-Londoner and trust me they're charging tourist/London prices.

The landlord would do well to invest in some quality barkeeps and fire the rest. Pass on the saving to the punters.
Dac 16 Oct 2007
I stayed at the head of the river in September for one night. The pub itself was nice but rooms are very poorly decorated for the money you’re paying. £85.00 per night is too expensive for a pub. Every time I needed the car I would have to go the bar and ask if they would unlock the gate and the manager would take 20 mins each time. A lot more choice of accommodation down the Abingdon road.
James 23 Dec 2006
My... time does fly! I was a regular sunday-nighter down at the Head Of The River, back in the early 80s.
I walked into the old place för a touch of nostalga and pang! it hit me! The old girl is still quite the same, despite the umpteen or so face lifts.
Some of the present punters are snobbier, than they were back in the old days. But despite all these people with noses pointed skywards, the place has retained its integrity.
It`s worth the 5 minute walk from Carfax, if you fancy a pleasant summer evening drink. Enjoy a good pint on the outside balcony, which overlooks one of Oxford`s many rivers.
If you think the bar staff are too slow, or just plain obnoxious, just throw your beer glasses into the river and depart with a revengeful look on your face. We did in the 80s! So just keep up the tradition.