Eat, drink and be social!

The people who brought you The Rusty Bicycle have revamped the former Radcliffe Arms. Great food and a fun atmosphere. 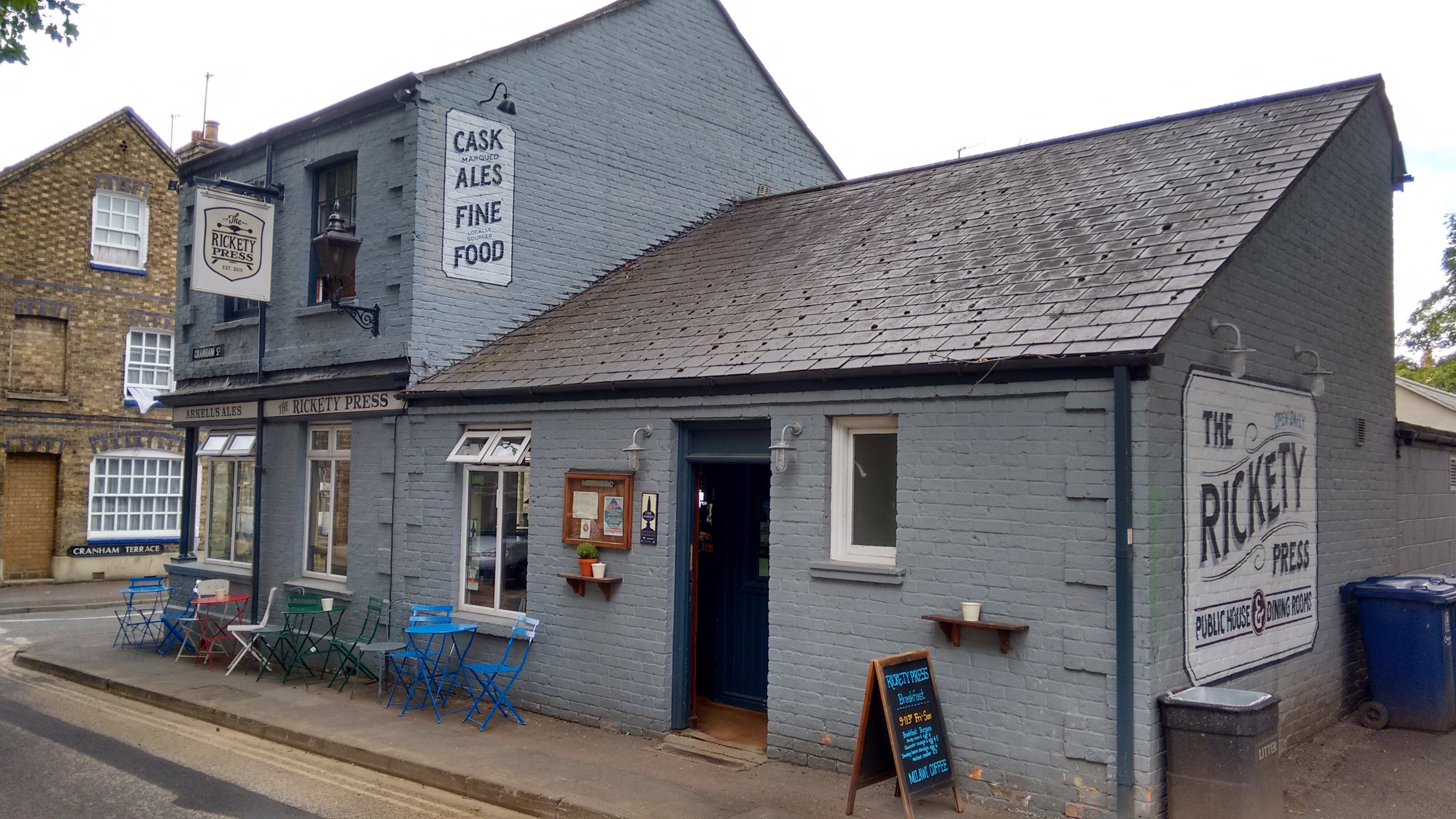 Grown up sibling of Magdalen Road’s Rusty Bicycle, The Rickety Press has been a firm favourite of Jericho residents for five years now. The grey-blue painted former Radcliffe Arms on the corner of Cranham Street and Terrace manages to be cosy yet spacious, stylish but not affected and friendly but not annoyingly familiar. It’s filled with chunky wood-topped tables, sometimes on Singer sewing machine pedal stands, and a mixture of tall bar stools and appropriately rickety chairs. The formalishness of the dining room is apparently to be scrapped in the 10-day refurb currently underway, and anyway we opted for the more relaxed atmosphere of the main drinking bit of the bar.

To our pleasant surprise we arrived during midweek happy hour, and immediately decided on the pre-seven £15 prosecco. The food choices required much more consideration though, as salmon warred with breaded mushroom burger, and roast aubergine green curry with all of the steaks. We could have come to blows over the starter options; smoked mackerel pâté and sourdough toast, crispy fried baby squid and aioli, quails eggs and smoked salt, grilled flatbreads and pea hummous or simple foccacia, olives and oil - where, indeed, to start? 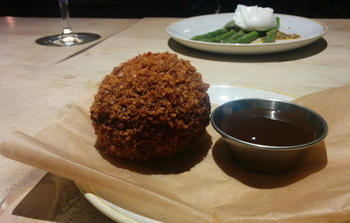 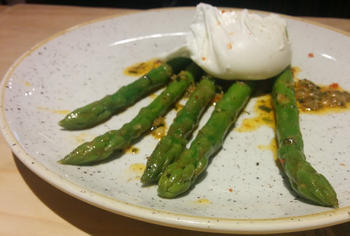 In the end I opted for the black pudding scotched egg, which comes with a big dollop of brown sauce, because I’ve never ordered another starter at the Rickety Press and to branch out now would make next time too difficult. Also it’s incredible. I was the first BPSE I ever tried, on an autumnal afternoon after a few hours of intense punting. I’ve never turned one down elsewhere since, but it’s also never been bettered. Hot, crispy and gooey, you’ll wolf it down in about 30 seconds. My colleague ordered the English asparagus with poached egg and tarragon butter. It was apparently very tasty, with lots of herbs and fancy un-overbearing rock salt. It was a bit on the cold side but overall yummy and not so filling that you don't want your main. More of a whet-your-appetite kind of starter. We chose well. 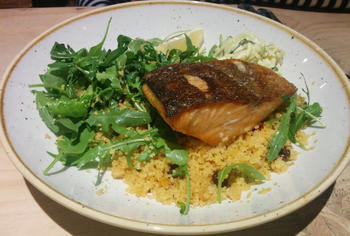 Salmon and steak won out in round two. Nat’s salmon fillet was found to be smoky and juicy. The accompanying celeriac slaw was crunchy and tasty with humble homemade mayo, and thankfully no secret onions. The cous cous was the perfect amount of moist, packing lots of flavour despite only containing a few tomatoes. There were many secret (un-menu-listed) raisins, but they weren’t too hard to avoid, and the secret rocket was a pleasant surprise. It was entirely forgotten that the dish was supposed to come with yoghurt though, as there was no sign of it. 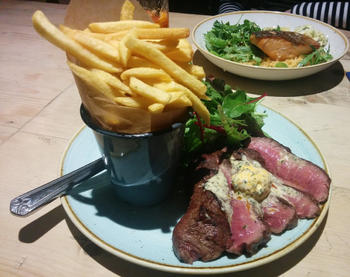 My grilled dry-aged flat iron steak was perfectly rare but basically cold. The knob of house butter plopped on top barely melted at all as it sat there. The fries were fluffy, crisp and generously supplied, and some nicely dressed mixed leaves completed the plate. The steak was super tender and juicy, it’s such a shame about the temperature.

After much dessert debate, and both being near full, we compromised on a vanilla affogato to share. Sharing would mean it barely counts and it’s also like having an after dinner coffee. Except it’s not! It’s so much better. It might sound like we’re a sucker for a gimmick or just like to childishly play with our food, but getting to pour an espresso shot over a glass of creamy ice cream all by yourself, makes it much more fun. It was exactly what was needed, and the perfect amount.

This is really good food, well thought out, and served promptly with friendly ease. It’s also the type of place you’d feel happy to go and work, have a coffee, or sit in the corner for hours playing homemade Jenga while nursing a pint. Let’s hope not too much gets changed with their updates, and bring on the re-opening party! 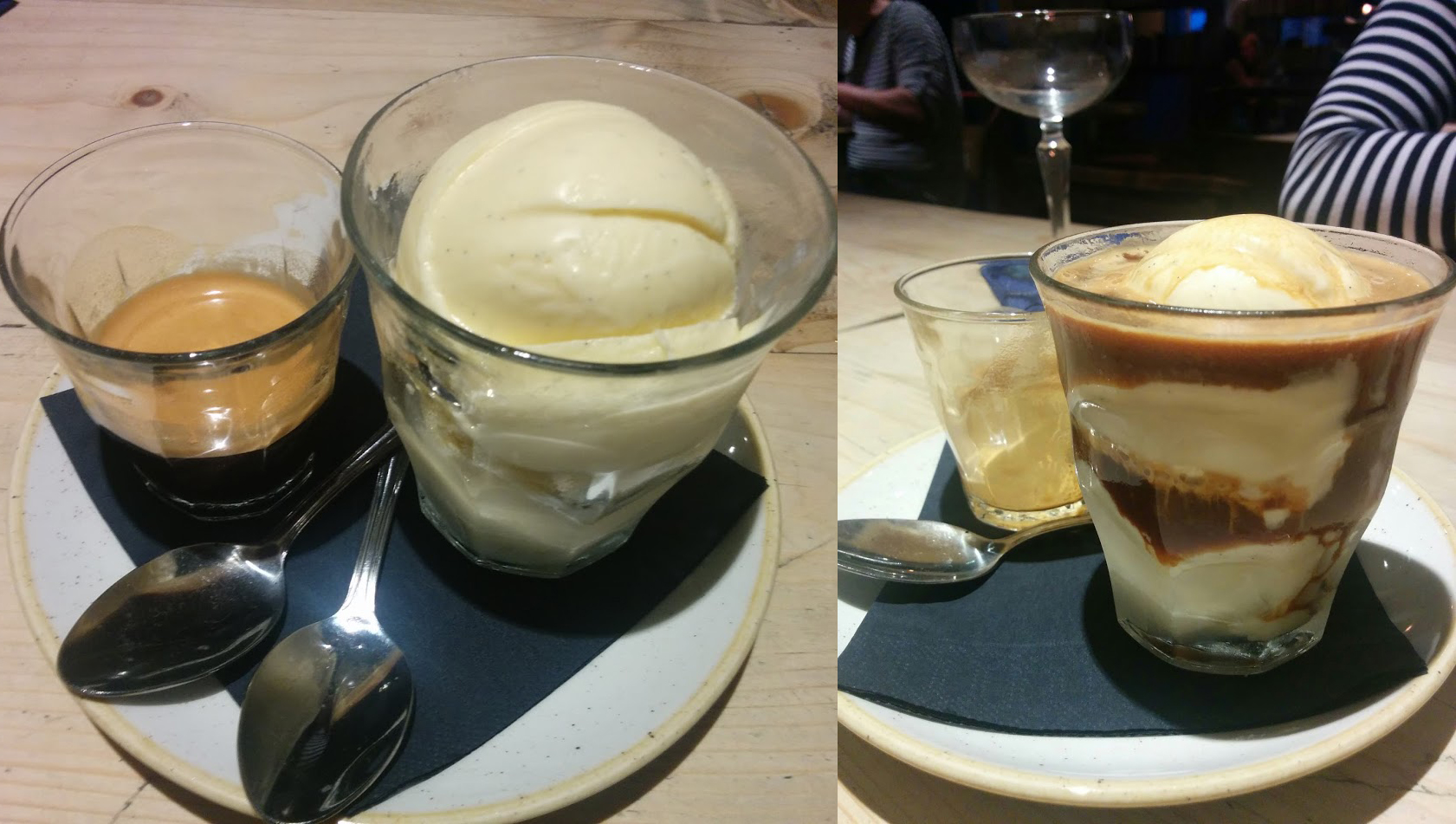 We went for Sunday lunch, 9 + 1 child as a birthday treat. Unfortunately although we had booked the meal took over an hour to appear, portion sizes were ridiculously small, for example the beef was in fact 2 slim slices accompanied by 1 floret of broccoli, 1 yorkshire pudding, 2 roast potatoes and a smear of something which we guessed was parsnip based for £15. Although we asked for more vegetables we were told that we could not have any as they'd run out and anyway that was a normal portion by their standards! The staff were snooty and inattentive. When we asked for a dessert menu we were told that only 5 of us could have one as they had run out. We ordered some ice cream for the child and it arrived as a tiny scoop in an espresso cup for which we were charged £6! Our bill came close to £200 and we all felt annoyed. If it had not been a friend's birthday I would have walked out.The décor was very eclectic, I personally liked it but it was a bit pretentious with artistically arranged piles of books and the odd new chandelier! The bar staff were great, friendly and attentive. But for value for money I would not rank them very highly! The vegetarian options were as always very limited.

I love this place and am so pleased that it is only 200 yards from my door.

I send all my guests to eat there when they are renting my house round the corner.

I cannot fault it, it's just sad that it is no longer a 'best kept secret' - now everyone knows about it!

Great food, a regularly changing menu, nice bar, and fun to have a casual lunch in a booth or smarter supper.

pandora 27 May 2012
If they could export this as a franchise to China they'd make billions. The only thing missing is an open fire. However, if they had one they'd have to use a crowbar to get the customers to go home.
stevep 20 Jan 2012
Great venue.

Only quibble: staff very pushy to push extra drinks and extra bread and extra olives onto customers. It's one thing to offer. It's another to push them relentlessly: at some point it stops being customer service and starts being something less pleasant!

tableaux79 17 Nov 2011
Just swell. Great atmosphere, food and proprietor. A hark back to 'ye good olde days' of public houses. Well done sirs!
JoyInTheMorning 21 Jul 2011
I went here for lunch today with a friend. I am really impressed at how clean and smart it looks. Fantastic refit. Service was quick and friendly and the food was wonderful. I had the Moules Frites from the specials and my friend had a roast beef sandwich with a lovely salad with lots of rocket.

Really impressed, definitely going back!
Tony Brett 20 Jul 2011
As a long term Jericho resident, I popped in last night. Excellent is all I can say: clean, friendly and an OK selection of beers, possibly lacking in variety. I'd say, a job well done lads, and I'll certainly be considering this a local option along with the Viccy. Particulary well done in opening out window space - well thought out.
barnes69 8 Jul 2011
This was good. Moonlight on draught and a few wines by the glass, short menu but pretty solid, service casual but OK. Drinkers at the bar and an atrium for dinner tables. Will go again. Better beer and food as good as the Punter.
howler 22 Jun 2011
Review this venue