Pub-flavoured gig and DJ venue where the Gloucester Arms used to be, opened Dec 2012.

Delivery available through Deliveroo. izza and a pint is what we believe in. All of our ingredients are carefully selected by our Italian head chef, with our best ingredients imported from Italy every week. We make our dough fresh every day with high quality Italian flour. Our toppings are simple and authentic, our flavours are fantastic. Plus we have a number of gluten-free pizza options made in Oxford by The White Rabbit Pizza Company – officially the best gluten-free pizza you’ll ever eat! 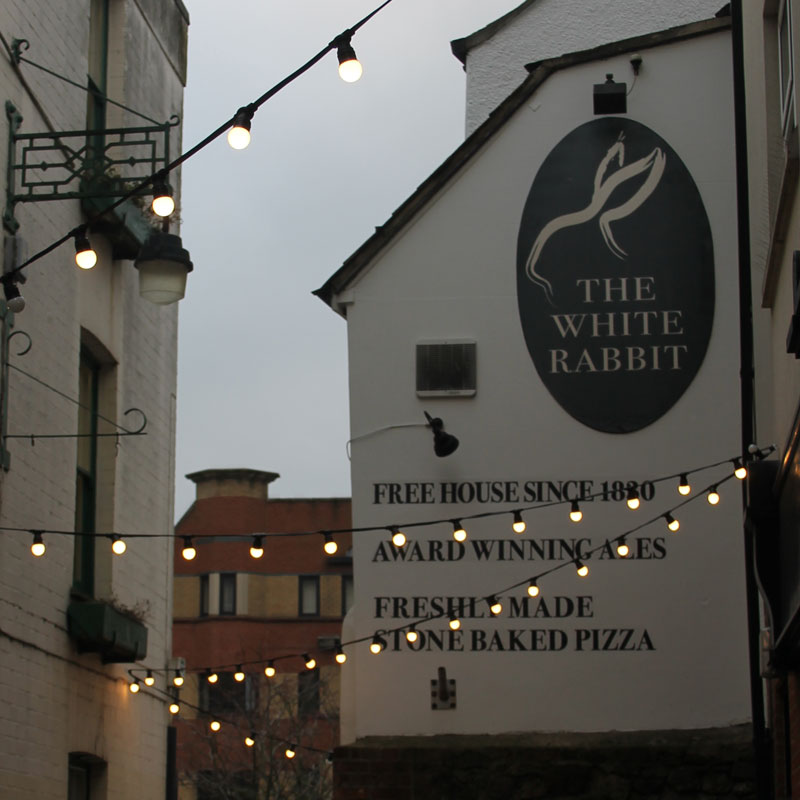 Tucked away in the deceptively unappealing Friars Entry, the White Rabbit is something of a poorly-kept secret in the heart of Oxford. With a combination of great food and drink, friendly staff and smart aesthetic, it is no surprise that this pub is favoured by students and visiting celebrities alike. I went along on a quiet Saturday lunchtime when I was a bit poorly and therefore not drinking, though I did check out the drinks menu. There were a wide range of very reasonably priced wines and beers, and the menu is supplemented by handwritten chalkboards adorning the bar, with details of house cocktails. The variety of soft drinks available, combined with everything else the pub has to offer, means that tee-totallers can still enjoy themselves.

The aesthetic was ‘smart rustic’: wooden furniture finished with condiments in emptied glass spirit bottles, all set against tiled floor and trendy light green paintwork. Elements of quirk and personality were scattered among the decoration, but not in a way that felt busy or too deliberate. The overall impression was a bit like the cosy living room of your coolest friend, with a relaxed and friendly atmosphere to match, complete with chilled music that was not too loud.

We were greeted warmly by the barman, who remained friendly and helpful throughout our visit - always a good sign! This helpfulness was summed up when my friend attempted to order a coffee. Although hot drinks are not on the menu (a shame), the barman explained that there is a machine out back, primarily for staff, which meant that the desired espresso could be obtained - so they’ll go out of their way to be accommodating to even the most needy (caffeine-deprived) of diners. Queries and minor tweaks to our orders were met with no quibbles at all, with the food arriving pleasingly quickly. The food itself hit the spot beautifully. I opted for the calabrese: a pizza without the tomato base, mainly out of curiosity. It is a credit to the chef that the cheese (mozzarella and parmesan) maintained a silky harmony with the base that I had worried would be missing without the marinara, while the Nduja sausage provided a hearty kick. All this cheesy glory rested on dough that was soft, chewy, crispy and floury in all the right proportions, and was complemented by the most enormous side salad I have ever seen. After all that, I somehow managed a dessert: a deeply indulgent chocolate brownie laced with just the right amount of salted caramel.

My vegan friend reported that her fresh and colourful vegan pizza (with vegan cheese removed, on request!) was also mouthwatering. She did, however, feel mildly disappointed that there was only one vegan option on the menu, given how celebrated the pub is as a vegan-friendly venue. Ultimately we agreed that the food is brilliant for those who want to soak up their drinking with good-quality food, if not necessarily for those seeking an authentic Italian dining experience.That said, it served as a wonderful spot for lunch, and the off-peak hours allowed us to avoid the (justifiably) heaving crowds.

It isn’t difficult to see how this pub enjoys an enduring popularity as it gets so much right: fantastic value (especially given the central location), great grub, friendly and well run - a combination that will ensure that every visit is enjoyable.

As someone on a gluten-free diet*, pizza is one of those rarities that is often craved and seldom enjoyed. Supermarkets have, of course, attempted to create and market a substitute - but even the best are only pale imitations (quite literally - the reliance on rice flour tends to leave gluten-free food looking rather anaemic).

In this context, the White Rabbit's offering was genuinely impressive; gluten-free pizza with a thin and crispy base, that didn't look too different from the 'proper' pizza that they were serving.

Perhaps surprisingly for somewhere so close to the centre**, the White Rabbit was rather empty when we went for lunch; at one o clock, there were plenty of tables available. The clientele were mixed - almost ostentatiously so - with a young family occupying one corner, and a couple of students hemmed in by tourists with conspicuously large cameras. You might have been forgiven for thinking you'd walked into a focus-group.

The menu was, broadly speaking, Italian; a mixture of antipasti, salads, and pizza (as a side-note, the doughballs, which we didn't order, have the option of being served either savoury, with garlic butter, or sweet, with nutella (!)). All of the dishes were reasonably priced - with nothing on the menu costing more than £9.50, and most hovering around the £6 mark.

The pizzas had a generous number of topping combinations (far more extensive than the menus at the familiar pizza franchises) - and it's worth mentioning that vegetarians are very well catered for. As someone who has, for years, had to order salads when friends have suggested we go for pizza, it's quite refreshing to see salads that sound not only tasty, but filling; the "White Rabbit Salad" boasted baked goats cheese, roasted peppers, and a 'balsamic dressing' in addition to the greenery.

With a combination of friendly and speedy service (at the White Rabbit, you order over the counter, and the food arrived at our table within about 15 minutes), it's well worth a visit. If there's a gluten-free eater in your life, the best selling point is that the pizza was really, genuinely tasty.

** You'd be hard-pressed to find anywhere more central; hiding away in Friars Entry, the White Rabbit sits about a minute from Gloucester Green, and about two minutes to Cornmarket.

Though the pub's name is evidently taken from Alice in Wonderland, it's quite refreshing for Oxford to have a modern city centre bar which doesn't market itself based on being a traditional, ye olde drinking-hole where famous Oxfordians may or may not have perhaps once drunk. The White Rabbit's simplicity, in regards to its décor, menu and atmosphere, is cool and welcoming.

The menu, which features mostly pizza, with a nominal pasta dish and a couple of soups too, was slightly lacking in vegetarian options. Only the soup of the day and one pizza were meatless, however, I imagine the chef would be happy to remove a meat ingredient from a pizza if asked. I eavesdropped on a couple nearby asking to share one pizza but have it split with 2 different toppings on each half, and this request was happily accepted and delivered.

There's a good wine list, but only a few are available by the glass and the bottles are not cheap so this could be slightly limiting for wine connoisseurs. There is also a good selection of local White Horse ales, as well as your usual mixers and soft drinks.

The food is basic but comforting, and served satisfyingly quickly. The pub setting means you can have a more relaxed meal, ideal for sharing or chomping down on a quick bite, all while having an affordable, flavoursome and filling hot dinner. As it stands it's unlikely to become a foodie destination but for the lowlier amongst us looking for a good value dinner that hasn't come out of a freezer pack it's spot on.

The dough balls come highly recommended, they are a very tasty pub snack delivered piping hot in their basket with a pot of garlic butter filled to the brim. There is also a variety of Kettle Chips, notable mainly for including the slightly addictive new sour cream & onion flavour.

Situated near 3 of the town centre's theatres and 2 cinemas, The White Rabbit is excellently placed for a pre-show meal or post-show drink. The atmosphere is very convivial, and although run by (very friendly) trendy indie boys in beanie hats, there is a really pleasing mix of Oxford people, from young to old, individuals to couples, and large chattering groups.

The pub also runs an open mic night Tuesdays, and hosts events regularly, from music to play readings. With plenty of reasons to return, The White Rabbit is fast becoming the city centre's new ‘local'. As far as I can see the only danger is that everyone else looking for somewhere independent for a drink and a bite in the centre finds it too.

A friendly pub where you can usually find a seat. The bar and food prices are very reasonable indeed. The menu is short and sweet but does it well - freshly baked pizzas, tasty garlic dough balls - the soups and stew sounded good too.

Visually the pub offers a good mix of fresh, clean decor and old features, with plenty of cosy nooks and crannies.

Exactly what the centre of Oxford needs!

jo_* 11 Jan 2013
The Gloucester Arms is dead: it's now The White Rabbit. It is a new music venue, has cinema showings and they are selling food again. I had a sample of the garlic bread and it tasted excellent. I'm not in a position to give a full review of the pub because I've only been there once and still adjusting to how different it is to what my favourite pub used to be. I don't mean to sound horrible, it is a nice family-run place, but you'd never believe it's the same pub.
The Dancingman 24 Dec 2012
Review this venue