All day dining pub, delicatessen and bistro concoction brought to you by the talented minds behind Jacobs & Field. Open July 2013.

Jacobs Inn is situated in the beautiful parish of Wolvercote, on the edge of Port Meadow. Fish from Brixham, game from the Cotswold's and specials that change twice a day – brilliant food at a big happy pub near Oxford. Their idea is all about having good people, a love of whole hearted robust British cooking, locally sourced meats (we haven't told the pigs in the back garden quite how local; yet!) and a welcoming space to enjoy our wears. Inside all is airy, rustic, beautiful, with old tongue-and-groove walls and wide plank floors, books to read, chesterfields to recline on, and a fair few stuffed animals on the walls (very à la mode). Dogs doze by the fire, children tuck into baby burgers, and in summer you spill into the grounds, with picnic tables, deckchairs and great big terrace. 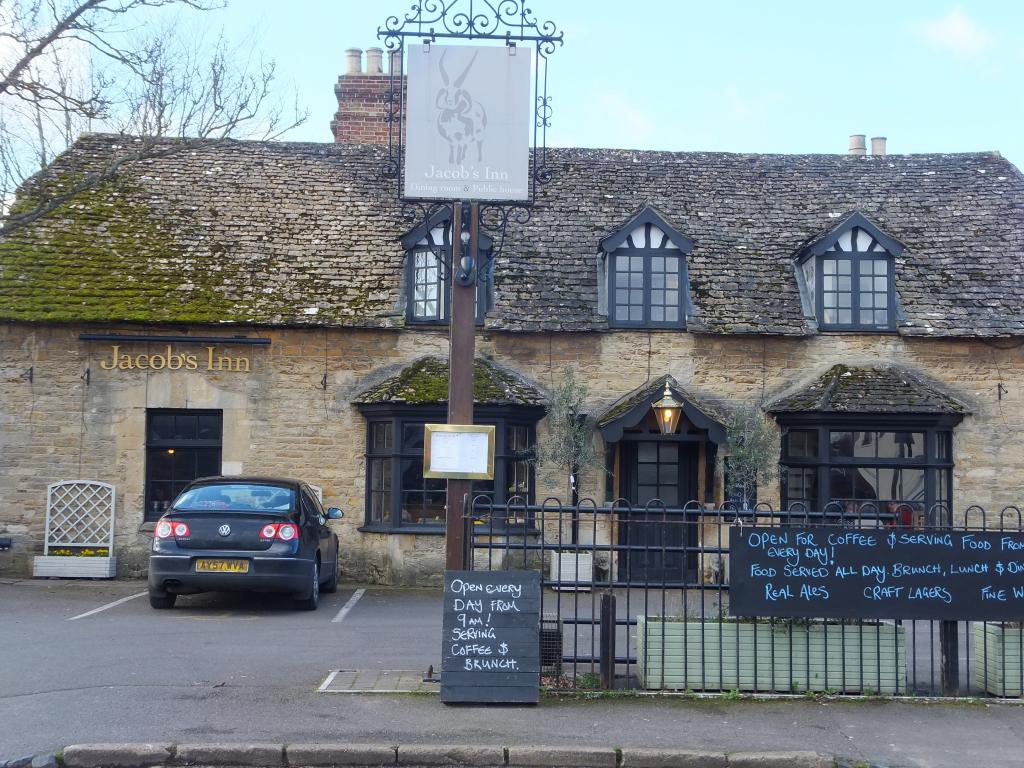 Who is Jacob? He seems to be taking over the Oxford food scene. Between Jacobs and Field (the café in Headington), Jacobs Chop House (the meat palace), and Jacobs Inn in Wolvercote, he's got crowds flocking across town to try his fantastic fare. Worried the bandwagon was leaving me behind, I set out across Port Meadow on a culinary expedition to the pub end of Jacob's empire.

Jacobs Inn has been situated as somewhere between a traditional pub, a top restaurant and a muddy field. Cosy in winter, but offering deck chairs for long summer evenings, it's always been a popular choice throughout the year, especially when combined with a lazy walk across Port Meadow. The décor has retained the original beams and rustic look, while edgy rusting signs and bottles filled with fairy lights line the walls. The food is ambitious, trying to blend traditional pub fare with more sophisticated flavours and ideas. To this end, lots of the meat and fish served have been locally sourced from the Cotswolds and Brixham, and the pub even keeps pigs and chickens in the garden. It's more than an organic gimmick - the owners and chefs have really committed to the cause and it's reflected in the quality of the food and the ethos of the place. To start with, famished from the trek, we had wood pigeon with beetroot, pickled mushroom and walnuts, and from the specials menu, smoked duck on chicory salad with a redcurrant dressing. Both dishes were immaculately presented with vibrant colours and real attention to detail, but the flavours just didn't match up. In the pigeon dish, each individual ingredient was cooked beautifully: the meat was tender, succulent and warmly flavoured and the walnuts were nicely paired with the beetroot. However, once put together, the beetroot and the pickled mushroom were completely overpowering, blasting straight through and masking all of the pigeon's subtle smokiness. The same issue, to a lesser extent, happened with the duck. The smokey flavour pushed through, providing better balance, but the chicory added too much pepper to properly compliment the duck's subtlety. Both dishes deserved to be fantastic because there's clearly some serious skill in the Inn's kitchen, but it's a real shame that overemphasis on invention has prevented the fulfillment of potential. The mains, however, were really impressive. The slow-roasted pork belly with garlic mash was tender and juicy, with overtones of honey. The cabbage, which could have been a soggy mistake, was peppery and crunchy, with the green beans being 'squeaky clean'. In the words of my dining partner, it was 'presented like a restaurant but tasted like Mum could have made it.' For any good roast, that's the highest praise there is. I looked again to the specials and chose the bass with lobster mash and saffron sauce. Sourced from Brixham, I expected real freshness and flavour, but having had fresh, line-caught, mackerel a few days before, it was never really going to be able to compare. That said, it was still fantastic; a really full texture well complimented by the sauce, which was really more hollandaise than saffron anyway. The lobster mash was stunningly rich and packed with flavour - next time I'll definitely be getting the lobster dish - while the braised fennel worked well with the other flavours. To finish off, we went for the frozen parfait and some lemon cheesecake, which were both pretty solid choices. Although the food is on the more expensive side, with mains starting at around £12, for the range of tastes it is worth it for a good night out. What's really worth mentioning is the wine list. It's short, but packed with some great stuff. There's even a Rioja Blanco at the top end, a very fashionable white at the moment. But at the lower end of the price range, bottles start at about £20 and are really solid value, offering high quality and well-pitched pairing options. Praise needs to be given to the staff for their incredible service. With a packed restaurant and only two waiting staff, food still arrived very promptly, with loads of attention paid to every customer. Jacobs Inn is a treat, and the chefs are adventurous, sometimes missing a swing but mostly turning out great pub food.

Have had a couple of good meals at Jacob's Inn, but took two friends today and was very disappointed. Slow and surly service, food undistinguished - as one of the friends said, the roast potatoes tasted re-heated. And got no response when I mentioned to the server that we were disappointed.

The Red Lion is now long gone, and the new establishment resembles it only insofar as it occupies the same premises. First thing to get straight - this is by no means a local boozer any more - it's basically a restaurant with bar attached. Some locals have bemoaned the departure of The Red Lion, but towards the end it was looking tired, and its food offering was often poor. (For anyone looking for a local pub, The White Hart is a matter of yards away.) I visited JI a couple of weeks ago, and was impressed with the food and atmosphere, not so much with the service. Visited again last night, and thought the service greatly improved. Maybe the place opened before they had quite got their act together? Be aware that that this is not a cheap place, but you can have sandwiches or light dishes if you don't want a full meal. The food is relatively simple - no nouvelle cuisine here - but not so simple that you could knock it up in five minutes at home. Last night I had schnitzel with a fried egg, anchovies and capers, sauté potatoes and salad - the portion was substantial, and it was lovely. With a large glass of decent chardonnay, my bill came to just under £20. On a Thursday night, the restaurant was almost full - clearly, Jacobs Inn is filling a niche. Recommended.

I really want to like this place, and they're clearly trying to make it look amazing, but they haven't worked out how many people they can sensibly deal with at once.