The Fox and Goat

The Fox & Goat is a beautifully refurbished pub, conveniently located on the Oxford Rd (A418) between junction 8a of the M40 and Thame. We serve delicious, fresh food in comfortable surroundings with welcoming and friendly service. We are also very proud of our spacious, modern, en suite guest bedrooms. If you are looking for a place to eat, drink or sleep then you have come to the right place! 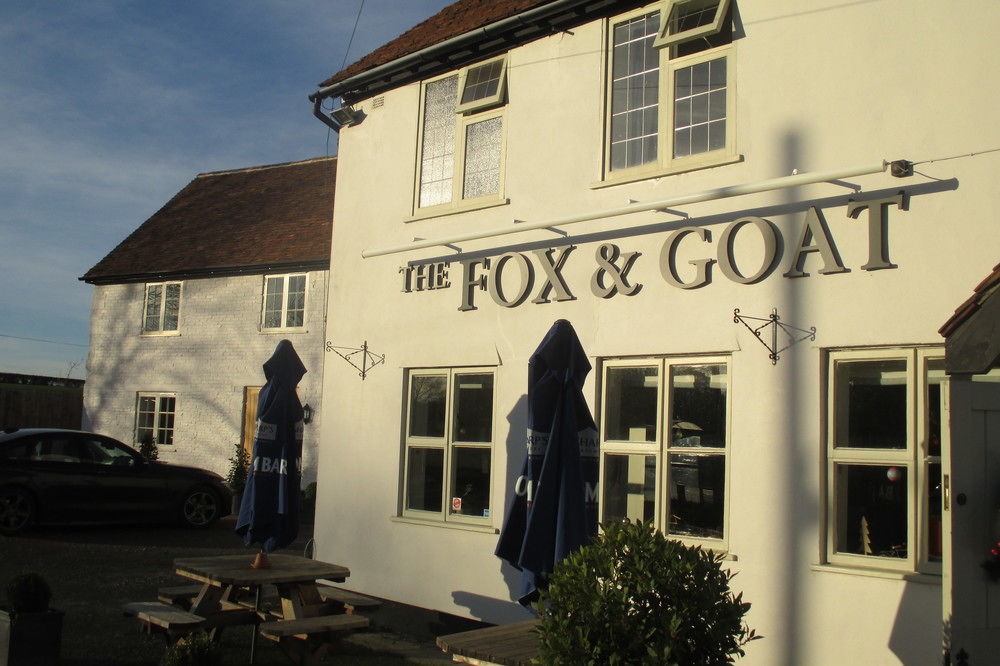 The Fox and Goat has the appearance of a quintessential English country pub. While there’s a decent range of Oxfordshire ales, a large garden with plenty of picnic tables and a loyal band of locals, the quality of the food is where this pub stands out.

A little out of the way for most dwellers, the interior is ‘typical cosy English pub’, complete with wooden beams, wooden tables and wooden chairs, and we received a warm welcome. The waiting staff were very attentive throughout and knowledgeable about the food on the menu.

When we visited in mid-July they were still serving from their spring menu which was an advantage as it was more adventurous than their current ‘summer’ menu. After much deliberation, we selected our meal, sipped our Oxfordshire ales (Hobgoblin Gold and a Brakspear ale) and waited eagerly, watching jealously as huge portions of burgers and steak were delivered to our fellow diners’ tables. To start my partner chose the asparagus, with ham, a poached duck egg and mayonnaise (£8.10). A well thought-out flavour combination on paper; the reality was disappointing. Three stalks of fresh asparagus formed a raft on which perched the admittedly perfectly cooked poached egg accompanied by two stiff crispy waves of cooked ham. We both firmly agreed that ham does not need to be cooked – it ruins it to do so! The mayonnaise was mustardy and the sizable dollop threatened to overpower the petite dish. My starter was worse; pickled spring treats, beetroot gel, goats cheese fritter (£7.10) which again sounded great - a fancy ploughmans, I thought. I was presented with a minute plate of very firm vegetables (including fennel, an assortment of mushrooms and tender stem broccoli) which were tricky to cut without sending them flying across the room and were eye-wateringly acidic, a beetroot gel which was more like a paste than a smooth gel and goats cheese - the elementI was most looking forward to sampling - wasn’t in fritter form. There were a few blobs of cheese but no sign of any batter. The saving grace of the dish was the soothing creaminess which the cheese provided against the harsh acidity of the pickled ‘delights’. What irked us the most was that after seeing plenty of generous mains being distributed, the measly portion sizes of the starters was very disappointing, especially given the price. (Since reviewing, I’m pleased to say that the price of the starters, in fact of the whole menu, has decreased but so has the ambition which is a little sad to see.) Thankfully, the mains were outstanding, wiping away most of the bitter taste from the start of the meal. I opted for pub classic fish and chips (was £13.95, now £11.95). I’m a firm believer that you can tell the quality of a pub’s food by trying out their fish and chips or burgers. I was presented with a huge portion of fresh cod in a light beer batter which was crispy, and perfectly cooked – the fish was still moist and melted in the mouth. The dish was not overly seasoned, the mushy peas weren’t messed about with by adding cream/mint and were very similar to proper chip shop peas. The massive chips, akin to roasties, were exceptionally fluffy but perhaps could have done with slightly more of a crisp finish and the homemade tartar sauce with chunks of gherkin completed this delectable main. Simple, fresh and fantastic.

However, my companion’s main of hake, puy lentils, cockles, fish broth, sea vegetables (£16.95) was not just pub grub, but truly of restaurant quality. Flaky chunks of hake in a rich, salty sauce with chunks of chorizo, lentils, cockles, samphire and pak choi looked and tasted gorgeous. My partner usually prefers his fish as under cooked (basically raw) as is possible so for him to say ‘I’m really impressed with this’ is high praise indeed! The manager later told us that it had been the most popular dish, with between 30-40 orders on Saturday evening alone, and it’s easy to see why. Dessert changes on the menu weekly, and we managed to squeeze in a sample. My rich chocolate orange mousse wasn’t too sweet, especially with the addition of orange segments, orange sauce, orange sorbet and a sprinkling of chocolate-covered honeycomb. Again, the portion size was huge, and this time I was defeated by its richness. My companion opted for the treacle tart served with clotted cream and honeycomb, which had a lovely consistency, was beautifully sticky and was the better of the two desserts.

Overall while I admire the ambitiousness of the starters, the strength of the Fox and Goat lies in their mains. I would urge them to keep their portions big, the quality high and leave the spring treats out for the goats…