Take the best in British pub culture, top it off with individuality, vintage character and an off-beat edge - The Jericho Tavern is what you’ll get. An irresistible fusion of fantastically tasty food, awesome drinks and lively atmosphere await you at this laid-back Oxford local. Whether you’re looking for a light lunch or social eats and treats with friends, we make it our mission to offer you the perfect place to kick back, relax and catch up. Just a five minute walk from the old city gates of Oxford, The Jericho Tavern is the very definition of urban cool, mixing a stylish contemporary bar, classic pub features and a handful of quirky touches. Pop out the back and you’ll discover the pub’s best-kept secret - its spacious beer garden, a rare treat for a city pub and an ideal spot to take time out. Renowned for hosting amazing live music acts, The Jericho Tavern is a vibrant local with heart, soul and personality. 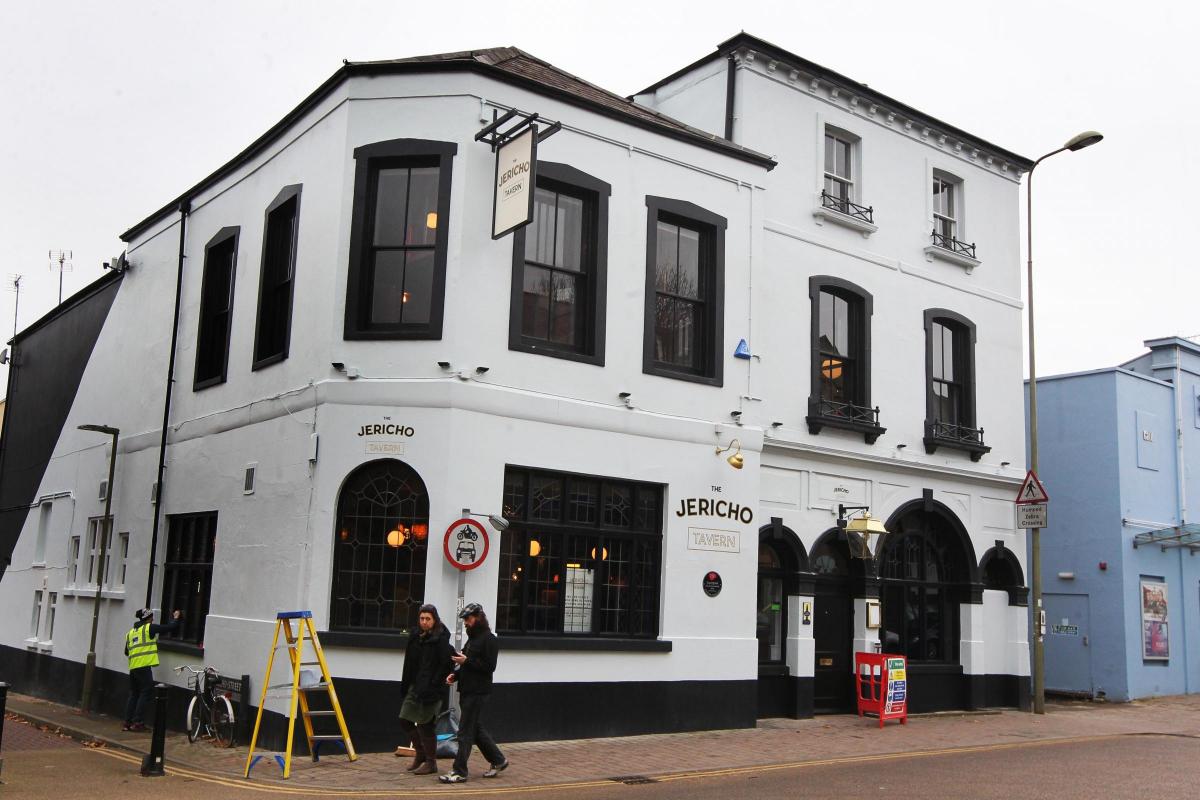 Coming soon at The Jericho Tavern

Tamara launches her debut album. An evening of music and surprises. More info
Fri 20th May

The Jericho Tavern on Walton Street has many strings to its bow. Not only is it a friendly pub with a good list of real ales, it also allows dogs in the main room, hosts many great live gigs and events, serves a big selection of nice food, and as I learnt last night, has a really nice and fairly big garden full of greenery, pretty lighting and comfy chairs; a real hidden gem in the heart of Jericho behind the pub.

I have had many lovely meals there at winter time in the main room, but this summer meal in the pub garden was a new experience. As the sunlight gradually faded, the garden remained well-lit and the wall of fairy lights sprang to life at around 9pm. The garden has two sections, including one which is covered (luckily it was a clear evening last night but it was nice to know we were safe even if it had rained).

For the meal, my guest and I shared the "vegetable patch" platter, which was a generous board piled high with vegetarian goodies. My highlight were the curried beans, which were deliciously spiced and well complemented by the chunks of crusty white bread which accompanied the platter. In general, the food was well cooked, mainly chargrilled or deep-fried; nothing was overdone. The rosemary and lemon breaded courgettes, for example, were almost raw and thus perfectly textured. Their lemon provided a further freshness, and the light breading was crisp and not too oily. My date with the chargrilled asparagus was also a very enjoyable, no-strings-attached affair, which I will remember with fondness.

Across the board, the flavours could have been more intense; the 'spicy cauliflower fritters' were not particularly spicy, and the houmous was mainly salty without the strong garlicky flavour which one might expect. My companion noted this with disdain, before experiencing the shock of a whole garlic clove which had been embedded in the melting camembert, in a moment reminding us both that you must be careful what you wish for!

With our meal, we had a glass of wine each. Mine was a sweet New Zealand white and my guest had a Californian rosé, and both were delicious and just what we wanted - the waiter at the bar was able to tell us all about all the wines available, which was impressive and appreciated. The staff were indeed very obliging in general; the service was fast, and they treated us in a friendly and polite manner throughout.

Our meal came to £32.60, for two glasses of wine, a huge meal for two, and a side portion of chips. We had planned to have pudding but there ended up being no space in our happy tummies.

I already liked the Jericho Tavern a lot, and now I like it even more - recommended!

Been there twice for food but never again. The food was horrible and the service was very slow, both times. Had to wait 40 minutes for a Sunday roast today and, when it arrived, the meat was burnt and full of fat and gristle. The best thing was the jar of horseradish sauce.

mp4man 29 Jun 2012
Menu lacking larger salads for summer. Just a side salad on offer.
Dusty 20 Apr 2011
Horrible! I will NEVER return. I had an issue with the service and made a complaint. Most horrid customer service on behalf of the responding manager. Sadly, the food was not good either. I think this place is over-hyped. Nice location, but people skills and service are lacking. Gives a bad name to British food and service.
zoineos 18 Apr 2011

Just a word of warning on the Jericho's much-feted music venue: very nice indeed, and certainly intimate and atmospheric, but possibly the worst-designed venue I've ever visited. The stage and half of the floor is up a step, meaning that only 1/2 the people at any given gig can actually see the band. I'm sure this is fine if you go to see a less popular band but if the night is sold out then you have to force your way to the front in order to see anything - unless you're exceptionally tall!

Hi oxford1! You have obviously never been to the 12 Bar Club on Denmark Street, London. Believe me, it makes the Jericho look like the Albert Hall :) - Ed

oxford1 3 Oct 2009
I think on the whole this place is a far sight better than it has been in years. I remember it before Radiohead even, and yes it was legendary - but time goes on!
Scream pubs were rubbish and no one should moan about paying a bit more for decent European lager because all UK-brewed lager is vile - anyone who thinks otherwise probably drinks Stella, so I rest my case!!  :)
Only fault of late has been the service. If I'm paying £3.40 for a pint of Erdinger I want it served in a clean, proper glass - it doesn't have to be branded but I suggest the staff should know their product better.
But it's a cool spot and the garden - with ferns etc. - is far better than the former car park, and really buzzes in the summer months.
barnes69 10 Dec 2008
I'm not sure why people call this place 'pretentious'! I reserve that word for stuck up places and people with over inflated egos. Let's get to the point. Maybe some of the beers could be a bit cheaper but come on; the place is a complete mix of people. Musicians, music lovers, Oxford University students and regular punters all go there. If you want to enjoy some great live music and a decent atmosphere there are really a few good places to go in Oxford - The Jericho Tavern is one of them.

The men's toilets have just been refurbished. Thank God because they used to be sh*t. There's nothing pretentious about the place. It's just a cool pub with a legendary music venue upstairs stuck in the middle of Jericho.
Ray 27 Nov 2008
One of the best music venues in Oxford - revived! Great acts have made it a point to play at the venue where the atmosphere is tops! I always know a few people there any time I go. The hot guys running the music venue have done a great job. x
Alix 7 Feb 2008
What a rip-off for New Year's Eve! £15 for one very average dad's garage band, plus Stornoway who are great and the only reason I bothered to fork out. Service was terrible, the "food" was a few nibbles barely worth mentioning on the tickets, and it seemed to the people upstairs that the bar staff were more interested in taking care of the people downstairs who hadn't even paid for the privilege.

This is a nice music venue, and good location but they just have to stop taking the mickey with the prices!
AnnE 3 Jan 2008
Again, another pub that I preferred as a Scream bar.

Why do they keep turning cheap boozers with good atmospheres into pretentious bars with outrageous prices. And why is it so bloody dark in the place you can't see a bleeding thing!

I like the return of live music upstairs though.
Matt F 9 Jul 2007
I've had some lovely dishes and snacks there. Beers are good and they have some of the best live music acts I have heard in Oxford! I can see why Supergrass and Radiohead made their name there. I think Frank had sorted this place out and it's seems to get better ever time I go!
Luke 28 Mar 2007
Sister bar to The Cape of Good Hope on The Plain, The Jericho was formerly a Scream pub, and whilst I'm glad that's moved on, what's replaced it has to be one of the most pretentious pub/bars in Oxford. Rip-off continental beers and an atmos that I'd consider gloomy rather than cosy. Music room upstairs. Has reasonable food menu. Beware if you're tall and male and in need of utilising the toilet facilities as the bogs here were built for midgets. Mind your head!
Joe B 22 Mar 2007
Review this venue

Previously at The Jericho Tavern

Christian Adore and Eaton Messe are a drag king and queen double act like no other. Join them at the Jericho Tavern for a monthly night of cabaret and comedy.

The Dragprov Revue is an improvised drag show hosted once a month by the Jericho Tavern. It’s a nice space which is normally absolutely ...