Summertown's only pub, containing several sports screens and a large outdoor terrace. Children allowed if eating with their families.

Combining the best in British pub hospitality with individuality, character and quirky charm, The Dewdrop is a lovingly restored 19th century inn at the heart of Oxford’s leafy suburb of Summertown. Housed in a listed building set back from Banbury Road, The Dewdrop is the perfect setting for a laid-back yet distinctly memorable drinking and dining experience. A cornerstone of community life in Summertown with local literary connections, The Dewdrop is a deceptively spacious pub that stylishly combines sumptuous period features with contemporary touches. Its best-kept secret is its delightful beer garden - perfect for laid-back afternoons, al-fresco dining or just a glass of something special on a sunny day. Dog-friendly and with a private function room for hire The Dewdrop fosters a relaxed, friendly atmosphere and holds the authenticity of a true British local close to its heart. 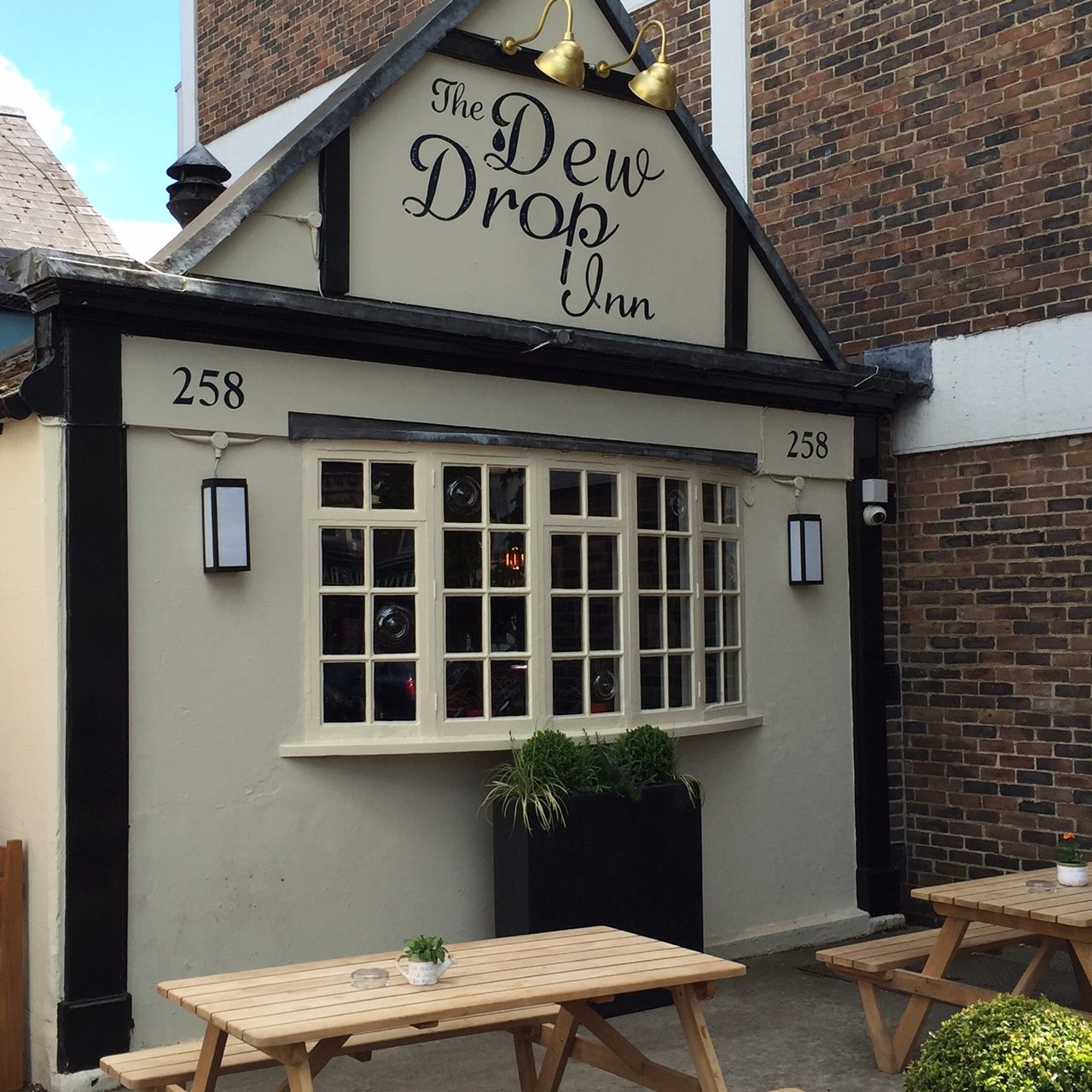 The Dew Drop Inn has been part of Summertown's food and drink scene for many years, and although the decor has changed over time, it has kept its place as a central point in this part of . It's a deceptively large pub, with tables out in front as well as a beer garden at the back, and squashy leather seats inside that make the place feel like a comfortable study.

It was just past noon, and very quiet, so I had no trouble finding a seat, and my food was with me very soon. I'd ordered the chicken schnitzel with fries, salad, and roast chicken mayonnaise - which sounded like an incredibly weird variation on the condiment, but which turned out to be subtle and savoury, complementing the chicken and fries very well. The schnitzel was crisp and tender, albeit a little bland - I would have preferred a bit more seasoning in the crumb, but the mayonnaise helped to pep it up. The salad was a flavourful mix of leaves, sundried tomatoes, sunflower seeds and pesto dressing, and the fries were crunchy and satisfying.

Overall, the meal was tasty and filling, and made for a quick and pleasant lunch. With a wide range of options on the menu, and an extensive wine list that I'm planning to try on my next visit, it's easy to see why The Dew Drop in is such a popular choice in Summertown.

I have just been in The Pub this evening. It is very nice traditional pub with nice furnishings and atmosphere was calm but it was replaced by friendly staff. Probably, it is just one real pub in Summer-town so it might be often busy. Definitively, I will go there again if I got a chance.

supermario 19 Apr 2013
My friends and I met up at The Dewdrop Inn last week as we wanted to eat somewhere in Summertown. I checked the menu while I was waiting for my friends to arrive and thought we could eat here another time also - it was very reasonably priced and there was a big choice of food on the menu. We decided to stay and were very satisfied. Food was cheap and very good. All of us without exception enjoyed our meal. The staff were friendly and the pub itself was nicely furnished. I will go back as I would like to try some of the other dishes on the menu.
Chele 10 Aug 2010
I visited this pub for a few pints and a meal on 21st April 2010. Very deceptive - much larger and nicer on the inside than you'd think from the outside. Nice furniture, decor, comfy seats, etc. Very well kept beer - Courage Best + 2 guest (Timothy Taylor's Landlord and Hook Norton Old Hookey at time of visit - the Old Hookey was excellent). Very good range of food, and value for money (the Beef Penang Curry was very tasty - although watch out, it's very hot!). The pub's part of a small group/chain, so a little bit 'standardised' I suppose, but well done and reliable. I'll certainly visit again when in the area - proably during the World Cup, to watch footie on the TV. I walked down to the pub (in Summertown) from the Travelodge at Peartree - but got the S3 bus all the way back). Give the pub a visit - I think you'll be very pleasently surprised. Some of the earlier reviews are harsh, and dated. It seems that things have changed for the better. Cheers!
Fluffy 22 Apr 2010
Recently went for a meal here - we won't be going again. The food tasted like plastic and the steak my partner had tasted off, to say the least. The staff were very rude and seemed to have little idea of what was going on. One of the worst pubs I have ever been to. 1/10.
14 Oct 2008
Excellent, well kept Timothy Taylor Landlord bitter.
Bert 21 Apr 2008
As my glass of draft coke stopped far short of the top of the glass, I asked if it could be filled up. I was told that as I didn't want ice it was tough, that's how it came.

Food was less than average.

Refreshers Addict 21 Feb 2008
Further to my review beneath - I visited again recently with my father and boyfriend and we had one of the best and most reasonably priced pub meals I've had in a long time. I went for the "pie of the day" - chicken and bacon in this case - which was delicious, well filled and obviously home-made. Vegetables were a little watery and unimaginative but not bad. My father had a steak and kidney pudding which he pronounced one of the best he has ever had - meltingly tender meat and unctuous gravy. My boyfriend went for the burger, which was also excellent. Most of the mains were priced around the £9 mark - very reasonable for the quality and area.

We will definitely be visiting again.
Katy 1 Dec 2007
It has certainly improved since the smoking ban. Going in used to take about 5 years off your life expectancy. It normally has an ok selection of beers. But there is still something deeply unsatisfying about the place - maybe it is the gloominess created by a combination of very few windows and brown walls!
Dan, Eynsham 20 Sep 2007
Despite reading the bad reviews on this site, I dropped in here because it was the only pub nearby. I was pleasantly surprised - it is nothing special, and fairly commercial, but the service was polite and friendly, there were plenty of comfy sofas and a large garden, and a vaguely decent wine list although only the usual lagers/commercially-brewed beers. Obviously there are also no longer the smoke problems mentioned by previous reviewers.
Katy 16 Aug 2007
An ex pat now living in France I "dropped in" to the DEW DROP INN and had a great few days there, the staff were very friendly and the food brilliant, the beer was great and absolutely no complaints
mich from penns 23 Jul 2007
An awful, awful pub. They have just renovated the place, but it is now worse than ever. The staff are rude, the place is full of smoke (even in the non-smoking area!) and the beer / wines are mediocre at best. To be honest, the only reason we ever go to the place is because we visit the excellent restaurants in the vicinity - Portabello & The Greek Taverna in paricular. And the Dew Drop is the *only* pub in town :( I agree with an earlier post - given the locality and the quality of nearby establishments, this should be one of the best pub venues in Oxford. Sadly, it fails to deliver.
Daniel Brown - no need for anonymity in this case! 11 Feb 2007
I have been going to this pub for many years....only because as a local, there was no where else to go.

A truly awful place, that has progressively got worse - the greatest shame is that it could be so good (think location/size/abundance of intelligent locals).

Finally, it is the most female un-friendly pub I have ever been into. All my girlfriends over the years have quickly and resolutely decided that it was not somewhere they wanted to go!

I don't know who the brewery is now, but for goodness sake, they should get a grip - get staff who better reflect the clientelle, are welcoming and actually want to do the job with some humour and relish.

7 Dec 2006
I don't know why the reviewers on here have such a downer on this pub - it's friendly, has a decent range of well-kept real ales, does good food, and has a reasonable-sized beer garden, as well as some seating at the front (if you don't mind drinking while breathing in traffic fumes). There is a small and smoky public bar, as well as a larger lounge area, one end of which is no-smoking. Currently being renovated - I'm hoping it's not being turned into a 'trendy wine bar'
Mike 20 Nov 2006
Possibly only survives because there is nothing else around.
Anon 20 Aug 2006
To be honest, the worst, most unfriendly pub I have ever drunk in. We were kicked out because some kids, who we have never seen in our lives, were drinking about 300 metres down the road, not given an explanation and then threatened with a glass and an ashtray by some one who was drinking with the manager! As a young professional women, I found this totally unacceptable. I am 24 years old and have drunk in just about every pub in Oxford and have never encountered such rude behaviour in my whole life. This pub is really best avoided if you want to have a good time.
Jenny 4 Aug 2006
Review this venue