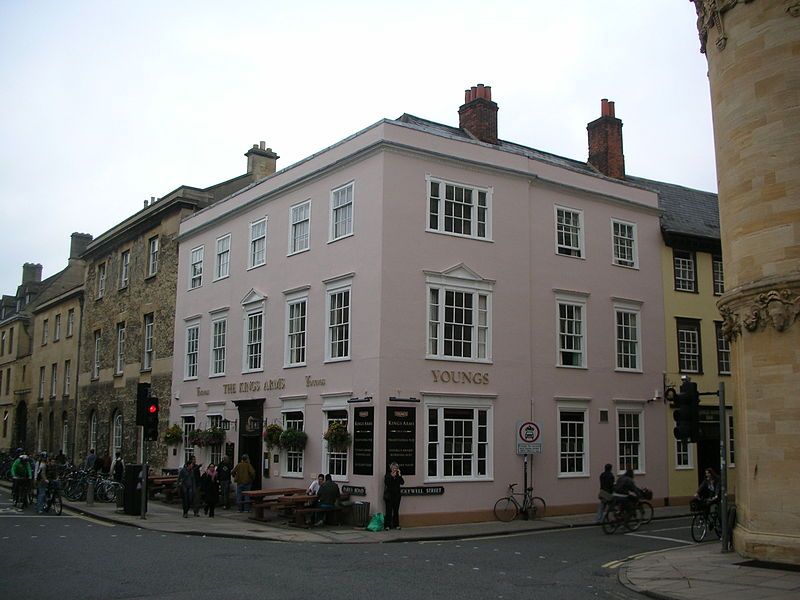 Beloved by students, many consider the KA an institution. It has the history, the brains, (if you believe their claim that they have the 'highest IQ per square foot anywhere in the world') and a warren-like quality which makes you feel like you are stepping back in time to the good ole days. After much searching for a table, we settled in the quieter back bar decorated in dark panelling and adorned with maps, newspaper clippings and other paraphernalia to keep one entertained while waiting for one's order. We didn't have to study the walls for long before the food arrived. The garlic ciabatta made for a puzzling side; undeniably homemade, we were presented with an entire untoasted ciabatta pasted in a garlicky herby mixture then covered in melted cheddar. Given the generous portion size in comparison with the price (£3.50) we thought it would make an acceptable and cheap meal for a hard-up student.

I opted for the homemade pie - a popular choice according to the menu - while my companion tested out the burger. The triple cooked chips were fluffy and crisp but sadly the vegetables (cauliflower, carrot and cabbage) were overcooked - ideal for the toothless but a little too soggy for my liking. The chicken, bacon and leek pie was delightful: the pastry was sturdy and flaky, the filling was well seasoned and suitably comforting, with plenty of chicken crammed in.

The burger certainly looked tempting but the results were mixed. My companion said that the patty was overdone but the addition of pickles and burger sauce compensated for this. We both agreed that the accompanying fries were the closest thing to McDonalds fries we've had from an outside source - this is a good thing in our books!

The KA is a characterful place to head to for pretty decent pub food, quick and friendly service and plenty of eavesdropping opportunities on largely intellectual conversation (depending on the time of day/alcohol consumed by the speaker).

The staff are very unfriendly. Food, ale selection and atmosphere are great, but the staff need to cheer up and learn about good customer service!
Rachel 12 Jan 2011
I have just returned from this pub. The staff are unfriendly. It is one of those places that come closing time everyone is pushed out into the street within 10 minutes. So if you're looking for somewhere quiet and friendly to relax, I don't recommend it and I won't be going there again.
Luke Titley 6 Mar 2010
Praise the Lord, they fixed the toilets!
Nose_Peg 9 Jul 2009
Really feel the KA has changed beyond all recognition in the last few years. What used to be a nice place to go for an atmospheric drink has now been completely overrun by huge mobs of undergrads/tourists. The pub has always been a favoured drinking spot for student and tourist alike, but for some reason the mentality of the place seems to have changed. Being the only pub in the immediate vicinity with 'late' opening - the KA is almost unbearable after 10 - impossible to even walk alongside the pub, nevermind getting in there to buy a drink. Could I suggest some better crowd control? The exterior of the KA often feels more like the worst of George St (which has admittedly improved measurably over the last few years).

When I was there four weeks ago a window was smashed - but no action taken to remove those responsible by the staff or any attempt to apologise to customers. We even had to remove the broken glass from the table ourselves. Is a shame that a nice pub (still evident at quieter times) has now become a no-go zone on the weekend. It seems that the lassiez -faire attitude of the staff (which helped make the pub a nice place to have a drink) is not really working at these insufferably busy times.

As would be expected from the KA, there is a good choice of (still rather pricey) beer and the food service is prompt and above pub-grub expectations. The provision of newspapers and ample seating are also most welcome and further highlight the multiple strenghts of the pub. Just a shame that the weekly descent into anarchy really seems to stretch the pub beyond breaking point
heronweaver 13 Oct 2008
This place is expensive. They charged me the same price for a pint of lager shandy as a pint of lager which I think is strange.
Tom 2 Jul 2008
Bought a pint for a friend and had a G&T myself- and the bill was £8!!!!

This place does lovely food but the price of drinks is absolutely disgraceful.