For information about and reviews of the current venue occupying the same site, see The Grapes 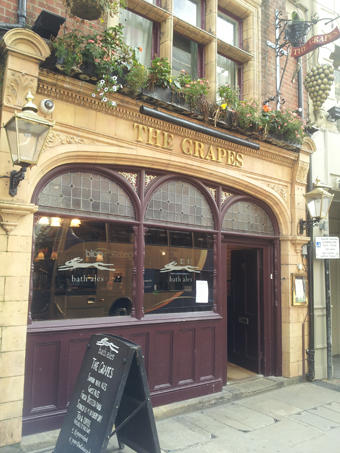 Let's face it, The Grapes was probably due a few quid spent on it. It was a bit grubby, with a fairly stubborn odour, and you could easily walk down George Street and miss the pub entirely. But what a lovely little place it was, slightly over-lit, with super friendly staff and a later licence than most, it was a rare old-fashioned gem. Its replacement, Beerd Oxford, rather ambitiously claims to be 'Oxford's first craft beer and pizza bar', somewhat overlooking the White Rabbit, Rusty Bike and Rickety Press. It's not just the menu that's had a revamp though, as during a few weeks of work they've turquoised the frontage and drastically updated the decór. The light fittings have been replaced with those low-hanging faux-vintage filament lightbulbs, they've installed the obligatory cool-new-venue-red-neon-sign (see Turtle Bay, Thaikhun, Pieminister, Be at One et al), and use chalk boards to display their many, many beers. The furniture is that fashionable sort of industrial chic of chunky, unvarnished reclaimed wood, and the loos are much improved. The absolute tragedy though are the walls. I really hope they've made some new edgily scruffier wood panelling to line the pub with, but I strongly suspect the original Victorian fittings have been brutally sanded down. It's almost uncomfortably sad.

That aside, Beerd was nicely buzzy for a Wednesday evening, with a quite refreshing mix of clientèle. There was a young family tucked in a corner sharing pizzas and chips, a couple of laptopped millennials consuming schooners and WiFi, a cackling duo getting their post-work happy hour tips on and a gent propping up the bar who might not yet have noticed the refurb. We had to lurk at the bar for a bit while a table became free, which gave us plenty of time to pick our beers. There are probably at least twenty on tap, and many more canned and bottled in the fridges behind. It's an impressive array. They offer drinks by the 1/3, half, 2/3 and full pint, but we were a little surprised to find that the £3.95 price tag on the wall for the Stout and Australian Pale Ale that we ordered were for 2/3s. That makes a pint a rather staggering £5.95. In Oxford! Granted we did accidentally order the most expensive ones, you'd get something else for more like £4. But seriously! £5.95? The stout was described by my colleague as a decently good stout, and my APA was rich and hoppy. The food menu offers a choice of six 11" pizzas (you can add other toppings for 80p-£1), and some bar snacks like popcorn, olives, fries, wings and fried pickles. Katy and I ordered the pizza with prosciutto, black olives and mushrooms, the one with aged angus brisket, chipotle sauce and pickles, and feeling greedy, we got some fries to share. While first intriguing, the brisket on the pizza was thought to be a slightly weird choice. It was really chewy and not the melt-in-your-mouth experience anticipated. There also wasn't that much of it. The chipotle sauce was tasty, but the big chunks of pickle didn't work. The bases were thin and crispy, the kind where the middle end can still stand up when you pick up a slice, so that was ideal. My more classic toppings all worked well together, as you might expect. Its ingredients seemed well sourced and cared for. It was a solid pizza. There were two oils brought out for dousing the pizzas, a chilli oil that had zero kick, which made it pointless, and a herby oil which was like pouring pesto all over your pizza. This pesto one completely divided the table as either horrible or amazing, and the bottles had vastly different pour rates, beware. The fries were delicious - like McDonalds, but crispier, in a good way. The presumably homemade garlic mayo was totally epic. I've never had such garlicy mayonnaise. You might need a mint.

Beerd are properly passionate about their beers, and they've really got a chance to capture an invested and growing market of ale and beer enthusiasts, especially in the city centre. A little look around town will show other places doing some of the same things, better, and there are cheaper pizzas within sight of stage doors, but overripe decór clichés aside, I'll probably be back, and it may well grow on me. Really unfortunate acronym though.

Intrigued to find they serve roasted peanut ice cream; delighted to discover it is totally delicious; creamy and, well, nutty. I will return specially for it. Three scoops of ice cream served as a bar snack is £3.95; without being asked the staff brought us two spoons. Our other scoops were ginger and salted caramel, less exciting but perfectly nice. They have Bath Ales and Fevertree tonic; the space is relatively small and the tables are usually crowded, but despite that it has a relaxed feel, somewhere between a pub and a bar, and you feel reasonably private. It's a great place for a quick pre-theatre drink.
Minnie the Muncher 28 Mar 2013

It was a great pub before Bath Ales took it over, but it is really excellent now. Hands down the best beer in Oxford, and the food is decent too.

B 23 Jan 2013
Used to assist in running this pub several years back. Good to see new managers are keeping up the tradition! Lovely place.
johnston 2 Mar 2008
As we run a pub ourselves we can appreciate how tough it can be, and we can only heap praise on The Grapes. It's a pub we now frequently use whenever we get a rare afternoon or evening off. I think it's the only pub in Oxford that we can say has consistently fantastic food! We've never had a bad meal. We've always been made to feel welcome either by the landlord or staff no matter how busy it gets - and it can get busy! Quality ales and beers are served, they have numerous certificates to prove it and a casque mark. So overall: well done guys, keep up the wonderful work!.
yid 3 Jan 2008
Had a fantastic lunch with my partner and some visitors to Oxford. Was still able to get food at around 4pm on a Sunday. Had the special of lamb and mint sausages in a giant Yorkshire pudding. Great portion size and value. The pub had a novel and unique decor and special praise must be given to all the staff, as everyone who served us was so polite and helpful. A big thanks to them - definitely one to return to.
25 Nov 2007
Another one of my favourite pubs in Oxford (along with the Eagle and Child) due to its warm atmosphere, friendly staff, and the greatest bangers and mash in Oxford I've tried.
Oxford Student 31 Mar 2007
What a fantastic pub, was made to feel so welcome by all the staff. Met a wonderful barmaid whose charm and style overwhelmed me, and I suggest that anyone who visits Oxford goes to the Grapes and experiences her unique yet facinating sytle of barmaiding! A warm and friendly atmosphere and one of the few traditional english pubs left in the UK!! 10 out of 10 !!!!!
Simon Frank 31 Jan 2007
Review this venue