Occupying a prime spot on Woodstock Road as it winds its way into leafy North Oxford, The Royal Oak is a lovingly restored 18th century inn, ahead of the game in providing the perfect setting for a truly memorable drinking and dining experience. Whether it’s a relaxed lunch, sumptuous Sunday roast, family dinner or tasty brunch you’re looking for, we offer fresh and flavoursome home-cooked food, a diverse and explorative drinks menu, and the warmest of welcomes. Housed in a Grade II listed building, The Royal Oak boasts original exposed beams and brickwork, traditional wood panelling, and plush furnishings, stylishly blending sumptuous period features with contemporary touches and creating many a cosy corner. As well as being dog-friendly and keeping a delightful open fire roaring during those chillier months, there’s an inviting beer garden – perfect for lazy afternoons, al-fresco dining or just a glass of something special on a sunny afternoon. 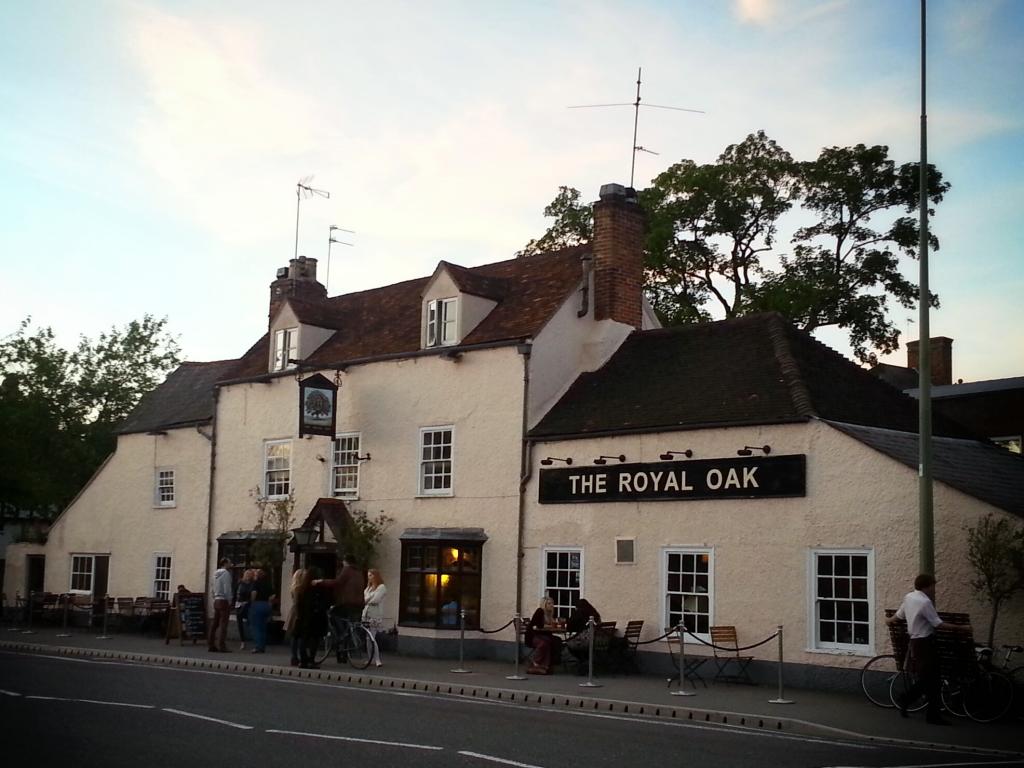 Good atmosphere, great layout, and good enough food (if hit-and-miss). Let down, however, by poor service. It's not unusual to be left waiting a long time for food, or to be told the item you want to be unavailable.

On Mother's Day the menu promised much, but the food was disappointing. No proper roast potatoes or crackling even though both were on the menu (when the kitchen runs out of things, it's best to let the customers know). We ate anyway because we were hungry. Though the room we were in was nearly empty, we were given the table near the kitchen so got a very strong smell of fried fish every time the door opened. Music and decor also need attention. This used to be such a good pub, but the food is now not appetising or cheap. Puddings small and unimpressive. With drinks, you're looking at around £20 per head for two courses served indifferently.

OxfordG 19 Mar 2012
Huge decline in the quality of their Sunday roasts. A very disappointing experience. Poor service also. After many a nice meal there, sad to say we will definitely NOT be returning.
jericho_prof 11 Dec 2011
I was very impressed with the Sunday roast I had here over the weekend; superbly cooked and seasoned chicken, two types of al dente veg, plentiful skin-on roasties and a large Yorkshire pudding (with lashings of delicious gravy - hurrah!) for just under £10. I had a nice seat in the garden, my G&T was expertly made by the charming bar man – who kindly informed me that Bombay Sapphire is the same price as Gordon's – and the chap dealing with food orders outside was very helpful and friendly. I thoroughly recommend.
Dr Mukti 9 May 2011
Formerly the best pub in town, and still great for a nice pint of ale, or just drinking. However, their food service is appalling. I've been three times recently for lunches due to it being close to work. Once they pulled as pints of beer before informing us that there was no food, despite there being menus all over the tables, and then looked put out when we didn't want to pay for them. The next time I was in, the food took about 45 minutes to arrive (admittedly they were busy) and was cold when it did. Today I went in and was unable to have my food of choice. Fair enough, however taking 40 minutes to deliver two burgers and some fishcakes when it wasn't too busy was unacceptable. Won't be going back, which is a shame as the set up is quite nice there and the beers are excellent. :(
JellyRoll 7 Feb 2011
Great pub, in my humble opinion the best in Oxford - a nice selection of beers, attractive decor and a nice atmosphere. Highly recommended.
JR 18 Mar 2010
The best pub in Oxford by far! The food is wonderful, the atmosphere is snug- the staff are warm, friendly, and welcoming. I go to the Royal Oak quite regularly with my boyfriend and the staff are always happy to see us, and already know what we will order! Love the décor and cosy atmosphere. Love the fairy lights. Love the Fruli (strawberry beer) on tap - wonderful. Love the interesting selection of snacks - chilli puffs are by far the best snack in the world! Seriously. Love the sharing platters, love the calamari, love the roast duck noodle salad, love the ravioli, love the mulled wine etc. etc.
The only thing I do not love is when I get there and someone is already sitting in MY seat. Grrrr.
Seriously go.

cherrydrop 21 Jan 2010
Went recently and had a disappointing lunch. Had a stingily portioned bangers and mash (despite paying extra for a coiled Cumberland sausage) and my friends' ploughmans were also very lack-lustre with thick, dull pork pie pastry and a tired-looking apple plonked on the side. It also took an eternity to arrive (30 mins) despite the pub not being that busy. Sat in garden at rear which apart from attracting its fair share of sun, also seemed to be a haven for a multitude of wasps which whilst you can't really blame the pub for, made the experience of eating and drinking far from relaxing. A couple of inexpensive wasp traps hanging from the greenery would probably work wonders.
Joe B 1 Aug 2009
A solid, inviting pub, with a good range of beers and some good, reasonably priced food. Bar service can be variable - from friendly to downright disinterested, but on the whole not bad. Definitely worth a visit if in the area.
Mike 24 Jan 2009
I went along last week and found the food to be fantastic. I have recently turned veggie and had the lentil burger. It was yummy - non meat eaters should give it a try.

The pub came under new management a few months ago and you can clearly see a difference. The staff were keen to serve and I gladly took up their offer of a double rather than a single. It wasn't a pushy sell, more a friendly gesture.

The friendly guy who served me had a fantastic, casual yet totally professional approach, a rare thing these days. His colleague on that shift had a perfect chemistry for involving people waiting for a drink.

My advice - go go go, give it a whirl and then come back here to write about what you thought.
21 May 2008
I'm surprised by the mixed reviews below. I've always found the Royal Oak to have great food and a nice selection of beers. I've visited with my parents and with a rather rowdy group of friends and have always found the staff welcoming and friendly. I agree it's not the cheapest pub in Oxford, but it's not overpriced.
S 16 Feb 2008
The service was unbelievably poor and the food not much better. The staff were uniformly surly (I don't believe I saw a single smile, but I did see eyes rolled to Heaven when a 'customer' had the cheek to approach the bar) and no, I am not the barman's 'pal', 'buddy', or 'mate'. The food was lukewarm and had to be returned; the replacement was still lukewarm (and the chips were either pappy or raw) but by then I'd given up caring. If you want to experience British attitudes to customer service this is the perfect place to start - at least you won't be surprised when you go elsewhere. All in all a grubby experience, much like the country as a whole. (And I'm English!)
Diss Cuss 25 Sep 2007
Re-visited after previous drunken visit to find The Royal Oak to be even more inviting than I first remembered it to be.

Seems to be another extension of the wine bar-esque chain that is currently The Jericho Tavern and the Cape of Good Hope. I happen to like them so found this one very agreeable, though I know others who will think it slightly pretentious and overly expensive. Never mind, there are plenty of more modest establishments elsewhere for these people to enjoy.

The lay-out of the pub is one of nooks and crannies and there are a total of 3 outdoor seating areas. There is a side patio that had a bbq on the go when we visited and a cosy rear garden with a covered porch (probably aimed at smokers).

There is a bar billiards table which is a rare sight. Most people won't be that gutted, but this is another Oxford pub with no fruit machine in. I know it doesn't fit the decor but to me a pub isn't a pub without a fruit machine!

Even so, the excellent Fruli beer on tap as well as the lethal Weston's cider make up for this in a small way.
Joe B 19 Jul 2007
I've only been in once and was totally smashed after an all day pub crawl round Jericho, but from what I can remember it was a really great pub. When I see Leffe beer on tap I usually go straight for it, but there was some guest cider on offer that was strong and cloudy so I plumped for that.
Really nice seating areas with modern furniture and I think there was a garden at the rear. Will go back when more sober to fully enjoy but highly recommended.
Joe B 14 Mar 2007
Review this venue