Old riverside pub in rural location, popular as a halt for walkers and people in boats and punts.

We pride ourselves on a perfect pint and we offer a range of real ales. We also have a great wine list and new gin menu. We believe the British pub has a fundamental role in its community to serve as a place for socialising, relaxing and enjoying quality products. A mix of customers are always welcome at the "Vicky arms", from families, tourists and locals to puntsman, ramblers and man's best friend. And at the Victoria you will always be guaranteed a perfect view, summer or winter. Our facilities include: free Wi-Fi, disabled access, high chairs and a large car park. Big garden rolling down to riverbank. Quizzes and occasional live music (including folk sessions). 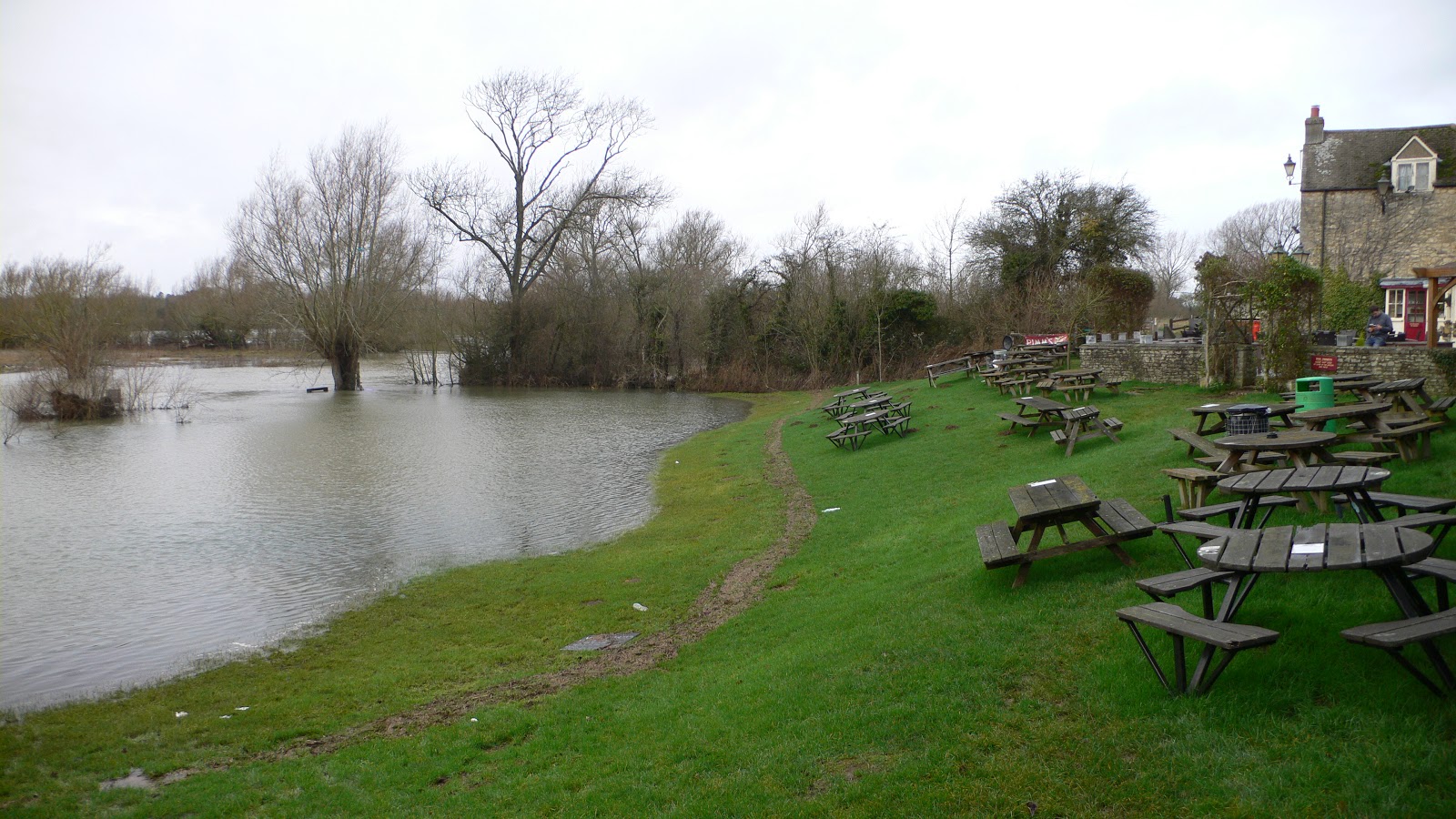 Visited the Vicky for the second time today, great food which we ordered from the specials board and fantastic recommendations by the duty manager, his knowledge of the food was very helpful on both visits. Also very friendly manner and interaction with our table and the table next to us, compliments to the chef. This place is on the up! Down side the garden and not being able to sit on the grass.

Oh and sorry to say this but music was very quiet in areas and would have preferred to hear it. People should try this place. :-)

Carli1982 11 Jul 2012
It is ok for a drink but not a meal because the food is well below standard, especially for the price. Despite complaints the management don't appear to be in a rush to fix this because the gorgeous riverside location brings enough custom. The long queues at the bar have put me off going again as well as the apathy of the management to customer feedback about the food.
Jocelyne 12 May 2011
I visited the Victoria Arms this week-end with friends. I was really hoping it would be a great pub but left feeling disappointed. The setting was beautiful - this could be a great pub - but the food we ordered was really quite bad, especially given their gastropub price tag. The chicken was described as 'creamy', but was dry and over-cooked, and the scampi and chips and vegetable lasagne ordered by the others lacking in flavour. The service was not unfriendly, but food for different people arrived at intervals. The bathroom facilities were disappointing - the ladies was a mess, with empty toilet rolls on the floor, no paper and clearly requiring inspection. Overall I think there's a need for further staff training and to either improve the quality of the food served or lower the prices.
Jules 1 May 2011
The location map which google gives from the Victoria Arm's postcode is totally inaccurate. It's actually on the other (south) side of the by-pass. The turning is just before Cumberlege Close and doesn't even appear on the Google map. But you can see it on the satellite picture.
Hope 3 Jan 2010
A couple of years ago, after a very pleasant evening meal there, I made the mistake of going for lunch on a Sunday. Disappointing. Avoid - or at least check what menu they are doing.

The rest of the week it is great - lovely setting, fire in winter, good beer, and unpretentious, honest food, delivered with a smile, quickly and for a fair price. All of this means I take my mother and my aunt there regularly. They can get in easily - no steps, and many of the meals are available in small portions that don't put them off - and my aunt can have well prepared liver and bacon, which she never gets in her home

And they do take reservations

JD 2 Jan 2010
I have lived for 12 years in Oxford and of course I know the Victoria Arms, since it is not far from our home and we often go there in the summer to enjoy a beer in the garden. For drinking and relaxing views of the river, it is a just perfect pub and I'll keep going there just for this. But I must say that the very first time I had food there will be the last. I ordered fish and chips, but ate only the chips. The fish was absolutely awful.
I did complain to the waitress, who didn't understand that in such instance, she should probably mention it to her manager to give at least the chance to address the issue. No mention was made and instead of having to seek the landlord myself, I just left with an empty stomach.
coco 24 Dec 2008
We had dinner at the Victoria Arms last night (not the first time) and it was excellent. We started with a couple of pints at an outdoor table, and on a fine summer evening it doesn't get much better than that.

But I'm not really much of a drinker, so I can comment on the food! The queue for ordering was a bit long, but the staff were amiable and the food was delicious. They were sadly out of the Victoria Pie, which looked great, but I had the spinach-marscapone lasagna and my husband had the beef lasagna and both were really good.

For pudding I had a blackberry-apple flapjack crumble, which was unique and scrumptious. It was served very hot with a side of whipped cream. My husband had a toffee pudding he liked very much, also served hot with whipped cream. Recommended!
Holly 9 Aug 2007
This very popular punt stop pub is a big draw with visitors and locals alike, and has the looks to prove why. Also, thank goodness, it's not been pined up in a characterless 'trendy bar' refurbishment, and still has the feel of 'a proper pub', plus an interesting range of real ales alongside other treats (quarter bottle of rosé cava, anyone?). The slightly eccentric, good-humoured staff add to the feel of this (though I see how the faint-hearted could mistakenly take thir dry humour the wrong way!). Ask to try an ale here and chances are you'll get a proper little pixie-sized-pint tasting glass to swill it out of. They know their stuff and are pleased to let you in on it.
Good for a sunny afternoon in the big riverside garden, or a rainy one huddling indoors on some comfy seating. Haven't tried the food though. If it's anything like the food at the landlord's former place it's probably not much to shout about, but then I don't generally go down the pub for food anyway!! Think they have a pub quiz too...
Liz Graham 10 Jul 2007
Are the last two reviews by friends or the same person??
Can't see where they're coming from to be honest..I have never noticed the attitude they refer to. In there most weekends, and yes it's busy, but food's good, service is good and the beer is always spot on. It's a shame that when some people have a gripe they have to hide behind annonymous e-mail reviews.
Deak 5 Jul 2007
After an exhausting bike ride from Wycombe to Oxford, which involved battling the most extreme elements, which would make even the most adventurous and experienced explorer struggle, the group were hoping for nothing more than a cold beer, good grub and welcoming staff. Unfortunately, what they got was quite different. The experience was nothing less than diabolical.

Earlier in the week, the pub had been warned that a large group would be visiting on Sunday 13th May as part of a bike ride in aid of charity. We asked if we could book and the person on the phone casually informed us that the pub did not take bookings and just to arrive on Sunday. When the group did arrive on Sunday, they were initially informed they could not eat as they had not booked! Grudgingly, the manager did eventually agree, after much pleading, to give the group menus but at this point everyone was too upset and fed up to eat and just wanted to go home.

The rudeness and the lack of help from the manager was what made the experience so terrible. Clearly, he thought it more important to use a large section of his pub to sell expensive art exhibits, than to make customers feel welcome. Since visiting the pub I have been informed that he is notorious within the area for his lack of empathy towards customers. It does make one wonder what he was thinking when he applied to run the pub!?!

I considered sending a complaint letter, but realised that it would fall on deaf ears. I have now decided to inform others considering visiting the pub of its unfriendly atmosphere and ethos and advising them to visit many of the other superb pubs in the Oxford area where you will have a much happier experience.

Fortunately, the bike ride was not all doom and gloom as the group earned over £1000 for the Macmillan nurses charity.
1 Jun 2007
The Victoria Arms could be so much better. The food is over priced and of poor quality. The Landlord is about as cheerful as a woman with severe PMT although his staff are lovely.

It's a nice local for us but I wish the pub grub was of much better quality for the price. I hope it never falls to the same fate as the reverbished Trout in Godstow, please just make better food and you would get more customers, especially in Winter!
bex 2 Apr 2007
I come here in average about once a summer for some lunch with friends and always have a good time. It gets really packed if the weather's good (there's not really not much point in coming if its not), due to a sun-trap patio with pub benches. Seats are at a premium, as is space in the already massive car park if you arrive late so get there in good time. Cannot remember much about pub interior as only ever nip in there to order drinks and food when sitting outside but think there is an open fire for winter. Only minor gripes are its very diffiuclt to get to on foot (best come by car or punt!) and I always think they could exploit the large grassy area between the patio and the river more - maybe put in some more seating?
Joe B 16 Mar 2007
Review this venue

We went to the Six Bells quiz night on Sunday and can say without hesitation it's the best quiz in Oxford. The quizmaster is knowledgable ...

Marsh Harrier, Marsh Road, OX4 - Sundays 8.30pm, £1 per personThe quiz has been going for many years and is set by rotating volunteers so ...

Just found out that they are taking nominations for teams to play and suggest their own local charity.All that and I could tell that there ...