A lovely neighbourhood pub in the heart of East Oxford. 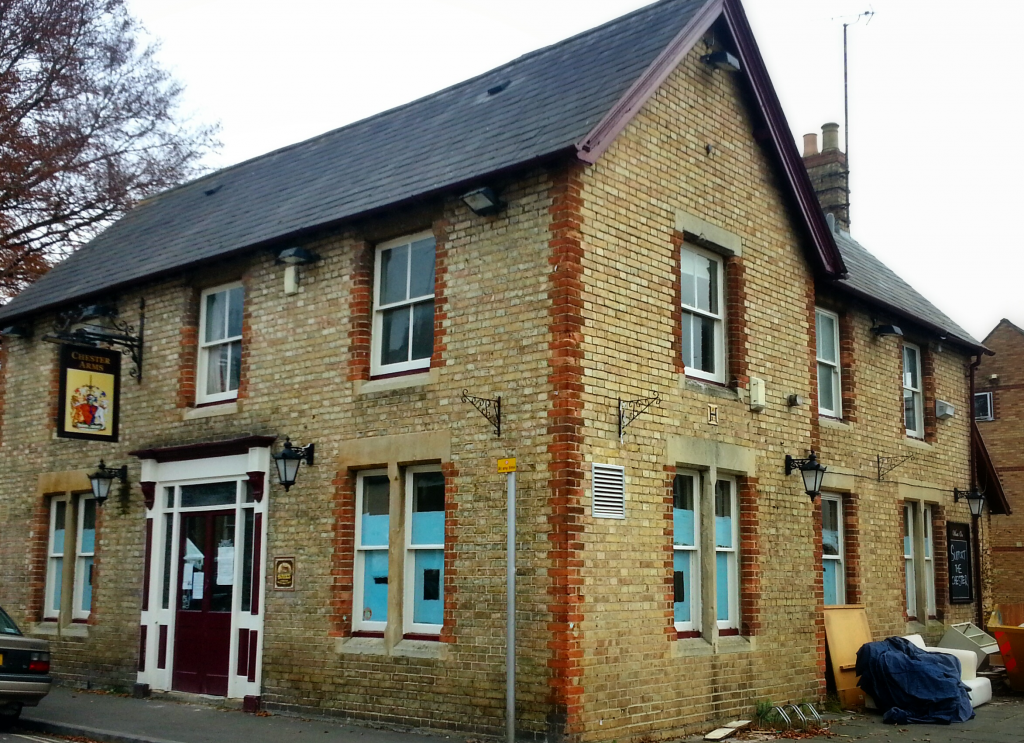 We were lured to the Chester Arms by two things: photos of the Steak Platter on Facebook, and by the fact that the chefs are the old crew from the Port Mahon whose food we liked a lot. It's great to see The Chester properly up and running again, looking swish but comfortable, a good pub to have as a local and a destination worth travelling to. Certainly it was packed for a Wednesday night, with every kind of party from quiet couples to a 12-some of all ages eating fish and chips.

Decor is nice. It feels very open and welcoming, with fancy lights over the tables. The new paintwork is smart, but it's not OTT. It's a sort of understated hipster vibe. Our waitress was helpful, friendly and competent, and seemed unsurprised we were after steak.

We started with Bobby and ginger beers, and starters of scallops (a special), and a veggie platter which seemed like a good way to try loads of things. Bobby is a local beer, brewed in the Cotswolds. The verdict was sweet, crisp, medium body and perfectly nice. The food was a little more variable - we hadn't realised how much of the veggie platter was battered, and it seemed a bit cruel to some of the poor veg to encase them in such a stifling casing. The broccoli suffered particularly. On the other hand, the salads on the veggie platter went down a treat. There was a tangy tomato, cucumber and olive, a wintry slaw, a spicy chickpea and spinach and a babaganoush with a hefty garlic kick that went with everything. The scallops came with black pudding and some delicious poached leeks, which were much nicer than their battered siblings on the platter.

Steak platters come in two sizes: 2/3 person and 3/4 person. In hindsight, we should probably have gone with the smaller one! But we were adventurous and greedy, and opted for the larger. We ordered it medium rare, but I'd say what we got was closer to blue - the outside was seared but this was about the extent of its cooking. This is probably the better way round, given how often places overcook steak, but as a very pregnant person I did feel a bit guilty about it (though not enough to send any of it back).

Steak comes with copious quantities of good homemade chips, broccoli, a green salad (which was a little over-onioned for me), cabbage and bacon, and some excellent homemade bearnaise sauce. The chips didn't appear to be seasoned, which obviously isn't much of a problem but did surprise me. The waitress was happy to box our leftovers for us - I gather it's totally standard for people to be defeated but loath to give up! We declined dessert.

The bill (£28 per head, including a couple of drinks each) came with a tiny feedback form, small enough that I guess a lot of people probably do fill it in, and I think the staff genuinely do read and care about the comments. And that's the great thing - this is a pub that's run by a small and dedicated team who really want to make it a success and are well on the way there. I don't think they've quite achieved perfection - compared with their previous incarnation at the Port Mahon, the food is trying a bit harder, and not to its own benefit. (At least that's what I think the tempura batter is all about.)

The Chester has a lot of benefits - it's got a great catchment area, with no close rivals aiming for exactly the same market, a lovely garden, a feeling of being just tucked away enough, friendly staff - a cosy hideaway. It's well worth going to now - the misses are not disastrous and the hits are delicious. And if it just chills out a bit it'll be perfect.

Recently reopened, well worth a visit.

Sadly this pub has been closed since last year. It's not been demolished or turned into much-needed luxury flats for the insanely wealthy yet, so perhaps it'll open again at some point. Avoid for now.

The Chester Arms has a new and better menu, really really good Deuchars IPA, a lovely garden, its family friendly.

R9 5 Feb 2012
Lovely, genuine, honest, local. Great space for the kids and really really excellent home cooked locally sourced food. Probably the best burger in the world! Seriously good. It's a real find. We will definitely be regulars.
Accident man 23 Jan 2012
Very good locals' pub in an off-the-beaten-track location. Almost certainly the largest collection of board games in any Oxford pub (and most seem to still have all their pieces intact!). I have done the quiz recently and thought it was well run and was glad it didn't take itself too seriously. Given the slight seating restrictions you're only ever going to get 10 teams or so maximum but it makes for a very pleasant Sunday evening.

I do however agree with the previous reviewer's comments regarding the slightly farcical jackpot end game which on the occassion of my last visit saw a team emerge as winners from 2 games based purely on luck (a Play Your Cards Right mock-up and pontoon) and got a chance to win the jackpot of about £170 only for them to draw "a round of applause" from the pub instead. I would be miffed if that was me, but if it generally means the pub makes a bit of money and continues to thrive then that is definitely a good thing.