Amusingly-nomenclatured pub formerly known as the Slug & Lettuce (and prior to that, Yates' Wine Lodge). Lift & baby-changing facilities. The eye-catching building next door but one to these premises is Oxford University’s history faculty. It was originally the city’s High School for Boys, which opened in 1881. The comic actor Ronnie Barker was a former pupil and later one of the Two Ronnies. Probably their best-known sketch was ‘Four Candles’. Barker walks into a hardware store and asks for and gets ‘four candles’. However, he really wanted fork handles – ‘andles for forks’. 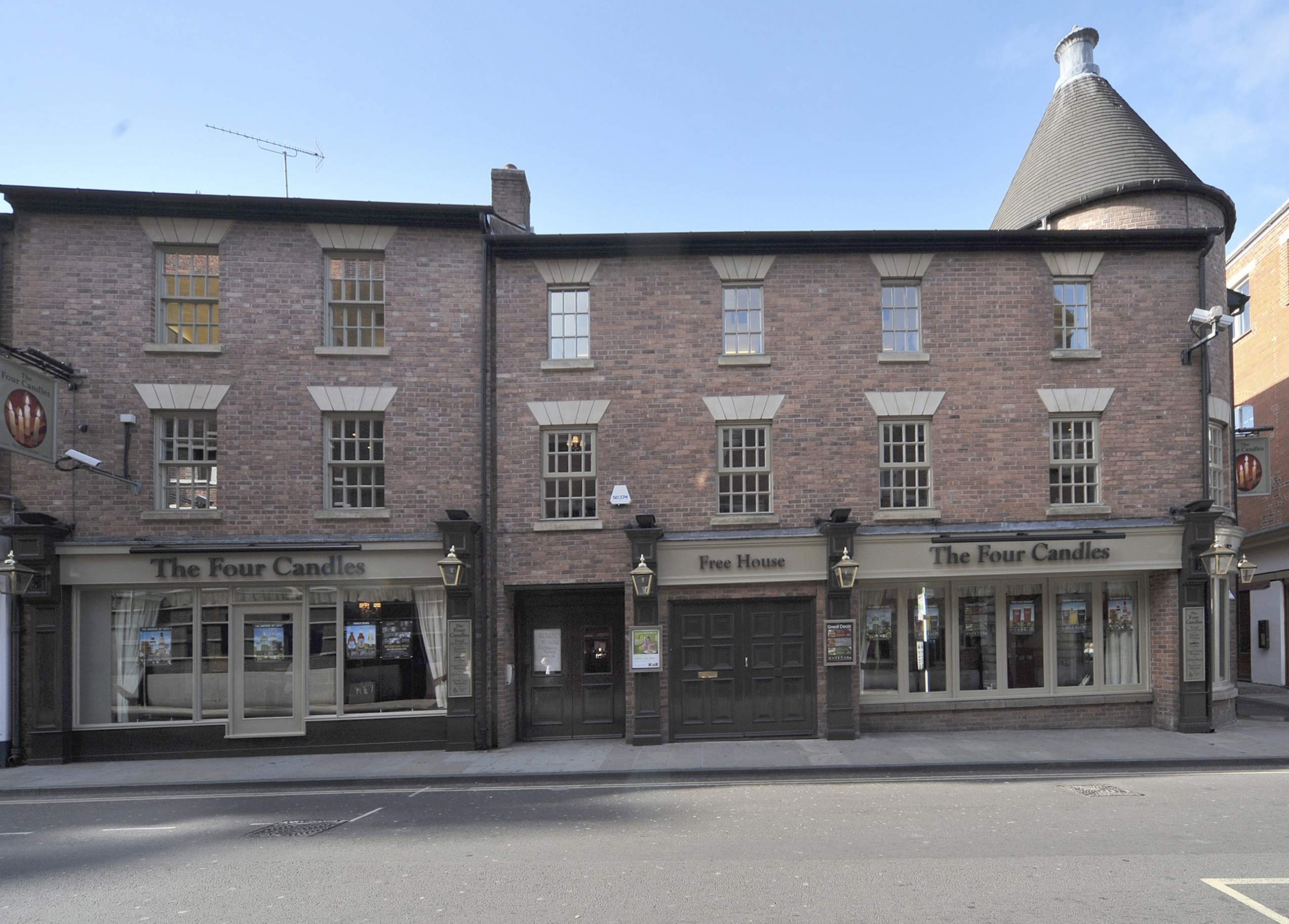 Went to Four Candles on Thursday 12th of July for pre-theatre supper, it was quite busy but the staff were great, got served very quickly, ordered four meals which came so fast we did not have time to drink half a pint. Food is what you would expect from a fast food pub, ok and very cheap, table was cleared and we had time for a wine as well. Well done staff.

I took my family here this evening and ordered dinner and drinks. After dinner, the children wanted pudding, so at 7.30pm, I queued to order brownies and ice cream. The order on the receipt was 7.45pm. At 8.10pm I went back to the bar to ask where their ice cream was, and was told 'your children are not allowed in here past 8pm', at which I explained that we had been waiting for their ice cream for 25 minutes.

I was dealing with the guy behind the bar and he was great. He was running between the kitchen and me trying to sort out the problem and get my kids their ice cream. All I wanted was to take them home and get them to bed. While I was waiting at the bar (another 15 minutes) for the guy to come back from the kitchen, I was approached by a woman who told me my kids were not allowed in there past 8pm. I replied telling her that I knew this and explained the situation. Somehow the situation ended with the woman - the manager - telling me that I was no longer to be served at the bar.

Credit to the other staff for trying to sort things out, but the bottom line is that this is unacceptable. The food is okay, the price is cheap, but this kind of mistake is not worth it.

OWL123 4 Dec 2009
The Slug and Lettuce chain has gone bankrupt so this bar has closed. Judging by the fate of a couple of other George Street venues I would suggest it will become a restaurant rather than another bar. Hopefully it will be an improvement!
Joe B 7 Apr 2008
"I'm sorry mate, you have to have a collar"

Who are they kidding? I was better dressed than the bouncer. To make matters worse I was wearing roughly the same ensemble during my previous visit when it didn't seem to be a problem.

Whinge aside, it's a damn site nicer than Yates. But with all these things, you can paint it, rename it and rebrand it but you can you really ever change the clientelle?
Nixx 15 Aug 2007
Oh happy days! Yates' is no longer! It's now a slightly less awful Slug and Lettuce chain pub. There is now more emphasis on eating and sitting down rather than fighting and aftershock slammers as it was previously.

Advertised Fruli beer on menu but not on offer at bar which was annoying and service a little slow but much more convivial than before. Still not worth travelling into town for or coming here just for the food.
Joe B 27 May 2007
I was forced into going here recently and was delighted to find that it no longer is a Yates's and has now been swallowed up by the marginally better pub chain juggernaut that is the Slug & Lettuce.
The main changes seem to include a reduced chav quota and a more 'pubby' feel. There is plenty of seating with a definite emphasis on dining, especially upstairs.
Wasn't particularly impressed to find that the fantastic Fruli beer that was advertised on the table menus was off but the overall selection of beers and spirits was very good. The music wasn't too loud either which was encouraging (which puts it one step ahead of Bar Copa which I went in straight afterwards).
Overall, still only good-average, but better than before.
Joe B 29 Apr 2007
Review this venue