Really lovely pub situated near the Cowley Road, home of students and locals alike. Hosts a great pub quiz on a Thurday at 8.30pm with £1 entry. Also host Feast without the Beast on Sundays - a fully vegan Sunday roast! 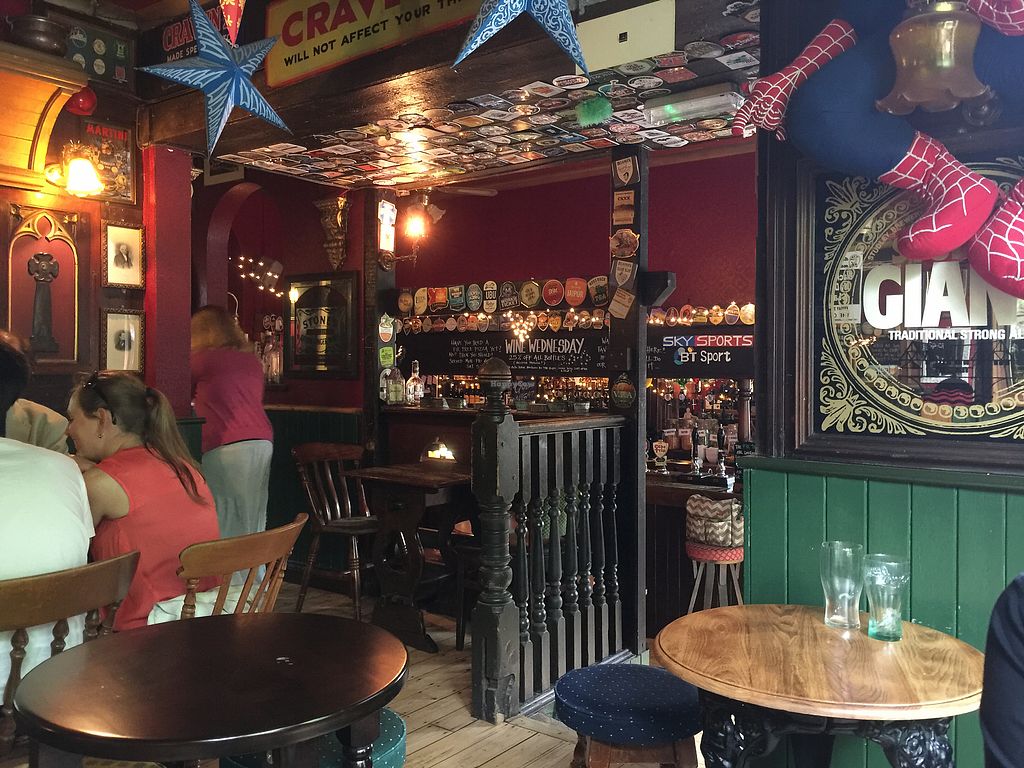 The Fir Tree has served pizzas from Monday to Saturday for some time now, but it has recently changed direction when it comes to Sunday lunches. It is now the venue for "Feast Without The Beast" - an entirely vegan Sunday lunch menu - and I have to say it is well worthy of the word "feast". Three of us tried it out yesterday and were extremely impressed. I had sausage and bean pie (my husband had the same) and our son went for the nut roast. All were served with roast potatoes, parsnips, broccoli, carrots, peas, Yorkshire pudding and gravy.

The pies were heavenly; chunks of vegan sausage and beans that had been casseroled then encased in a homemade pastry that tasted like a hybrid between shortcrust and hot-water crust. My son said the nut roast was delicious but I have to take his word for it as he didn't offer to let me try any of it. Vegetables were cooked to perfection (no sign of school dinner sogginess to be seen) and the Yorkshire puddings were a revelation. I've seen recipes for vegan Yorkshire puddings online and imagined them to be terribly stodgy, but they were well-risen, crisp on the outside with soft base, just how a Yorkshire pudding should be. The gravy was light and flavoursome without a hint of gravy browning.The third option on the menu was moussaka, which I will certainly try on another occasion. Portions were generous without being over-facing. We were left with just enough room for dessert.

I had seen the diners next to me sampling the Tiramisu and hoped to do the same, but sadly they had run out. We all tried something (I think it was called snix but cannot be sure), which was a coconut shortbread base, topped with caramel and a layer of chocolate and served with vanilla ice cream. A chocolate mint version was also on offer and my son opted for that. It was a huge success - I have never tasted vegan desserts as good as they were. Do visit the Facebook page for more information about it and to see some photos of the food on offer.

My only criticism is that The Fir Tree prides itself on showing sports fixtures on its many TVs. There was one in the front room (where we were eating) and kick off began before we finished our meal. A hoard of football fans descended whilst we were still eating. Some found seats but the rest were standing, jostling for position around where we were sat. They were also very loud and demanded that the bar staff turned the volume of the TV up. We finished our desserts as quickly as possible and left - although our original plan had been to stay for coffee. That could easily be remedied by not switching the TVs on in the rooms where people were eating - there are three rooms to choose from, plus a small beer garden so I'm sure they could arrange things so that neither diners not footie fans have to be compromised.

Dogs are not allowed after 8pm, so don't turn up with hound in tow in the evening.

NAllen 21 Feb 2013
The quiz here was lively and great fun. Five rounds, each with their own prize, meant that glory could be claimed by more than one team over the course of the evening and you didn’t have to wait till midnight for some answers to be read. The prizes (ranging from a £10 bar voucher to a bag of nuts) were allotted to winners through a roulette style choosing of brown envelopes picked ceremoniously by a member of the winning team.

The questions were about right (for my taste): only a smatter of sporting personalities and a good sweep through TV, history, literature and general randomness. There was also an association round, where each answer is connected in some way to a theme, in our case ‘gardens’, and extra points are awarded for recognition of the theme, as well as a trick question about the number of hands belonging to Big Ben (who, being a bell and not a clock, has none.) Very satisfying if your team got it!

General enthusiasm and a friendly bar staff made for an excellent evening. Get there early for a seat and order a pizza before 9pm. They smelled yummy.

Emma Pearson 5 Aug 2010
At last the Sunday roast is back! I have spent the last few months trying to find a Sunday lunch in Oxford to match that of the value and quality of the roast served at The Fir Tree but to no avail. Two meat choices and a vegetarian option, enough vegetables to get your 5 a day in, not an Aunt Bessie's in sight - it's all homemade, and you won't go away hungry. This is definitely my number 1 Sunday roast in Oxford, but if you decide to give it a try don't sit at the window table because it's mine!
Deirdre Rasheed 7 Oct 2008
I paid my first visit to The Fir Tree yesterday afternoon whilst trying to find shelter from the rain. I was greeted with a very warm welcome from one of the landlords; this may have been because I was the only person in the pub at the time, but as the bar quickly filled up it became apparent that all receive the same high level of customer service that I had experienced. I sampled a pint or two of a very well kept Rev. James and snacked on the superior and locally made Jonathan Crisps. Food is not currently being served as the kitchen is out of action due to the development of an outside patio area which will be a welcome addition, but it is a shame that Sunday lunches are not being served as I have heard that it was one of the best in Oxford.

A nice touch is the chalk board in the ladies toilet which allows customers to give feedback on the pub, giving it a quick scan it would seem that the two 'young' male landlords are a big pull for this establishment. So girls, if you are looking for a pub which provides a welcoming atmosphere, serves good beer and snacks, and provides a bit of eye candy, then The Fir Tree is definitely the pub for you. I shall certainly be making it my local.
Deirdre Rasheed 18 Jun 2008
Excellent pub. Much improved. We ate there on a Friday night and the food was fantastic, very good value, well presented and very tasty for pub grub.. The food and atmosphere here sets the standard very high for other places in Oxford, and the Fir Tree is definitely becoming our firm favourite for drinks and for a pub meal. The staff here are friendly and the drinks are reasonably priced too. It's a great place to go for a relaxed drink even when you don't want a meal. The glasses of nuts/mini eggs/sweets are a really good addition as well...much more appealing than the usual bag of crisps etc.
Jane 21 Feb 2008
Great choice of beer, good red wine friendly staff and amazingly good value food. Easy on the ear juke box. What a great place to unwind. Good mix of customers - locals, students and tourists.
Baz 8 Feb 2008
This pub has it all - friendly bar staff, good selection of ales, and now home cooked food. The boon is that it opens late on Friday and Saturday. Great atmosphere and the best roast in oxford..
mo 23 Jan 2008
Forget older reviews below, since the new management have scrubbed the place clean, started selling good beers, crisps & peanuts etc, (with food starting soon) this pub has become a real friendly local. Good atmosphere - whether it is quiet or busy - and good music. Choice of areas to sit to match your mood from a) at the bar. b) up the steps to the bay windowed room. c) the back room snug. Recommended.
Ric 10 Dec 2007
I had a great time at this pub last weekend.
I had not been before, but had heard terrible rumours....it seems that under the new management vast improvements have been made, and now...no dogs allowed thankfully!
It's certainly the only pub that I would like to frequent in Oxford....a new favourite.
Quaint and funky, with a fabulous atmosphere, and yes "an amazing jukebox".
People behind the bar were very easy on the eye too ;o)
BestBibby 14 Aug 2007
I really like this pub, it's got a nice atmosphere, friendly bar staff, quality juke box and it's open till 2am at weekends. Result.
Matt F 9 Jul 2007
Went to the Fir Tree last night to find it is now under new management - two young guys who are really committed. The mangy dogs have gone and the place has had a good clean, although none of the old character has gone. I found it really friendly, laid back and full of charm. Plus it has the best juke box in Oxford!
Jane 4 Jul 2007
My favourite pub in Oxford at the mo, and believe me, I've been to nearly all of them in the last year! The atmosphere is second-to-none in here, especially on a cold winter's night when it's buzzing with locals and students. seating is limited but if you can get a table in one of the cosy, warm seating areas, you will have a great night. Good juke box, fruit machine and some limited roadside seating at the front. The bar area is small though, and watch out not tread on a pub dog or 2! The decor is from a chain-pub tat warehouse but this only adds to atmosphere.
Joe B 14 Mar 2007
Review this venue