These guys began as a street food truck in Brixton, and are now expanding into permanent premises around the UK. They stick to one thing, so expect a menu of pizza! They offer a gluten free base, but can’t guarantee a 100% flour-free environment, though their gluten free base does not contain any gluten. 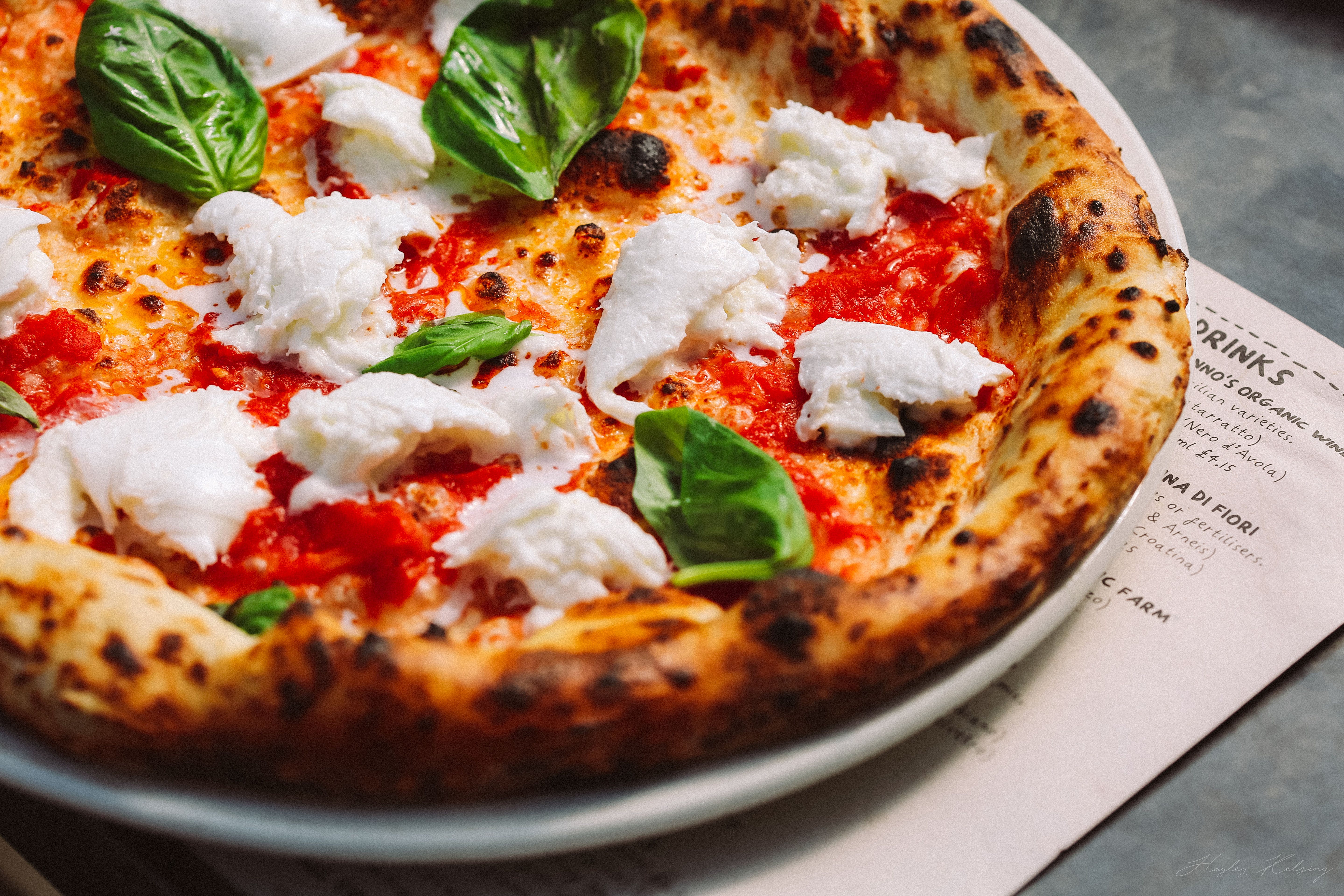 Ahead of an explosion of new restaurants when the Westgate opens its doors, two cracking new ones have appeared at opposite ends of . One of these, Franco Manca, is the new pizza kid in town, which has grown healthily across from its beginnings in Brixton Market, and emerges into a contested district - there are eight other dedicated Italian eateries within 100m of alone. But these guys focus their craft on the round, blank canvas of the pizza, and the sheer quality of what they do is enough to mop up my cynicism like a warm cornicione.

We arrived at a busy pizzeria on its opening weekend, all thrumming music, smiling staff and appetising scents. Franco Manca don't take bookings, so you may find a queue on arrival. There's a touch of funk to the décor - bare boards, bulbs in pendant holders brightening the tables, exposed silver ceiling thingies, and a nice hand-drawn aesthetic that continues across menus, drinks labels and signage. Our starters were an indulgent Burrata Pugliese (bulging mozzarella filled with cream) and garlic bread, appearing here topped with tomato and cheese like a pre-pizza pizza. It bade well for what was to come. Though admiring the starkness of its label, I'd've liked more character or richness from my craft lager to balance it out. An organic lemonade was delicious, fizz-free and as if someone's nonna (grandma) had made it hours before. To the 'za: as the massive, tiled wood-burning oven takes the centre of Franco Manca's floor space, the menu makes clear that its makers are all about that base. These pizzas are built on slow-rising sourdough bases: soft inside, crisp and darkened outside. I was won over by this cooking, as it meant the base was thin, had the right balance of textures, and that the fatter crusts were to each slice a doughy crescendo rather than a crispy, bin-destined coda. They're open about regrettably offering no gluten-free options, and not all of my party were wowed, as one was distracted by a note of bicarb. But we agreed on the excellence of the meat. From the specials board, mine was topped with hunks of Gloucester Old Spot sausage, fresh and peppery; ham from the same source was luscious; chunks of chorizo on another were generously sized and packed a punch. The quality of meat is not something we want to be skimped on. Piennolo tomatoes (great choice) lent an arresting sweetness, and aubergines a bit more heft. This pizza also passed the next-day test: having been slightly bigger than my plate, mine had to be boxed up by a happy staff member. Out of the fridge, it was still a marvel, and great value: the menu's most expensive pizza is £8.25, though theoretically you can pile on toppings to your heart's content.

The desserts were not something I expected much from, but both tiramisu and chocolate hazelnut were pleasingly unsugary - the cocoa's richness came to the fore without being masked by sweetness. Respectively, and hazelnut were the strong, secondary flavours. It's hard to review a restaurant experience on the strength of an opening event, when smiling waiters, the occasional freebie (and that theatrical tip-tray-dropping routine) are all there to impress (and induce bonhomie or tinnitus). But when Franco Manca do one thing, and get all aspects of it so right, it must be given a recommendation. We didn't unanimously think it toppled the White Rabbit, but at this value, it's absolutely worth a try. Or several.