BYO for diners only, firm favourite for student crew-dates, but with better food than other such venues! Available for takeaway through Deliveroo. 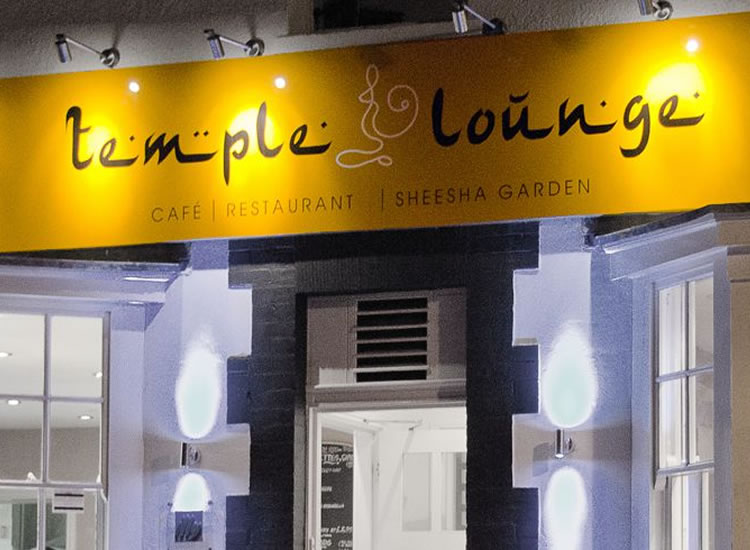 Wow! Went to Temple Lounge for the first time, did not even know it was there and it was so busy! Amazing arabic and indian food with a sheesha to digest everything. What a lovely place! Will be going back!
jaylo 12 Jul 2011
We thought we would go and experience what everyone is going on about, and I cannot pick fault. The service was top marks, the atmosphere was top marks, and well the food- I can honestly say I am a picky person, and I could not pick fault with this place. It is a very classy establishment. I  enjoyed the food and portion size- there is enough to go round, you will not come out of there feeling hungry. After we had eaten we went to the shisha lounge and that was really nice.
sara 28 Aug 2010
As a resident nearby, finally decided to visit Temple Lounge and see what all the hype was about. The establishment certainly lived up to it's reputation which is certainly a high one considering Temple Lounge has not been around for long. The main course of Arabic Mixed Grill was fantastic, extremely tasty and fresh meat with lots of rice. Noticed a very busy Sheesha garden which smelt devine from the flavoured Sheesha. Staff were very friendly and helpful, certainly be visiting again.
David 22 Aug 2010
We went their last night and we were not impressed. The food was poor and to top it off the service was poor! The starters arrived on time and were okay, but then it took the waiters a good half an hour to realise we had eaten and our table needing clearing ready for mains. The mains arrived after a very long time and when they came the food was bland.

Between us we tried both Lebanese and Indian. The only dish we thought was nice was the biryani. After we had finished again we sat for very long time for the table to be cleared. In fact this time round we had had enough of waiting: we had to call the waiter over and ask him to clear the table for us and provide us with a dessert menu.

When the dessert menu came they only had baklava and ice cream in stock. All the other desserts which we wanted weren't available and we were told to come back tomorrow for them! A few of us ended up having ice cream and baklava, which was ok.

The restaurant was empty but the shisha section looked busy, so maybe if you want a shisha it's the place to go, but not for a nice meal out!

Hi 22 Jul 2010
We visited the Temple Lounge last night. The restaurant was very busy, which I guess is to be expected as it's such a lovely place. The food was was amazing - been in Oxford for 18 years and no one can do food like Temple Lounge. The quality of the food was very good. The whole night was great and will be my regular in Oxford from now.

As I am a great sheesha fan, I have never tasted this great sheesha: you can tell the flavour was authentic and was a very smooth smoke. This is a great venture and I hope it does very well. Got to say price is very cheap compared to other places. Thank you for such a lovely evening.
Tom Davis 9 Jun 2010
My boyfriend and I decided to try the Temple Lounge last night on a word of mouth recommendation and we were seriously impressed. We stuck with the lebanese menu and shared one large main course and three starters. The hoummus was fantastic, and a huge portion for 2 people. The okra was delicious, and the falafels were gorgeous. We had the arabic mixed grill, which had lovely marinated grilled chicken, really tender lamb, and a long lamb kebab - it was really super. It comes with Lebanese rice too, which was fab. They're not stingy with flatbread either, unlike some other places.

The portion sizes are enormous - we are both normally v. greedy eaters and we were beaten before we could clear our plates. On top of all that, it was really cheap - with a lemonade, coffee, and 1 dessert, the bill came to £26 for the two of us. A query on our bill was sorted out immediately by a lovely waitress who was very apolgogetic. We brought our own drinks, as the Temple Lounge is BYO.

We eat Lebanese food quite regularly in Oxford, and the food at Temple Lounge is easily as good as, if not better, than some of the well-known places around the city. We will definitely be going back.
Sarah 14 May 2010
Tasty food, good atmosphere, excellent service.

We visited the Temple Lounge last night. The restaurant was very quiet, which I guess is to be expected as it's a new venture. Good news for us were that there were lots of very attentive staff. I would also second the fact that it smells gorgeous!

Two starters - one lot of sausages (as below) and one mixed meze. Sausages were yum. Mixed meze okay - one portion hummous, one portion moutabal, three mini vine-leaves and some salad. Could have been more varied, and it was disappointing our waitress didn't know what was on the plate, but good all the same (especially the flat bread).

Three main courses - one meat, one fish, one veggie. The meat and fish looked and reportedly tasted very good - watch out for the chillis though. I was slightly disappointed that my veggie main course was the same size as the side-order my dining partner ordered, and came without any of the accompaniments of the meat/fish dishes. Unexpected poor form from a Lebanese restaurant really. Rice was a real highlight for me - delicious.

So, my veggie main was a bit of a disappointment (but only in comparison to the huge and adorned meat dishes) but our overall dining experience was very positive. Prices not cheap but reasonable, especially as it's byob. Would happily go back.
CornerShop 14 Apr 2010
We wandered in to see the Temple's new look the other night. The deli counter is populated with very beautiful cakes. After a brief look at the menu we decided to stay for dinner. It's very swish, and more restauranty as you go further back. The sheesha smells very fruity in wafts as the doors into the garden are opened.

We ordered three starters between two - Moutabal, which is a bit like hummus but made with smoky aubergine, Bammieh B'Zeit (okra in tomato sauce) and Sujuq which are Morocan sausages in sauce. They were plenty for two hungry people and were less expensive than most tapas style dishes for larger portions. The okra were possibly the nicest thing I've ever eaten. They were not slimy, but perfectly cooked, and the sauce was spicy and more-ish.

We stuck with Lebanese for the main courses (though there are just as many Indian options should you wish). I explained I needed dishes without wheat, and was directed to several options. They were really prompt and helpful with this. I went for Sheesh Taouk (chicken kebab) while my companion had Lahem Mishwi, basically the same sort of thing but lamb. The meat was beautiful - delicious, tender, big chunks.

The request for no wheat had not made it through to the kitchen, so my salad came on a lovely raft of flatbread, and we'd both gone for Lebanese rice, which is actually a mix of rice and spaghetti. I should obviously have asked more questions and done more checking. We gave the place 10 out of 10 for food and 0 for joined-up thinking.

We would go back, if only for more okra!
Hobgoblin 6 Apr 2010
Review this venue