Winner of the Platinum independent pizza award 2016. Offers gluten-free pizza bases, and gluten-free pasta on request. A cosy setting, with a bustling feel. Very handy for the Phoenix! 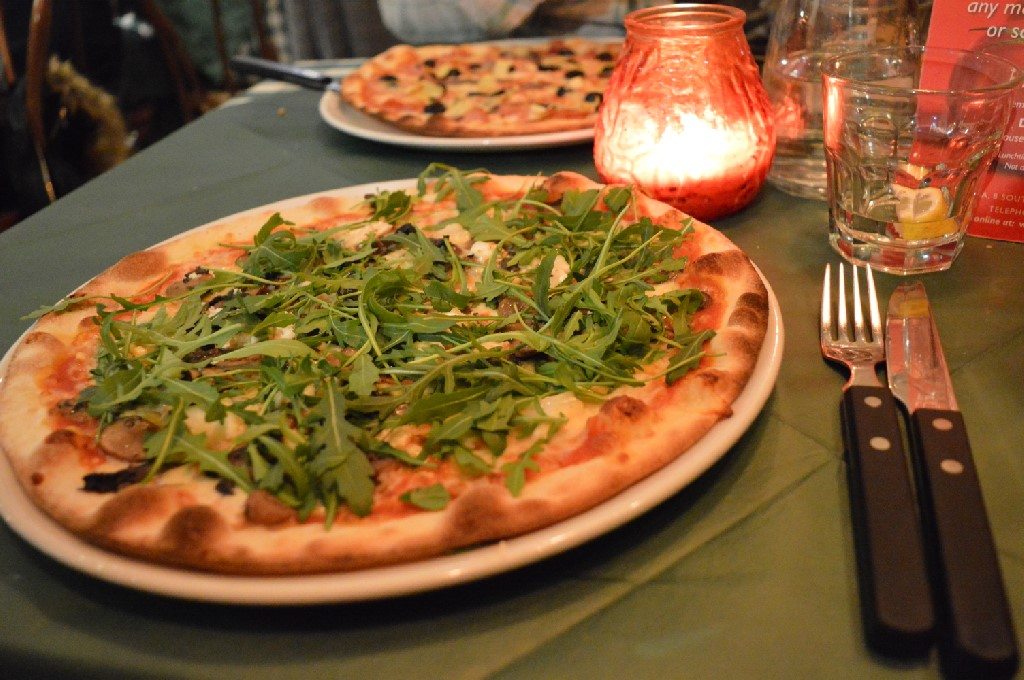 I can’t believe that living in Jericho, I had never been to Mamma Mia Pizzeria before last week. It was honestly the best pizza I’ve had in Oxford and it’s right on my doorstep! Then again, it’s easy to miss, tucked away, with its modest exterior, on Walton Street.

Once you get inside, however, the restaurant is pretty spacious, extending quite far back from the road. The décor is delightfully tacky, with cheerful 'Italian' pictures adorning the walls, an Italian flag colour scheme and corks on display in the window.

The wait staff were very polite. We were the last people in the restaurant on a quiet Tuesday night, and they did not even let on that would rather we left so that they could get off shift. Our waiter was attentive and the food and drinks arrived quickly.

To drink, we ordered a bottle of the Gavi. It’s their priciest white, but splashing out won’t actually cause you too many waves as it's only £26 a bottle. I already knew that I love the taste of this delicious Italian floral wine, and I wasn’t disappointed. I suspect that their other wines are just as good and will set you back even less!

For a starter we shared the calamari, which was underwhelming. It lacked flavour and the texture of the batter was rather woolly, but it did the job of tiding us over until the mains arrived. One of my fellow diners had ordered the lasagne for her main, which she described as tasty but far too cheesy. Being the self-proclaimed 'average-to-enthusiastic cheese consumer' that she is, I think that I can safely say that if the lasagne was too cheesy for her, it is probably too cheesy for most.

I, on the other hand, ordered the Pizza Al Funghi, which, in Mamma Mia's, includes crumbled goats cheese and rocket as well as mushrooms sautéed in tarragon. It's as if they knew to put all of my favourite foods together; it was absolutely delicious. The pizza base was thin and just the right amount of crispy, the rocket and mushrooms were really fresh and even the chilli oil seemed superior to other restaurants'. My other eating companion was similarly blown away by her gluten-free Americana. Accustomed to having to choose from a limited selection of gluten-free options, the range of options at Mamma Mia's left her spoilt for choice and the gluten-free pizza base was a very high quality (maybe even slightly tastier than the gluten-filled base!). The pizzas are all around a tenner each; a bit pricier than other pizzerias perhaps (although maybe not in Jericho), but it's worth the money.

From this experience I would definitely say that Mamma Mia's should stick to their strength - making incredible pizzas - rather than trying to branch out too much. Having said that, we were all eyeing up the specials, which on that day included some intriguing-looking non-pizza dishes. I would happily go back to be proven wrong about their other options, or just to eat several more pizzas.

Daily Info Staff January 20, 2011
The management at Mamma Mia is pleased to present this review, which was written by "mystery diners" who visited the restaurant anonymously. The management of Mamma Mia had no control over the content of this review.

Overall our visit to Mamma Mia in Jericho, Oxford was very enjoyable. The food was prepared from fresh ingredients to a high standard. The staff were attentive in that the manager greeted us quickly even though there was a large group in front, the staff were attentive throughout our visit, and a member of staff held the door open for us when we left. The restaurant was very busy when we visited and therefore was very noisy, and it was hard for us to hear each other speak, and so perhaps tables could be placed further apart. In terms of improvements which could be made I would suggest that the temperature of the lasagne should be the same as the surrounding sauce and that the cheesecake consistency could be a little more firm.

Excellent all round. Large, generously topped delicious pizzas and very good discrete but friendly service. Best pizzeria I've been to in Oxford.
Pizzaeater73 8 Nov 2011
Decided on Mamma Mia's for a quick dinner before going to a gig at Jericho Tavern. Both my friend and I felt it was a good choice. My Genovese pasta was delish and she enjoyed her pizza. So. Much. Garlic. I feel bad for people near me today, but it was a very good meal. :)
Noe 9 Oct 2011
Large shiny balls for light-shades.. cool bar-like interior.. good food with gluten free pasta.

It's not bad really. A little Jericho-priced, perhaps, but then you wouldn't go there if you weren't expecting that, would you?
Chap 10 Oct 2010
This is a review of the recently opened Mamma Mia in Walton St, Jericho, the arrival of which appears to be a cause for celebration amongst many of our fellow locals. I have to say that we were very, very disappointed! The buffalo mozzarella on the margherita pizza with was barely lukewarm and well past its best. The antipasti plate was adequately cooked, but bland. And my wife felt her pasta was inferior to anything she would cook at home. I would really like to support a local restaurant and I hope our bad experience can be put down to teething problems. But I am afraid you can get far superior Italian food (if not pizza) and at roughly the same cost in town.
David 21 May 2010
Review this venue