Refurbished and renamed since Sherpa, Nepalese restaurant Kadai & Naan offers a vast array of small spicy dishes. Customers can bring their own alcohol. Free delivery OX1/2/3/4. 15% off if you order online. Delivery also available through Deliveroo. 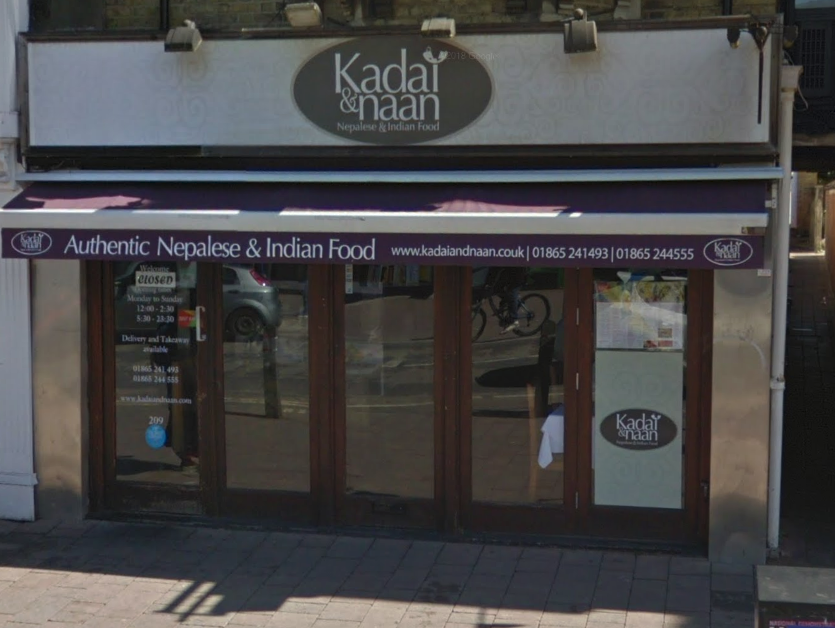 I might be spoilt by the high standard of Nepalese food in Oxford, but I enjoy Himalayan cuisine so much because the curries are usually much more complex and rich than are found in some more commercial Indian dishes. Maybe it's the high altitude or less well-known spices used, but the different levels of flavour are more poignant and clear. I'd never been to Kadai and Naan before, but I hoped that they would live up to my expectations, and the great reviews they've been getting. Faced by a wide variety of dishes, eventually only making a decision based on alternating meats, we kicked off with the Lamb Sadeko and the Garlic Chili Chicken. Nepalese food tends to be a bit hotter than Indian (go mild if you're sensitive) and the chicken did prove too much for my dining partner. For me, the spice was well pitched, adding roundness to beautifully-textured meat, tender and soft in both dishes. Like only great curry does, the warmth was followed by subtle aftertastes in both dishes, creating multi-faceted flavour and spice. When I was polishing off the sauce from the lamb, I did realise that it was very salty, but when combined with the meat, strong herbal flavours punched through the spice and the salt wasn't noticeable. Priced at £3-£5, I feel starters at curryhouses are often overlooked, but allow variation in the meal and a wider range of flavour. For our mains we opted for from the Chef's Specials, a curiously pitched menu that seems to suggest British-Nepalese fusion. With dishes like chicken breast marinated in mustard and pepper, and prawn with grapes, onion and white wine, you are forgiven for assuming recipes from a bit closer to home. However, these meals are intensely Nepalese and packed full of full, fragrant flavours. I ate the Marauti Chicken, heavily weighted by marauti, a rare Nepalese herb similar to peppermint. The freshness of the mint really spoke through, well balanced with warmth and a tomatoey richness. My dining partner chose the Rosemary Lamb Jhol, a dish I was fairly jealous of. The flavour of the rosemary was never really obvious, masked by an imbalance of coriander, but altogether the dish was still flavoursome and bold, buoyed by the superb lamb texture. Both mains were generous portions, although at around £10 each without rice or naan they should be, and we struggled to finish after the large starters. The waiter recommended a Chilean Merlot called 'Altitudes', a sweet wine that, fairly unexpectedly, was paired brilliantly with our rich dishes. Perhaps the most exciting part of the meal was the side dishes, the best of which was the Honey Naan. I've never even seen it as an option before, meaning we obviously had to have it. Like the wine, the sweetness really worked with the curry and gave birth to a new personal taste sensation: honey and mint. Try it, it's great, although on naan it makes for a sticky meal. We also ventured into a slightly rogue rice zone, with coconut rice and Kadai's lemon recipe, involving mustard seeds and curry leaves. Both chosen by the waiter to complement our curries, the portions were again very generous, but very tasty and well cooked.

The staff were fairly quiet and reserved, but very helpful, knowledgeable and attentive with very rapid service. Combined with the relaxed and intimate atmosphere (and the looping soundtrack of traditional Nepalese music) this makes an excellent restaurant for a quiet, and excellent meal.

Tried this place for the first time last week.

The service was really friendly, and they honoured a coupon of theirs that we had, even though we hadn't realised it was out of date.

The food was lovely - we're vegetarians and there was plenty of choice for us. Starters were delicious. One main dish and two side-portions of vegetable dishes were plenty for two, with a portion of rice and a naan.

It's a lovely handy local, so we'll be back in future.

I popped in here after work earlier this week for dinner as there have been several restaurants on this site recently. It bills itself as Nepalese and Indian and has the usual range of dishes with some Nepalese too. I had the intro offer which was three courses for £10.95. I started with delcious chicken momos with a nice spicy sauce, then I had Kadai Lamb with a garlic naan and some beautifully cooked rice. My dessert was carrot cake, which I must say was the most carroty carrot cake I've ever eaten. All the food was really delicious - not greasy and not overpoweringly spicy so I could actually taste the spices and their subtly different flavours.

I had a look around and see that there is also a rear dining room that looks like it would hold about 30-40 people so could be good for parties.

All in all I'm impressed with this place - great food, great value and good service from the same friendly Nepalese chap that runs Everest just round the corner on Howard Street. I'll be back soon!