Wine bar and pantry dining. Describe themselves as 'friendly, humble and slightly nostalgic...'

At Jack and Alice we warmly welcome you into our wine bar and pantry. Open daily from 9.00am (10.00am Sundays) for coffee, breakfast and cake, the day drifts effortlessly through lunch into afternoon tea, then the lights go down and we crack open a bottle of wine from our extensive cellar collection, and the stories start to flow. Sharing with friends, our meat, cheese and chocolate boards, make a perfect match to our great wines and fantastic company. Hot food is also served lunchtime and evening. So pull up a chair, make yourself comfortable, and be part of our story. 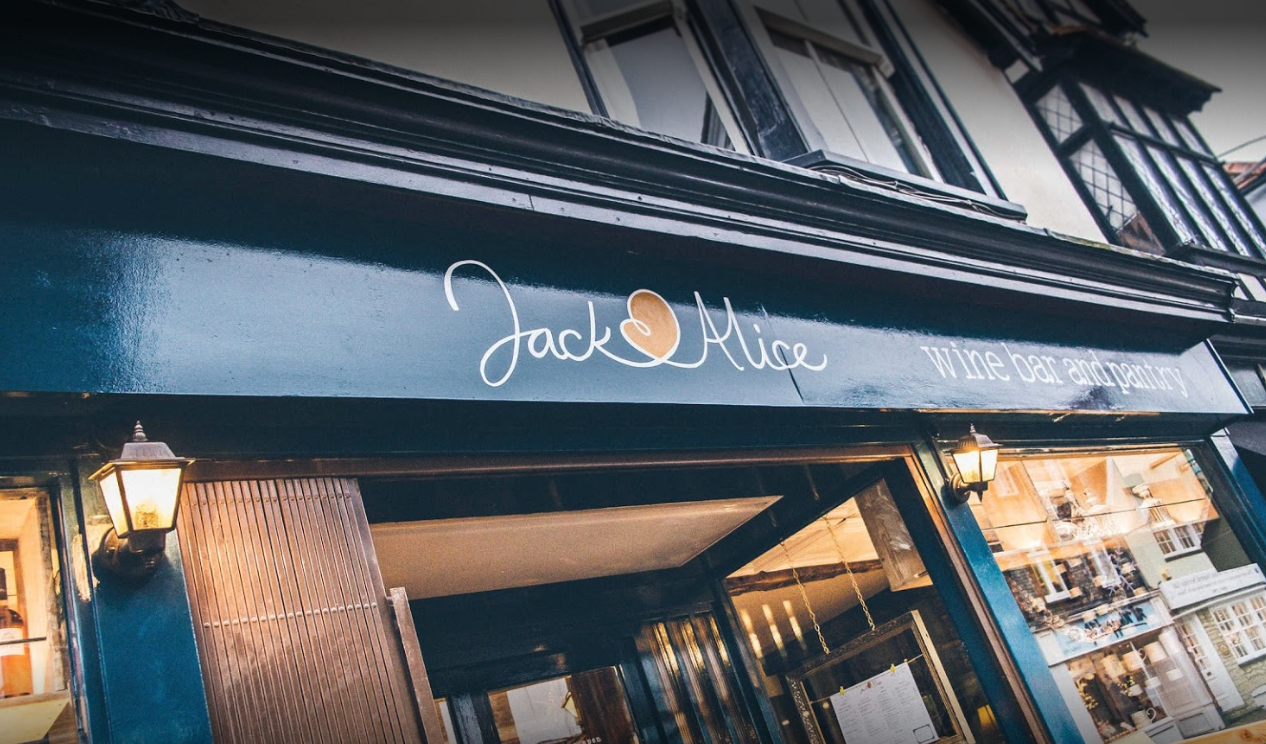 Known for its fabulous brunch and its extensive gin menu, Jack & Alice has become a go-to meeting point for the people of Thame. The brand describes itself as a wine bar and pantry dining which translates to Jack-of-all-trades sort of menu, offering cakes, fondue, brunch, deli platters and much more. On this occasion, having been lured in by the mouth-watering descriptions we tried out their 'Jack's Burger Shack' night to test out whether J & A can bring the same level of reliable tastiness to their pop-up evening menu.

As a venue, the layout and decor of J & A is great. It's like a wine bar-cum-café has been placed in a spacious antiques shop, with vintage furniture and low lighting creating a cosy, relaxed atmosphere to enjoy a meal in. Our drinks order was taken quickly and we settled into our seats, ready for a chilled out evening filled with chatter and burgers.

Sadly, this is where a fairly major problem arose. We ended up waiting 40 minutes for the burgers to arrive and then a further 10-15 minute-long wait for our sides, at which point we'd finished our burgers. In fairness, there was only one member of waiting staff - who was attentive and friendly - looking after about four tables (mostly couples) but we were the only ones eating so we were surprised at the lengthy delay. When the burgers did arrive, they were largely good. The Fried Chicken Burger was lukewarm and burnt on one side while the other side of the battered breast was soggy, suggesting that it had been sat on the side for a little while. The Cheese Burger and Jack's Stack were much better; although the patties varied in pinkness, the BBQ sauce and bacon was pleasant, and cheese on the burgers was, in fact, American cheese rather than the advertised cheddar - excellent news! The buns were soft and the ratios of the cheese, baby gem and tomato (as well as a surprise, unadvertised gherkin) to the patty was perfect. Overall, decent burgers but as one of my companions pointed out, they could have been more imaginative with their menu given the pricing and braver with cooking the meat which was a good enough quality that it would benefit from being done slightly rarer. Think Atomic Burger's playfulness or the outright insanity of Manchester-based Almost Famous' flavour combos (Frazzle dust anyone?).

Onto the sides. The Angry Fries were irritating: the chips were speckled with burger sauce and sriracha, with a smattering of brisket chilli and spring onions. Much to our amusement, the advertised crushed nachos (tortilla chips, we assumed) were replaced with ready salted crisps. The Mac and Brisket Burnt Ends was a lot more successful. The mac and cheese was creamy and the brisket ends were delightfully meaty and smoky. Again, good but far from being great. Hoping that J & A could claw back the evening we tried a couple of the desserts. From experience I know that the sundaes are amazing so in the spirit of moving away from the familiar, I went for an affogato, with the novel addition of amaretto. The vanilla ice cream was very nice, as was the amaretto but it was the espresso that let the dessert down. Although I'm not a coffee enthusiast, both my dining companions are and agreed with me that the espresso tasted burnt. The sticky toffee pudding was quickly wolfed down and greatly enjoyed.

Overall, some enjoyable dishes in amongst some less successful ones. A little more courage would help turn these high quality elements into showstoppers. That said, the main issue of the evening was the failed time management due to the lack of experience of the staff members. There is the potential for great food to come out of the kitchen - I know because I've eaten their fantastic veggie brunches - so I hope they are able to resolve this issue. I'll be back for a very leisurely brunch in the near future.

Meal for three with drinks, burgers, sides and two desserts came to £64.90.