Indian and Balti cuisine in an alley tucked behind the High Street.

Shezan stands on the 1st floor along a narrow passageway off the famous Oxford High Street. It dates from the early eighteenth century and is a grade II listed building built c. 1679. Shezan is Oxford’s only genuine Indian and Balti restaurant and is renowned for its wide selection of delicious freshly made dishes to suit everyone’s taste including vegetarians. Vital at Shezan is the skillful roasting and blending of spices to create the many unique masalas, essential for totally authentic Indian and Balti cuisine. 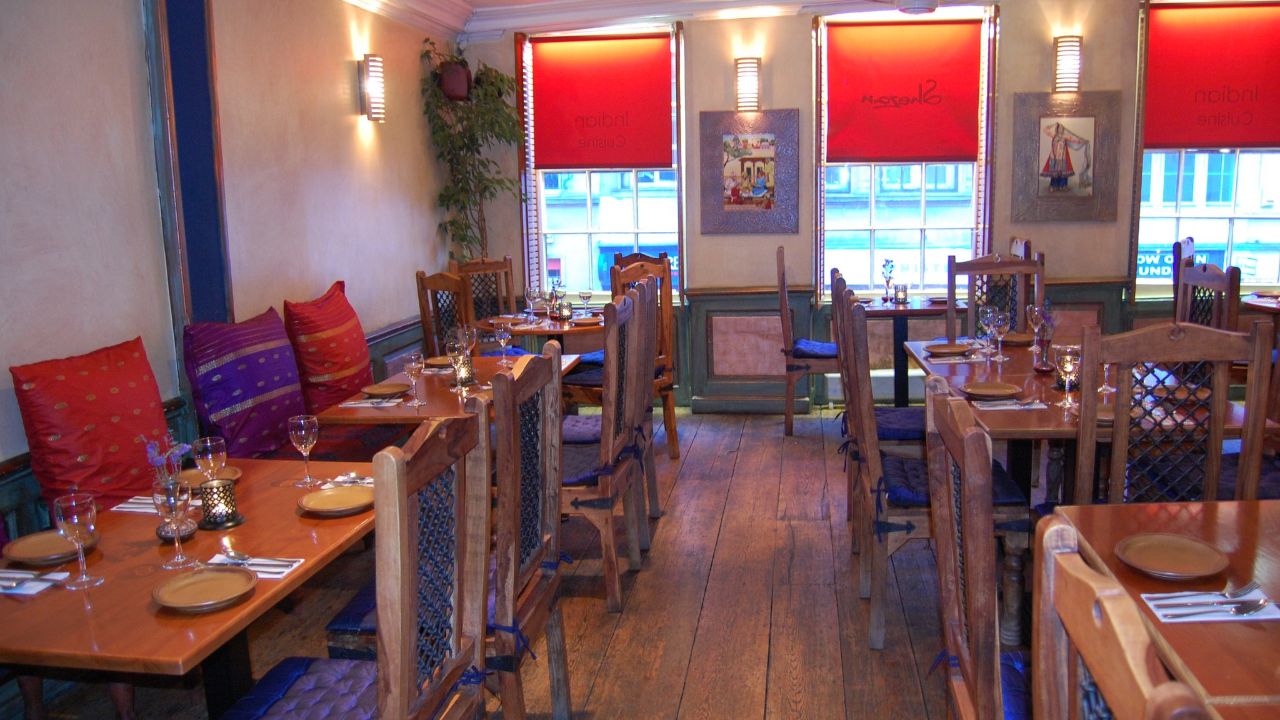 On Sunday evening, our party of five decided to treat ourselves to a meal out. We quickly settled on Shezan as our destination, which claims to be Oxford’s only genuine Indian and Balti restaurant. This grade II listed venue, used as a dining hall since 1915, is tucked away on the high street above Reiss, just past the alleyway that leads down to the Chequers pub. Shezan has been a firm favourite of mine since I moved to Oxford and I’ve been there for many an occasion, including end of term dinners with tutors, 21st birthday parties, and boozy reunions with friends visiting the city.

Shezan’s décor is characterful and admirably put together, retaining a sense of individuality throughout the restaurant without being overwhelming or overdone. When we arrived we were quickly seated and opted for a bottle of the house white and a selection of papadums (they have different flavours!) while we worked out what to order. Our waiter was attentive throughout the meal; overall the service of food was quick without being rushed.

No one was in the mood for anything particularly hot so we decided to order a variety of milder dishes including the Murg Hyderabadi, deliciously tender chicken cooked in coconut milk with a selection of herbs, spices and freshly chopped coriander; Saag Paneer, fresh spinach cooked with cubes of paneer cheese, and a Prawn Masala Goa Style, a dish of shrimps delicately spiced and cooked in a coconut sauce with green herbs. However, the table’s firm favourite was the classic Lamb Rogan Josh, which we were informed by the menu was the best example of Mughal Cuisine, Shezan’s speciality. We decided to keep it simple with our sides, ordering 3 pilau rice portions and 3 garlic naans between five of us, which ended up being more than enough to go around. The portion sizes at Shezan are generous and definitely made for sharing. The naans were light and flavourful, and the rice was perfectly cooked and topped with very finely chopped, delicately fried onion, which raised the side from standard curry-house fare to something a bit more special.

My original choice of main had been the Khybari Chana Aloo, a dish of spiced chick peas and potatoes mixed in a tamarind sauce, but I was told that no potato dishes were available, so I opted instead for the Turka Daal; slow cooked lentils simmered in onion, ginger and golden fried garlic. Because I had to change my order on the spot, I went for the Daal as a safe option, but was somewhat disappointed with the consistency and flavour of the dish – it was quite bland, especially compared to dishes I had ordered at Shezan in the past, and had a very thin texture. That being said, my slight dissatisfaction was not at all representative of the rest of the table’s experience, all of whom greatly enjoyed the dishes they selected as mains, as well as their tastes of everyone else’s orders.

What makes Shezan one of the best Indian restaurants in Oxford is their elevation of standard dishes. It may be a bit pricier than most curry houses in Oxford, but you definitely get what you pay for.

Emma Pearson September 27, 2011
It’s quite easy not to immediately notice Shezan as you walk down the High Street, since it’s tucked away on the first floor. This, however, is one of its charms. It is very pleasant to sit by the window and watch the bustle below, and it seems that enough people know about it that on a Tuesday night, when I went, the restaurant was full.

The space comprises a not overly large room, with a bar at one end and the aforementioned windows at the other. The decor is warm - with bright pictures, patterned cushions and plants in the corners, above a planked wooden floor. The staff were friendly and seemed to wait at all the tables interchangeably rather than having one member of staff per group of guests. Since the place is relatively small, this did not seem to impinge upon organisation, and gave the place an informal but welcoming atmosphere. A gentleman I presumed was the manager took our main order, making me pronounce the Indian names rather than just point on the menu, and telling me about the namesake of the Jhinga Chengayzi dish who was an Indian conqueror (though I forgot the details of his story in the general excitement of food.)

First we had poppadoms (because you have to have poppadoms). My companion (who is more of a connoisseur of Indian restaurants in Oxford than me) said that in some places the poppadoms are on the table when you arrive - here, however, you do have to order them. Another point about the menu is that it does not give any indication as to the spiciness of the dishes. This is pleasingly unpatronising, but you have to be prepared to venture a little into the unknown. If you’re worried, order the Homemade Raita as a side.

For my starter I had the pakoras, which indeed were rather spicier than I had anticipated, but certainly none the worse for it. My companion had the Chicken Tikka. Both of these dishes were beautifully presented, with the pakoras and pieces of fragrant chicken carefully arranged on the plates underneath drizzled sauces. I liked the plates. They were snazzy almost-but-not-quite-square ones, and they made the food look very pretty.

For the main course, my companion had the Mixed Tandoori Grill, which arrived audibly sizzling. It got a good review from my companion for containing grilled fish as well as meat, and we both thoroughly approved of the aromatic marinade. My Jhinga Chengazi (giant prawns cooked in the tandoori oven with masala sauce) was also excellent – the prawns themselves being very tasty quite apart from the sauce. We also had the Raita and Turka Daal as sides, both enjoyable. I got the sense throughout the meal of the food being fresh and carefully prepared, and at the end, even though I was full owing to the mountain of food we had ordered, I did not feel stuffed and there was a definite absence of grease. The aforesaid mountain – including poppadoms, two starters, two mains, two sides, rice, garlic naan, and a bottle of rose wine – came to just over £60.

The one quibble I could take up with this place is that there were some fairly long waits before food actually arrived. But, in fairness, there were some very big parties to serve the night we were there, and we were so well looked after by the staff that we never got that feeling of being forgotten about. You may want to head elsewhere for a quick pre-theatre or cinema meal, but if you are in no rush and want a relaxed evening in a restaurant with superb food then I would thoroughly recommend Shezan.

Having been to most of the other Indians in Oxford this compares very favourably on all levels. The food was fantastic: it was of a specialist style/location (the area I forget) different enough from the other Indians in Oxford it makes you think there must be so many more styles we are missing out on. But not so different it still satisfied that “I’m English and I want a bad ass curry” craving!

The décor is the best in Oxford, it avoids looking too modern (hotel chain waiting area) or too traditional (antiques store), it’s more colourful and authentic…for some reason I would say fresh and practical! and this continues right down to the fun bowls the food is served in. The service was also great with everything coming at just the right time and very politely.

This is a great little find, which coincidently is its only flaw. Even though it’s on High St it is hidden away and as a result we were one of only a few tables eating in what should be one of Oxford's busiest Indians.
A 5 Jul 2011
Excellent service, and actually one of the real Indian restaurant in Oxford. The staff were great: quick and very attentive on a busy Monday night. The food was delicious, in generous quantities. Me + my wife and another six friends, we had one of our best night of our life in there. The owner (Salim) was so friendly with every one, just like he knew all his customers for many years. We almost tried every thing on that night. I tell you guys you all should try once. The food tasted as good as mum's. Our waiter was even actually from Delhi.

As for the critics below, if a standard British Indian curry house is what you want, then maybe this isn't the place for you - at this place, the food wasn't greasy, the ingredients were fresh and the flavours authentic. And the other curry houses are cheaper for a reason - the food here is worth the small premium. We'll definitely be coming back very very soon.