Apart from a brief hiatus when it was called something else, The Standard has been serving curries to Oxford restaurants since 1972, and is much beloved by student groups, for rowing club dinners and the like. It's fairly Standard (!) Indian restaurant fare, a little pricey, but with a good vegetarian selection. 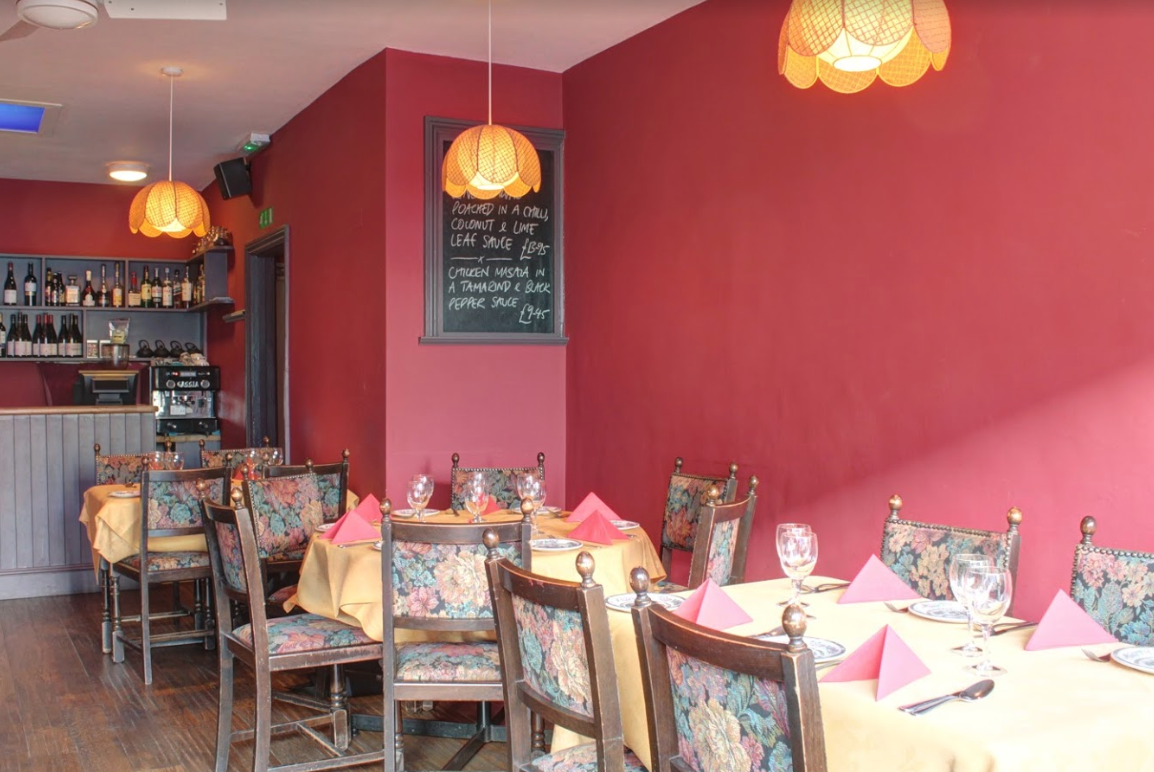 Over the years I've seen different versions of the 'Standard' come and go and the food and service is always good. I went for lunch recently and enjoyed excellent service and a delicious meal. The waiter on duty paid care and attention to my group of friends and made sure we had everything we needed, and even volunteered to bring us water with our deserts/coffees to cool us down from our curries. Always a good restaurant, and always worth visiting for lunch or dinner.

Had my first take away from the Standard last night.
Delicious food and welcoming staff. Light vegetarian curry, interesting flavours and side dishes and very nicely presented.

I enjoy the cosiness of this place and their delicious food. Delicious paneer korai and saag daal. And if you haven't tried the royal cinnamon ice cream for dessert, you're missing out.

The Standard Tandoori now titled simply 'The Standard' - I have to state that this was the best food experiences I've had in Oxford. The service from beginning to end was impeccable, and the portions sizes were perfect for 2 people sharing.  The saag dhal dish was perfect, lamb nihari melted in your mouth and the chicken tandoori was equally amazing to my taste buds. I highly recommend The Standard as the best indian/bengali/gujrati food in Oxford. I look forward to going again very soon.

shadz 22 Sep 2012
Last time I went to the Standard Indian was when I lived in England in 1997, and regularly ordered the Vegetable Dhansak. So very delicious, and I've tried to find an Indian restaurant in the States that serves it, but I've had no luck. I've tried making it with recipes I've found online. Nothing compares. Thinking of planning a trip back to England just for this dish at this restaurant.

Let's hope their own Vegetable Dhansak is still as good thirteen years later.

Betty 18 Oct 2010
I recently purchased my first takeaway order from the Standard and felt compelled to share my immediate strong opinions of the restaurant. The decor is quaint and old-fashioned, but the restaurant is a little too dark. The waiter who served me was very sweet and friendly. I was told upon arrival that ordering takeaways by phone was preferable to in-restaurant, but was happy to wait at one of the vacant tables. My order of the basic vegetable curry and a chapati was very simple, but I was pleasantly surprised at the remarkable speed in which is was made - certainly under 10 minutes. When I got home and extracted my food, my hands were immediately covered in oil overflowing from the curry, which I opened and proceeded to drain 3 tablespoons of fat from the single portion. The curry, described as "medium hot" was mild and bland, but what displeased me most was the mushy greasy texture, the sweetcorn that seemed out of place in the dish, and the fragments of baby carrots which dissolved into mush in the mouth. I ate less than half the curry. The chapati seemed rather doughy, excessively pale and underdone but I ate it as I was hungry and it was far less offensive than the curry. After I had left the curry, pools of oil reappeared at its surface; I can't imagine how much oil it contained. If this meal had been served to me in the restaurant I would have sent it back. This for me was the bad, dated "English curry" which I do not expect to be served these days. The waiter reiterated to me that in future, I should order by phone so I can only assume this rushed meal was a consequence of being so eager to offer good service that substandard food is knocked together in a hurry. I plan to give the Standard another chance as it was cheap, friendly, and the parties eating in the restaurant seemed to be enjoying their meals. But I will certainly call in my order in advance!
Katie 27 Apr 2009
A great Indian restaurant - my standard choice actually after trying a few in Oxford. The food is a little expensive but the taste and quality are both good. I can understand the comments about the rice portions, they are a little miserly, but otherwise a great place to eat.
James 30 Mar 2009
I may be the only one here disappointed with the Standard Tandoori. The food, I found, was quite offensive to my Indian tastebuds. You might be thinking "Here goes! another one of those moaners who hate anything that doesn't taste like it does back home. Tough luck!".

However, in this case I was truly disappointed. For £8.95 each we ordered the Chef's special Bengal Pilau and Lamb Korai (karahi) in addition to a Lamb Madras for £6.65. For the price, we were expecting decent portions and tasty food. Alas! Neither of those came true.

The Bengal Pilau was served on a flat dish which could barely contain any rice and had a terrible garnish of roughly chopped tomatoes and lettuce. It came with a sauce which frankly tasted of nothing other than sugar and Ghee. The Chef clearly needs to hold back on the Ghee.

The Lamb Korai was not too bad but my only complain is regarding the serving size which is far too small for almost £9.

However, the Lamb Madras, was the main shocker. The overpowering taste in that dish was that of chilli powder. I know Indian food is supposed to be spicy but we don't go around emptying packets of chilli powder in our dishes.

The last nail was when our bill arrived and before we could stop the payment, they had charged us a quid extra for the popadums.

If you do happen go into the Standard Tandoori, my advice would be a) stick to the tomato based dishes and dishes enjoyed by other reviewers, b) it may be better to stick to the different breads rather than rice as the serving size is small, and most importantly c) check your bill carefully.
shaz 30 May 2008
The Standard is certainly unpretentious. Although the boring name and somewhat sinister exterior were initially off-putting, the food, service and value for money were excellent. The interior is also fairly dated, yet welcoming and unintimidating. The menu was clear and varied, when our food arrived it was tasty and plentiful and our waiters were refreshingly helpful and polite. The man on the next table dined alone and was clearly a regular in the way he conversed with the staff, showing how comfortable a place it is to be and eat in. It is also notable that my partner was vegetarian at the time and had no problems finding a great choice. Highly recommended for a quite meal with friends on a weeknight!
Tash 8 Jan 2008
I had a meal last night, it was good though it took a long time. it was a busy night. Overall 5/10.
Anonymous 28 Oct 2006
Oxford is lucky enough to have a glut of excellent restaurants, many of which are Indian. The Standard on Walton Street, which has been serving Oxford with Indian food for over twenty years, is one of the best in terms of quality of food and value for money. Another advantage is its location - situated opposite the Phoenix cinema, it's perfect for a quick curry before or after a film. We went on a Tuesday out of term time, so it was relaxed and fairly quiet (it is much busier during term with students around).

The service was quick, the waiters helpful but not over-attentive, and the atmosphere pleasantly laid back. For starters, we tried the ever-popular Onion Bhaji and an Aloo Chat, a potato dish cooked in various spices. These were brought promptly, along with a pleasant yoghurt sauce. Both dishes were good; the Bahji, unlike some others around Oxford, was crisp and not stodgy and the Aloo Chat flavoursome (and filling). Next we had a Motter Paneer (a chick-pea dish cooked in a sauce with cubes of cheese) and a Brinjal (aubergine) Bhaji, and a Vegetable Bhaji, accompanied with rice. All these dishes were excellent, but in particular the combination of flavours in the Vegetable Bhaji made it a good companion to the Motter Panir. The portions were generous: even the healthiest appetite shoudn't be left unsatisfied. For dessert, we chose Pistachio Khulfhi (delicious soft Indian ice-cream) and Rosso Gulla, one of their traditional Indian desserts which consisted of sweet sponge in syrup.

The restaurant staff obviously take their food and service seriously, and are justifiably proud of their chef, with awards and reviews posted in the window and at the back of the restaurant. They also keep an eye out for cinema-goers who may be in a hurry and try to cater to everyone's needs. One concern is that the restaurant area is only of moderate size and could easily be filled on a busy night - it may be worth booking first if you plan to go on a term-time weekend - but if you prefer to be more spontaneous, just turn up and risk a short wait. Very good value - pay the Standard a visit.