Take a break from shopping, sightseeing or a busy day of work or revision to grab a real Italian coffee, lunch and a light bite, or to sample some refreshing gelati! 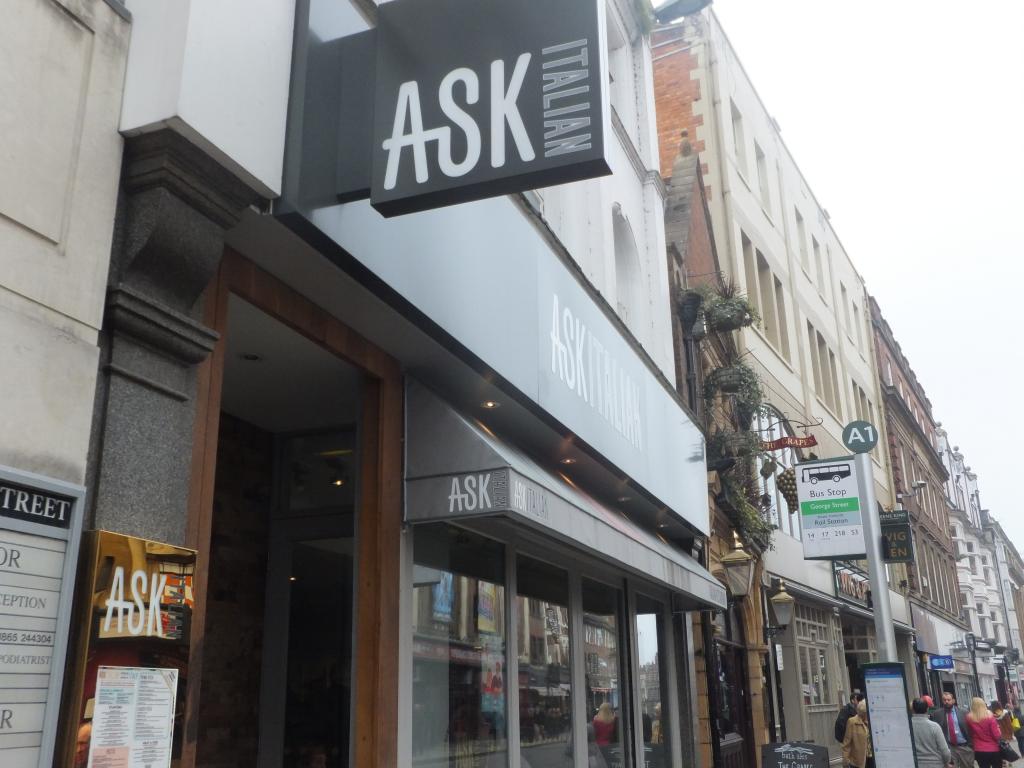 We had another great meal at ASK last night - the service is excellent, whether you are having three courses or a single meal discounted with a voucher. A relaxing and fun atmosphere and the staff are friendly. I thought I should finally write a review!
Julie 23 Jul 2011
We both really enjoyed our meal at Ask Oxford, the restaurant was bright and pleasant, our waitress was great friendly, attentive, without being overbearing and was deserving of her tip. The garlic mushrooms were great, hot and sizzling and my partner said that his pizza Neopolitan was better than some of the ones he had while in Italy (lots of king prawns and tuna)! My pasta was yummy too. If we ever go back to Oxford we will visit Ask again that's for sure. It was a Thursday night and there seemed to be a steady stream of customers. Just the right prices too. Great location in the centre of Oxford.
Bex 26 Jul 2009
I booked, I waited, I left without my main course or else we would have missed the curtain at the theatre. Lack of concern from the waitress - 'yes, it's on its way...' - but when??? We had to approach the manager, who was trying to get the food out from the kitchen; 'would we still like it?'?? With 5 minutes to eat?? Erm, no!!! In fairness, he did ask us to come back for a free meal after the theatre by way of apology, but having gone in 2 hours before the theatre to give us plenty of time and avoid this situation, I was most upset - especially as I had visiting family. Sad to say I will not return in a hurry - I have had better luck at the sister restaurant down the road and on this particular evening the competition opposite got my custom after the theatre and it was lovely.
elle 16 May 2008
I enjoyed eating here, the service was polite and prompt, the food was of good quality and the atmosphere was excellent, and all at a reasonable price. The wine choice was a little limited, but you can't have everything!
James 4 Oct 2007
A standard pasta/pizza chain, but this branch seems to be of a consistent high standard. Reasonably efficient yet polite staff. Hot good food, and reasonable prices. Not amazing, but definitely a good place to go to relieve any Italian food cravings.
Oxford Student 31 Mar 2007

Hi, my name is Moussa Mechti, I was one of the people who opened the restaurant - I think it was in 1999 - under the management of Mr Chai, and the boss was Mr Omar. I am very happy to remember those days and all the staff, specially the kitchen staff, everybody was great and professional, I will never forget the 4 years I worked with ASK and I wish all the luck to the restaurant and say hi to all the staff and management. I live now in the United States since I got my green card in 2000 and I wish one day to come back and try the mozzarella garlic bread and quattro formaggio pizza or penne al tonno pasta. Thank you and good luck to everybody!

roberto 27 Mar 2007
Fairly generic and bland food, it is a chain and sadly it shows.
Personally I won't rush back as quite frankly for the same price you can go to Carluccio's, Pizza Express or even Prego. Very unremarkable on all fronts (atmosphere, food, service) but I guess being in the "party zone" (the police's not my own words) it probably has its uses. It isn't BAD,it just isn't GOOD! :)

Pamplemousse 11 Jan 2007
It rocks! The food is delicious, the prices are low: everything a teenager would want for a night out with the gals.
Maia 10 Feb 2006
ASK seems to be one of those places where everyone has eaten at least a million times (in one town or another) and no one seems to rave about. Certainly it has been my experience that while it's not massively exciting (perhaps like a number of other pizza super-chains in Oxford) Ask is 'good enough', not too expensive, pretty tasty, quite stylish, etc, etc. Please do excuse my lack of excitement - and don't think that ASK isn't worth a try if you've never been. It's a staple of Oxford's dining establishments, and does have a couple of gems on the menu - it's just a bit dull. I'm not entirely sure if this is due to the ambience, or the menu, or simply the fact that you've seen so may ASKs before, but whatever it is, it's not enough to put me off going.

There are a couple of really good dishes, particularly the pesto pizzas (the Genovese and the Mediterranea), although I wouldn't recommend these if you decide to take advantage of ASK's 'any takeaway pizza for £5' offer as on the occasions I have tried this, the trip home renders these pizzas unappetisingly oily. In the restaurant however, when they're still nice and hot, they taste great. I would also highly recommend their Penne del Giardino which, when I tried it, was packed full of fresh and flavoursome vegetables. Other veggie options I have tried, particularly a penne dish which came in a rich sundried tomato, artichoke and chilli sauce, have also been very good. Generally ASK seems to serve its vegetarian clientele somewhat better than its competitors. There are still plenty of options for the more carnivorous amongst us however - my boyfriend is a particular fan of the Inferno pizza which comes loaded with pepperoni and chillis. Prices are reasonable, with pizzas coming in at an average of £6.50 or so and pasta dishes generally a little bit more.

All in all, ASK is worth a trip: it probably won't knock your socks off but it won't let you down either.

Victoria Lorne 9 May 2004
Review this venue