Our menus are bursting with Spanish flavours and cooked in a traditional style, a great way to enjoy the true taste of Spain! So forget the traditional way of ordering meals with starters and main courses and treat yourself to a Spanish banquet. Al-Andalus Tapas Bar is the perfect place to hold any celebration. Seating up to 40 we can help you to select food and drink to suit your individual requirements. 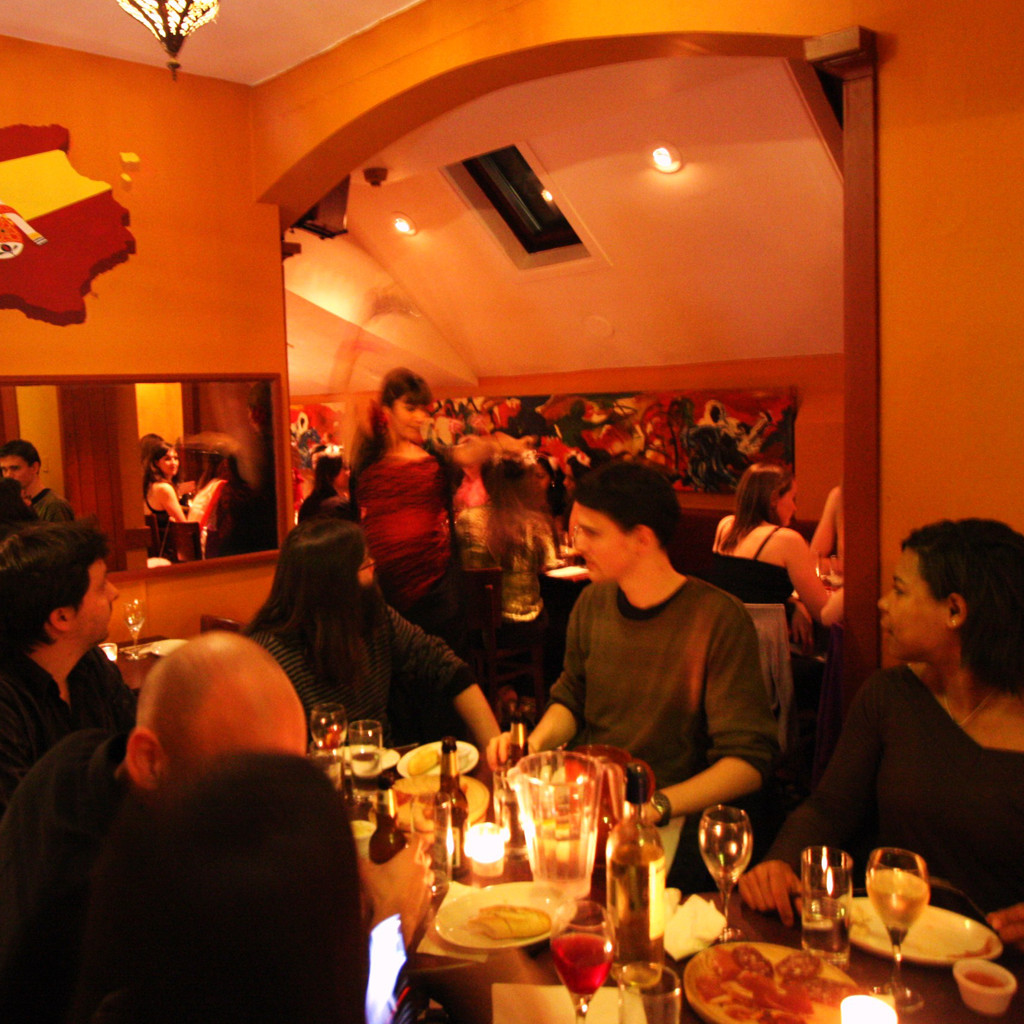 Al-Andalus, situated on Little Clarendon Street, is set to be my go-to tapas restaurant for the foreseeable future. The food was outstanding and was probably the best tapas I've had outside of Spain.

Al-Andalus have done a fantastic job of decorating the restaurant to make their clients feel completely immersed in Spanish culture. The yellowy-orange walls were covered with images of bulls and flamenco dancers and occupying one of the walls was a large painted map of España, helping diners imagine that they were in a sunny tapas bar just off the plaza. Unfortunately, because of the long thin layout of the restaurant, they had to open the door right next to our table to get some air into the room, and thus we were reminded that we were, in fact, in cold, grey Britain.

The menu is largely composed of 'hot' tapas, with 'cold' tapas, salads & extras and paellas for two people available as well as the chef's specials. Choosing what we wanted to eat took quite a bit of time; my dining companion follows a dairy-free diet so we asked a member of staff for assistance as although vegetarian and gluten-free dishes were marked, the dairy-free ones were not. After waiting a while for advice, we asked another member of staff for help and this time they promptly got the manager. He inquired whether my friend was lactose-free or dairy-free then proceeded to point out all the options. Initially, my friend was a little sceptical that the dishes chosen would actually be dairy-free as the manager appeared to only be avoiding the options which contained cheese and so she was concerned that the food might be cooked in butter. Overall, I think the manager knew his stuff and was very helpful and we were confident that the majority of the dishes (with the exception of the datiles bacon) were free from dairy. To drink, I had a small bottle of refreshing Estrella Galicia, and we shared a large jug of Sangria for £14.50 which provided about 5 glasses worth and was strong and met an important criteria for me personally by containing lots of fruit at the bottom of the jug. Initially, we ordered seven dishes, which were roughly between £4-6 per dish, but we became greedy and I ordered another dish right towards the end. The beauty of tapas is that you can eat as much or as little as you like throughout the meal, and so it's perfect for any appetite, however big or small.

The patatas bravas caused us some initial concern; the dish came with what looked like sour cream on top of the patatas and we became anxious that my companion would not be able to eat the dish but after reassurance from the manager who told us it was actually garlic mayonnaise, we tucked into our feast. The potatoes were crispy and the bravas sauce was smooth, sweet and mild at first then it slowly developed spicier. We enjoyed a very generous portion of chorizo which was mild, tasty and served hot. The fritos bacalao, deep-fried cod with a salt and pepper batter served with garlic mayo, was crispy and perfectly cooked. The pollo y chorzio con patatas (chicken and chorizo stew with potatoes) tasted largely of bell peppers and tomatoes, which was homely and comforting, especially given the succulent texture of the chicken. Perhaps we could have done with some bread to mop up the sauce but potatoes sufficed nicely. The garlicky champinones (mushrooms) were adorable and juicy, while the berenjenas a la miel (deep-fried aubergine) was soft on the inside and wonderfully crunchy on the outside, and went beautifully with the floral honey drizzled on top. The boquerones (deep fried whitebait) were some of the best whitebait I've ever had. They seemed to have been marinated in a herby vinegar beforehand and so when you bit into the crispy shell, this amazing fresh acidic taste cut through the batter. The most adventurous dish I tried were the datiles bacon, dates stuffed with blue cheese and held together by strips of bacon - frankly, it shouldn't work but it does! The sweetness of the date combined with the salty bacon and tang of the cheese made for an indulgent treat, which I can imagine would go down very well during the colder months.

After this bountiful feast, we had stuffed ourselves silly and felt very satisfied with our dinner. When we visited, it was a surprisingly busy Wednesday evening so the service was slow and a few dishes were forgotten but that is completely understandable and hasn't put me off visiting again. I have already recommended Al-Andulas to multiple people and intend to visit again soon to sample more tapas, the paella, and maybe I'll even leave enough room for dessert. Muchos gracias Al-Andulas.

Visited Al-Andalus last week and I can say it was a lovely experience. The service was very friendly and informative - recommendations were made on drinks and the waitress actually told us that we didn't need to order any more dishes!

The food came promptly and was lovely - what we expected from Tapas. I also noticed that the portions where bigger than when I went to the restaurant last time (the prices did seem to be ever so slightly higher than a few years ago, but then again to be expected and in line with restaurants in Oxford).

Would definitely go again and will be bringing friends along too!

Went to this Spanish restaurant on Valentine's Day with my wife, after being on holiday to Spain many times, I knew what to expect. It wasn't a true Spanish experience at all. Food not authentic and overpriced. Would not recommend and would not go again.

Richard 20 Feb 2011
I went here with my boyfriend for Valentine's. It had a really good atmosphere and the food was very tasty. Service was friendly, too.
17 Feb 2011
Not at all impressed with the food and can't understand why the place was so busy. Service wasn't bad but we won't be going again (even if someone else is paying!).
Amy 13 Feb 2011
Have been a few times, always good - fresh and tasty food, pretty authentic. Nice surroundings, good service. Opens late and gets busier around 10pm.
benrichardson 7 Apr 2010
Visited the restaurant last week and was worth the visit. Good choice of tapas and had great fun with my friends.
Dominark 14 Dec 2009
Visited this place last week and thought by looking at the quite interesting menu and the fact that almost every table was taken, it should be a good dining experience. To cut a long story short the service was fast and prompt if a little blunt at times, the tapas was fairly hit and miss and some parts such as the vegetable brochetas (veg, skewered and dipped in a fat fryer!) extremely overpriced. It was an average meal with no real pros and at a cost - would certainly look elsewhere for tapas in future but wouldn't rule it out if someone else was paying!
Tim Fire 25 Oct 2009
Had a disappointing meal with friends here last weekend. The service was rushed and inattentive and I thought the food was not that good, especially considering the inflated prices.

A friend and I opted to share the meat platter and it was pretty forgettable with tough steak cooked to the point of incineration. I know Spanish-speaking countries often serve steak well done but I'm definitely in the French camp of having it still bleeding. This was accompanied by other bits including very mediocre chicken and lacklustre chips. My friend's girlfriend's vegi tapas dishes were also decidedly average and seemed really expensive based on the potential cost of the raw ingredients used.

We had asked for her tapas dishes to arrive at the same time as our meat dish, which they agreed to, but this did not happen. This meant she'd almost finished by the time ours arrived. To add to this, when we asked for a carafe of still water we were given a bottle of water costing £3.50. The tap variety as an option would have been nice.

This was the second visit I had made to Al-Andalus and I won't be rushing back for a third. There are better tapas options in Oxford and for less money too.
Joe B 20 Oct 2009
One of my favourite restaurants in Oxford! Everything I've tried here has been delicious and authentic, from the tapas - I've had the octopus, the tortilitos, and the bacon-wrapped dates, to the enormous paella dishes. It's true, the non-tapas food does take a very long time, as they warn on the menu - but that's because it's made to order, and thus is one of the freshest, most flavourful options out there. The restaurant is also lovely and intimate, with warm saffron decor - a welcome respite from the chain restaurants that dot Little Clarendon Street.
Isabella 6 May 2009
This restaurant is top-notch. I dined here with a few friends and everybody was impressed. I have since been back for lunch and their lunch deals are both good value and with plenty of choice. The staff are helpful and the atmosphere very enjoyable - definitely recommended.
James 30 Mar 2009
Have had too many bland, forgettable experiences in UK tapas restaurants to normally get excited about going, but I was 'dragged' along by my wife - and I was very glad she did. Pleasant, relaxed surroundings, and friendly, knowledgeable Spanish staff were a good sign. The advice given was good and accurate. The dishes arrived at intervals and were piping hot and well presented. The main thing though was the taste. Every dish burst out with flavour.
pps 19 Mar 2009
Review this venue