Open to midnight every day.

What's a more English meal than fish and chips? It's a classic that goes great with tea or beer! 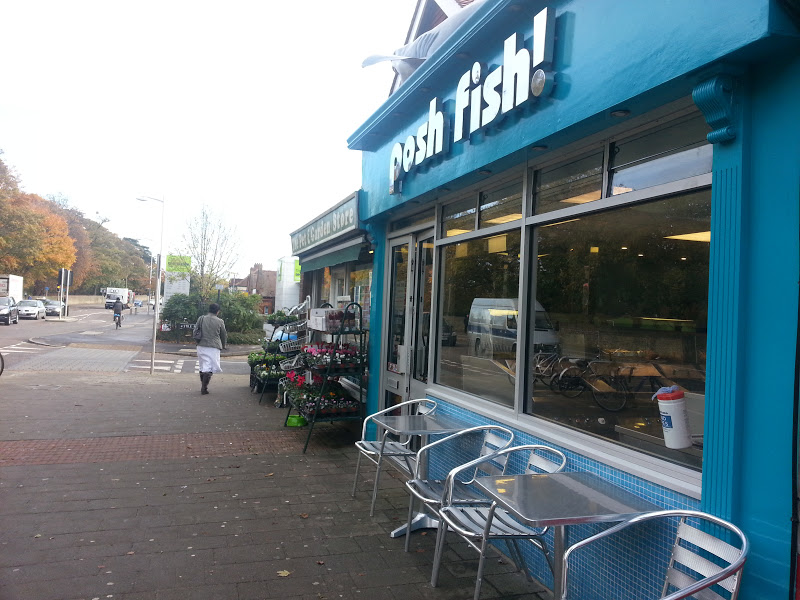 Jen is a Reviewer September 26, 2010
Hi Splash - they've obviously heard your plea. I was ordering on the phone just now and they asked if I wanted my (non-battered) haddock fried or grilled.
Lita Doolan May 22, 2002
When a fire destroyed Headington's well-loved chippy (the Mediterranean) there was uncertainty as to whether the eatery would re-open. Last week saw the re-branding of the restaurant when Posh Fish opened for business. The portions are as huge as ever, and you need a reinforced carrier bag to take home a large serving of chips. The usual takeaway favourites are available including curry sauce, beans and mushy peas as well as ice-cold drinks. A novel twist with Posh Fish are the continental touches: Greek Baklava is on sale next to brownies, cookies and millionaire's shortbread.

Having been a customer of the erstwhile Mediterranean for ten years, it is good to see the same customer-friendly team re-open Posh Fish. The décor is contemporary, with sharp mirrors and blue tiling, and the premises are so clean that the surfaces shine. There is chrome furniture on the pavement for you to sit on and enjoy their thick frothy cappucinos and hot chocolates on a balmy evening. Waiter service is available at the back of the restaurant in a light airy space. Meals come with an optional Greek-style salad complete with black olives and a lemon wedge. The fish has a crispy batter and is piping hot and the chips are thick and juicy. Fish and chips costs around a fiver, snacks such as jacket potatoes and vegetarian burgers are also available. If you have a serious attack of the munchies then Posh Fish is the place for you.

Wow what a surprise! Last Friday around 8.30pm, the wife and one of my brood along with my good self stopped off en route back to Aylesbury for "something to eat". OMG... we are definitely coming back. No more to be said. Best ever - ever!

We drop by on our way back from the Churchill whenever we can. We have been going there for years now. It is a great chippy - and consistently so. The portions are big, and the saveloys are the best ever!

We visited Posh Fish by chance, after visiting the local hospital. We went for the Mixed Grill. This should have the word Giant in front. It's huge. I'm a pretty big eater, but couldn't finish it. Thoroughly enjoyed it though, and enough chips left over between 2 of us to take home for a second meal warmed up the following day. Still delicious. My waistline is glad that we can't visit too often as it's out of our area, but if we are there, we'll be going back for sure.

We love Posh Fish but the last couple of times we've visited we've found the chips to be sadly chewy and not at all up to their usual standards. Please bring back yummy chips, Posh Fish, because if not we have to trawl Oxford for another Fish and Chip provider!

Good meal of fish and chips but disappointed to find the fish was not skinned. Ugh.

I visit Posh Fish on a regular basis and love the food, I always find the staff friendly polite and helpful so am surprised by the comments of BarntheBarn. Food is a great price for the tremendous portion sizes which I must add are always steaming hot and beautifully fresh. As for the comments regarding better fish and chip shops nearby, I have friends that visit from various parts of the country who always pop into Posh Fish when in Oxford, it really simply cannot be beaten. Love the new shark addition which is quite different to headington's other shark, but they are clearly hunting in pairs in Headington right now. My advice: try it if you haven't already, it really is the plaice to be.

I went around 9pm one evening and there was huge line of people each wanting seemingly difficult orders of food which is maybe why the shop calls itself Posh Fish - due to the nature of it's customers more diverse tastes.

So twenty minutes later I'm eventually served, the service is extremely abrupt and verging on rude in it's shear grumpiness.

There was a reasonable amount of food, I planned to eat en-route to home so 'small' was sufficiently big enough.

Sadly the sausage was incredibly greasy and had very little flavour. The same, grease wise, could be said of the chips. There are simply much better fish & chip shops nearby, even accepting the varying day-to-day ingredients.

This restaurant is now not linked to Posh Fish in Walton Street, Jericho which was sold by the owners here a while ago.

The roof is now decorated with a large shark in reference to the famous Headington shark sculpture along the road. The restaurant does not serve shark.

The restaurant area is cafe style and fairly informal and relaxed. Alongside soft drinks, red and white wine can be purchased when eating in.

As a hungry visitor to the area yesterday I was more than pleased with the cod, chips and baked beans I ordered. Very good indeed!

I have had chips from here for a while now and are the best place if you are really hungry and a small chips only £1.50, and it's the size of most places' large for like a £1 less. I don't go to any other chippy now. I wish they did a card to get points and to show how loyal their customers are. And if you can handle it try their mixed grill; I could not finish it but it was worth it :).

I'd been building this place up in my head since I saw it reopened last month, to the point where I probably shouldn't have even tried it, knowing that it could never be as good as I hoped. But the sad truth is, even if I'd had more reasonable expectations from it, they still would have been disappointed.

The batter of the fish was soggy, tasteless, and greasy; the only good thing about it was that I was able to scrape it mostly off and eat the cod alone. The chips were limp and flabby; the mushy peas were similarly bland, although probably the tastiest of the whole lot.

I was sorry to hear the news that my beloved fish had burned down. I hope no-one was hurt. I have used the restaurant since moving to Oxford in 1995 and have always been more than satisfied with the service, friendly staff and the portions. In my pinion the best place to eat in Oxfordshire.

steve m 26 Feb 2012
I've been going to Posh fish for years now, I don't get there too often as it's some distance from where I live, but it is worth making the journey. In my opinion this is the best fish and chip restaurant in Oxfordshire, always big portions, freshly cooked, and cooked well too. I went there today and wasn't disappointed, it is consistently good, I've never had a bad meal there. Staff are always friendly too. Well done to everyone at Posh Fish.
Bert 27 Dec 2011
The first time I went to Posh Fish they gave me a kebab the size of a baby. I didn"t know whether to eat it or have it christened. This is Headington's gift to Cardiology; indeed with the JR only a three minute ambulance ride away, you'd be crazy not to try it.
HB 27 Feb 2011
The best thing in the world is when you pay £1.30 and for that you get them to SHOVEL chips into a very generous bag!!! Very nice staff and gr8 food - LOVE IT !!! :D!!!
Faisal 4 Dec 2009
Like most fish shops these days it is batter, batter, batter. There must be a fish in there. Ever wondered why these shops never ask if you want your fish grilled?
Splash 20 Apr 2009
I found this place on the Daily Info and as I am staying in the Headington area I thought I would give it a go! All the reviewers are right - the portions are huge. I have eaten in the restaurant at the back and have struggled to finish the plate of fish and chips. There is almost enough for two people. Even the portion of curry sauce is enormous. I really don't know how they do it for the price. The portions at the take-away part look huge as well - I have never seen chips being put in large paper bags before! If you are looking fo a tasty filling meal that won't make you wince when you get the bill go to Posh Fish!
David J 28 Oct 2008
Great food, big portions, friendly staff!
SKA 10 Apr 2008
good portions of chips and nice, but too much batter so it was spongy on the inside...shame.
littlefishy 9 Nov 2007
My husband and I, along with his family have gone to Posh Fish for ages! Great food, nicely presented and LARGE portion of chips! The fish is fresh and you are served a hearty portion!


EXCELLENT!!!!
Mary Aris 9 Aug 2007
Amazing food, ridiculously generous portion sizes (as my partner puts it, if you order large chips, it's served in a bag the size that other fish and chip shops give you to carry your family's order in) at fabulous prices!

A very satisfying take-away experience or sit-down meal (although the restaurant part is often filled to capacity, reflecting the queue that can extend out the doorway).

Miri 15 Nov 2006
I first noticed the well presented shop, compared to other fish and shops I'd seen recently. A bit more than I've paid before, but quite a surprise when I saw the serving size being given to me. I should have ordered one serving for the two of us!

Only downside was the excess of batter, but high quality otherwise.