Famous among and much loved by students, especially those from the Turl and Broad street colleges. Their falafel wraps never fail to please! 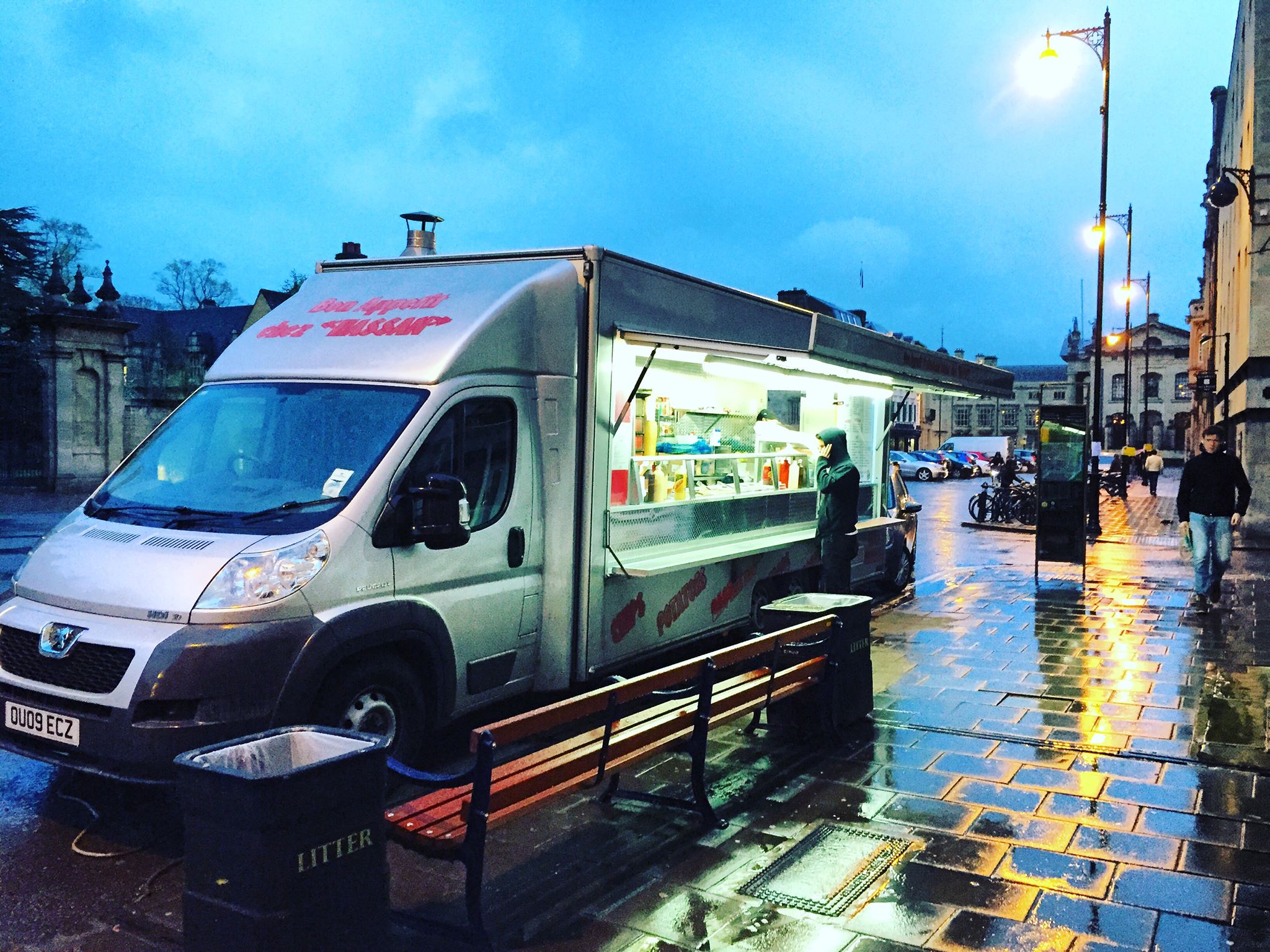 lizzp 12 Apr 2013
I went to hassans over weekend, and I have never tasted such lovely food in all my life. The chicken was fantastic with lovely sauce. There was every kind of sauce you could want, the mayo was thick and creamy and the falafel was to die for. I strongly recommed this kebab van: very clean and friendly.
simon 2 Nov 2010
The guys at Chez Hassans are nice and the van is really stylish but I felt some of the food didn't represent that. I tried the chicken kebab which I felt was marinated so much that I couldn't taste the actual chicken, but the salad was really nice and fresh.

The sauces were ok: a bit light instead of thick unlike some other vans. Alright if you're not sober, but otherwise potentially a bit of a disappointment. The kebab was nice though!
15 Oct 2010
Doner is never a good idea, but neither is 10 pints of Stella and a fight. All part of the fun I guess. This is a kebab van to frequent when sober, as well as when wasted. One of my friends bought chips cheese and gravy, looked horrid but tasted lovely and was piping hot and of reasonable proportions- not too small, but not over-bearing. The single biggest bargain is the falafel and salad naan. It is £2- criminally cheap; truly tasty and fresh by anyone's standard. If it was served on a plate in a restaurant, you wouldn't flinch at £7. It is also worth noting that the van is very smart and shiny. The guys on board are all friendly and work cleanly and professionally, as the name would suggest.... Professional cuisine, chez Hassan.
Food Boy 20 Jul 2010
I went to Hassan's this weekend and I have to say I was disappointed :( I WAS a regular at the tastalicious kebab van but since coming back to study, I've found that the prices have gone up and the food does not reflect this I'm afraid - dry and a bit tight on the portions! If you're on a drunken night out and just want to soak up the beer then fair enough...overall, wicked-looking van, very stylish - but the food isn't what I was hoping for expecting :( Hope this helps - happy munching, Merry Xmas!
steve 6 Dec 2009
Although my kebab days are mostly behind me, I still occasionally make an exception for Hassan's - partly out of nostalgia, and partly because the chips, cheese & chicken is still very reliable and filling. Most of what I wrote in the review below still rings true - although prices have risen by about 20%, to a still-reasonable £3.20 for the chips/cheese/chicken.

One extra thing to report - the onion rings are delicious, cheap and numerous, highly recommended. And they now have mint sauce *and* mint mayonnaise, ideal in case your doner needs an extra dose of saturated fats!
exocoetidus 27 Jan 2009
One of the long-standing city centre vans, Hassans tends towards gown rather than town, since its location is more convenient for colleges than for clubs, buses or taxis. Broad St provides a moment's respite from the crowds of Cornmarket, George St, and St Giles, as well as convenient and relatively secluded benches to consume your fodder upon.

Hassan is a friendly chap, and his food is generally good. The chicken has a decent marinade and good texture, doner is (as usual) unwholesome but tasty, and – probably most importantly – the chips are invariably well-cooked and appetising. Don't consider trying to finish them the following morning though – that which was previously crisp and appealing will now be sad and soggy in a little puddle of grease.

Salad seems fresh, featuring token slices of tomato and cucumber, and the sauces have decent taste and consistency. Chilli sauce is good and hot, and not too runny.

Part of the enduring appeal of Hassans is the prices – recommended is £2.50 for a generous dose of chips, cheese and chicken. Pick your fare carefully, though. They specialise in the popular stuff to the slight detriment of more obscure items – the hot dogs aren't great, nor is there anything very special for the vegetarian (baked potatoes have been known to be a little grey). If you want gastronomic variety, McCoy's or Houssain's will do you better; but if you're just looking for a large and tasty dose of protein and carbohydrate for your last 3 quid, Hassan's is a fine choice.