Kebab stalwart on the High Street.

Traditional kebab van. Rumoured to have fed a Univ College student kebabs through his window, which looked out onto the van. The student spent a year unable to resist the smell of tasty fried food and Ahmed was most obliging, saving the student a round trip of approximately 400 yards (360 metres). You can now buy branded Ahmed's jumpers - don't miss out! Well deserved winners of the Best Kebab Van award at the British Kebab Awards 2019! 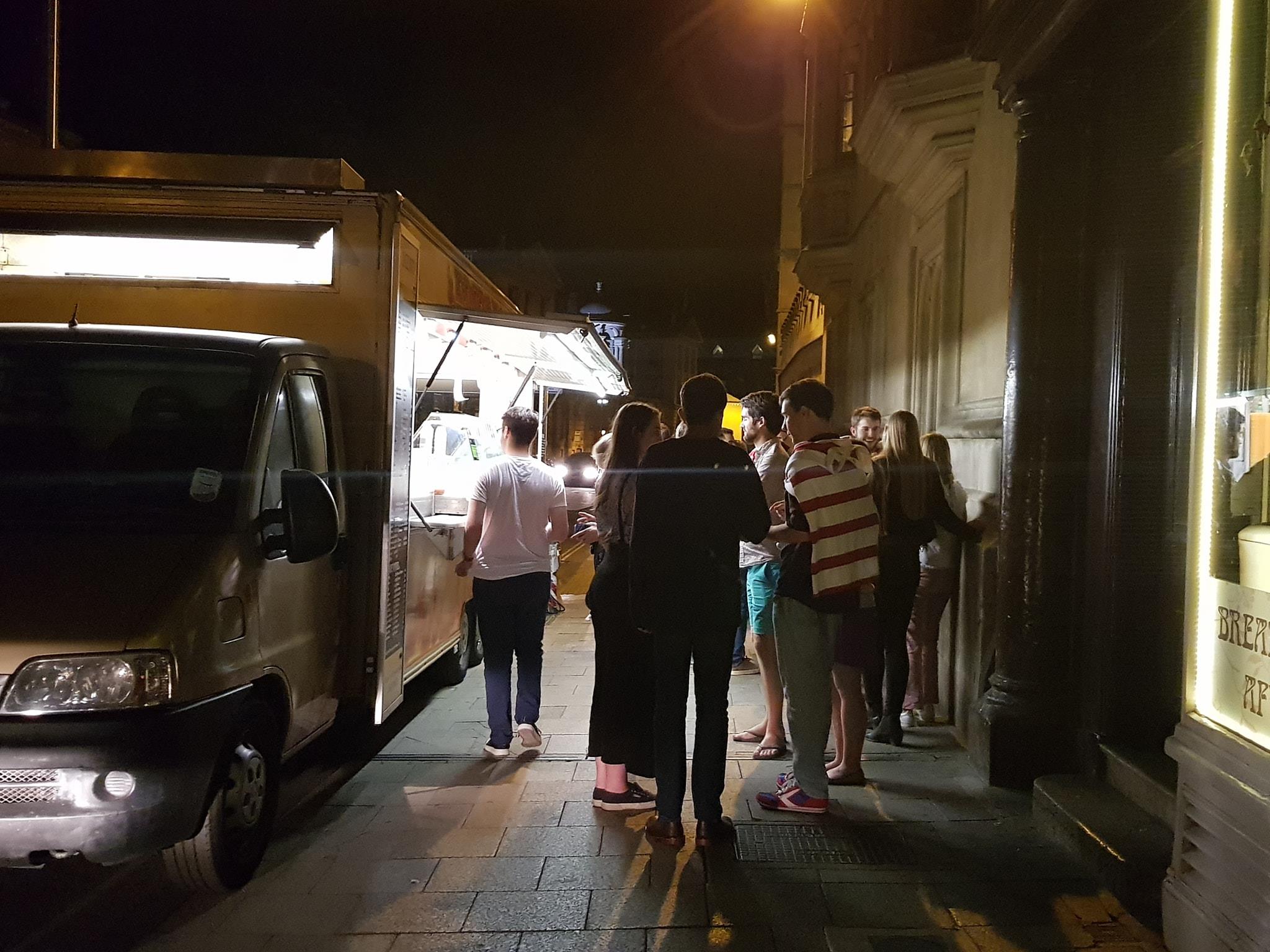 Wow! What a van, if indeed it should be called a van - more apt would be a mobile restaurant! Sooo much choice! Where else could you indulge in the tastiest kebabs and burgers (that actually look like they do on the menu)? Golden crispy chips,that are not soggy; an assortment of tasty traditional halal meat dishes and as if that wasn't enough to satisfy your palate, then how about good old fish & chips or hand-made pizzas cooked in an oven (they don't go near a microwave, I'm pleased to say). If you fancy washing this all down with a nice cup of tea or other hot beverage then stick around as Ahmed's never too busy to indulge you. Pudding perhaps? No problem with at least seven flavours of icecream - yum! Ahmeds' piece de resistance? Five star hygiene rating and served by the nicest people you could hope to meet

Rachel F1 19 Jun 2013
Unfortunately Ahmed's has been dropping not only in quality of food, but also in value for money.
Very little donner meat, laced in sauce and packed out with salad. However the service is second to none.

Khan 24 Nov 2011
Ahmed's Bar-B-Q is the absolute best late night 'establishment" in Oxford. The service is wonderful and so personal, and the food is prepared with great care. I would recommend it to anyone who finds eating to be necessary at any point in their life.
Stephen 13 Feb 2010
Ahmads Kebab Van is the best in town. I go there every Saturday night. He is awesome, the food is excellent with the best chips free and the meat is nice.
faz 17 May 2009
Ahmed's is well situated on the High Street, ideal for those journeys to and from town. It is quite a large van and very well staffed, and service was certainly quick and efficient; you can expect no hassle from uncooperative drunks. Here you get the impression that they might actually be able to provide everything on the usual enormous menu just as quickly as the usual staples: kebabs and chips. Unfortunately, however, the kebab with which I was served was not up to the standard of the service.

I think it is not unfair of me to suggest that a key component of the myriad flavours one can expect to receive from a Doner Kebab should be lamb (or at least some kind of meat...). This was not the case. The pitta was filled with slivers of grey "stuff" which tasted of nothing and were coated in too much, too greasy sauce and heaped with salad, preventing them from even making any contribution to the texture. Now, I don't think I'm an unfair person, and I could have forgiven them this had the salad actually been good, or the pitta of exemplary quality, but they weren't. The salad seemed to be just providing bulk and texture and what flavour there was from it was completely eradicated by the sauce – which tasted only of grease and perhaps a drop of tomato. The pitta wasn't up to much either, but it did manage to raise itself above the usual cold and soggy standard by actually being warm, though it was still soggy...

On the whole the Kebab wasn't up to much, but one shouldn't judge such an efficient establishment solely on this one item. Based on what I saw I have every confidence that the staff will be able to provide you with any of the things on the large menu promptly and cooked to an at least edible standard. There are certainly much worse vans out there, Ahmed's was actually clean. I suggest you try something other than the Doner, but let's be honest, when you are staggering home down the High Street at one in the morning you're not going to care if the sauce is too greasy or the meats flavourless. All you want is fast, edible food and this, at least, Ahmed's can provide.

Here’s one we nearly did earlier. However, last time we made two mistakes: both of us had too much chilli sauce. Having received an e-mailed admonishment for not saying anything about the more palatable aspects of Ahmed’s, we decided to go back and take a slightly more cautious approach.

The first thing you notice about the van is the extensive menu. There is enough here to keep even the most avid reader awake all night. In fact, Ahmed himself seems to stay awake all night, with his van being one of the last still plying its trade until the small hours.

Ahmed’s is very good on sauce... that is to say, if you ask for just a little chilli, you will probably find it the best in Oxford. In fact, if you ask for the aioli, they will offer you some chilli with it. Presumably they realise that the chilli is one of their strong points, and frankly, the aioli isn’t. It has a cumulative effect, not giving you the full garlic flavour all at once. Other sauces include ’000 island and mint.

The portions are not the biggest (price against mass) in Oxford, and even an extra large can leave you feeling somehow unsatisfied; also the pitta is dry and chewy. However, the meat is good, though the chicken isn’t what it used to be, and the salad is of prime quality. If you can be bothered (or you are in an ‘impressionable’ state of mind), go to Mehdi’s, get a kebab and carry it over to Ahmed’s for the chilli sauce.

Special Veggie Kebab - £2.20 (with egg and cheese or fried mushrooms)

Also available: tuna kebabs, hot dogs, chips, baguettes, spuds with a huge range of fillings (including cheese, kebab meat and salad all at once in the ‘Special’)