Fried chicken in all its glory

Like KFC, only different, and (we're assured) better! Whatever strange images the name conjures up, this is a palace for all things chickeny. There are discounts for students and local businesses, free home delivery if you're feeling lazy, and free wifi if you make it in to the shop. 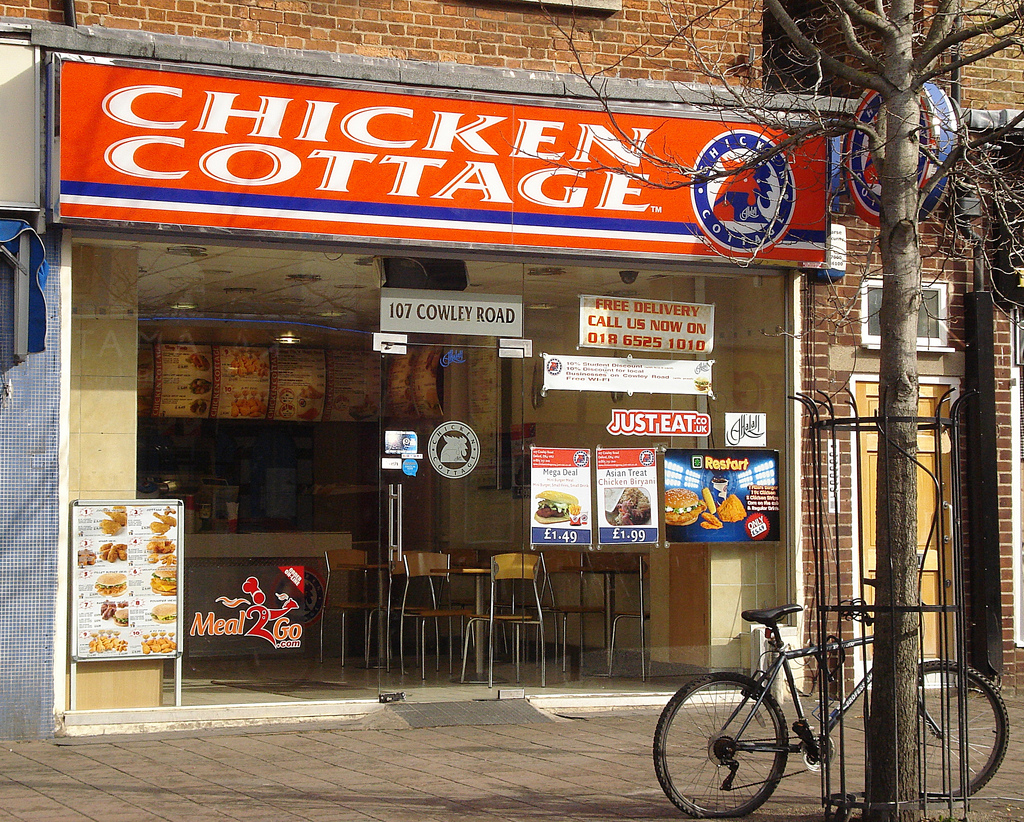 I have often passed Chicken Cottage on the , dismissing it as an amusingly named KFC-knockoff. Now I have visited, I can confirm that this is indeed the case; however, it doesn't taste bad at all.

As I entered the joint all the workers were behind the scenes in the kitchen, leaving me to survey the interior of this cottage for chickens. The decor was sparse and shabby (but not in a shabby-chic kind of way), with the menu shoddily taped to the counter, and wonky menu screens which are clearly just wall-mounted televisions. That said, it was by no means unclean; just not necessarily welcoming. The look of the place could be summed up by the half-empty Coca-Cola branded fridge containing only Pepsi.

However, I am not a believer in judging a book by its cover, nor chicken by its cottage, so when the friendly (if unenthusiastic) server greeted me I eagerly ordered my spicy chicken wrap with fries and a drink. The food didn't take long and soon I was sat down on the long bar which runs down the left side of the shop. The atmosphere inside was quiet, even a little awkward; I can't help but imagine the shop becomes a lot more lively later in the day.

The fries, which were made fresh, were warm and crispy, if a little bland (some salt, which was provided, soon remedied that). The wrap itself was, while thin, very long and packed to the brim with filling. The chicken was at a great ratio to the vegetables, which seemed very fresh. The spicy sauce was at a good level of heat; it didn't blow me away but it certainly had a kick. The amount of sauce was perfect too; enough to taste, but not so much as to overpower the chicken. The chicken was nice and succulent, and while I expected a poor KFC imitation, the taste of the chicken's breadcrumbs held its own with a distinct, more mild flavour.

The price was very reasonable, at only marginally more than your average meal-deal; it's definitely an upgrade (in taste, if not in healthiness) as a quick lunch on the go. All in all, while Chicken Cottage won't be winning any interior design awards, it provides a well-priced, good-tasting alternative to the other high-street chicken shops.

The chicken wings here are usually very fresh and delicious (tasting as good as the KFC wings as described below in some reviews - which I totally agree with). For that reason I have always returned to chicken cottage just for the tasty chicken.

However, I haven't been to chicken cottage in years and decided to order over £8 worth of chicken wings. It is sad to say that with the chicken wings that I ordered, the taste had gone and seemed very old. They tasted nothing like it used to.

The hair was not properly plucked out from the wings and it just all tasted a disaster. Very disappointing for fast food with such high standard.

It is tragic to say I will be making my next order somewhere else now.

Chicken Cottage has been taken over! New management has provided incredible results! I will be the first to admit I was not a huge fan of Chicken Cottage. A few bad incidents made me assume that there was no hope for the chicken shop on Cowley Road. But alas, it's all change.

I ordered from there on a whim a few days ago only to receive the tastiest, hottest, most generous meals I've EVER ordered from a take out! The chicken is delicious, not greasy, and perfectly cooked. Succulent and tasty from start to finish. The burgers are fresh and moreish! The hot wings could open a shop in their own right - they are fantastic! Enjoy all of this with an indulgent dessert, some ice cream, cheesecake. It's the best value place on Cowley Road!

Chicken Cottage has made an amazing turnaround - don't take my word for it - get down there and enjoy some piping hot chicken!

Unlike KFC (probably to keep waste to a minimum) the food is usually cooked to order. This means everything is fresh tasting and reasonably textured (no dry chicken bones here). The various offers are usually exceptional value, and they now serve fish & chips and fish baps (both under £5) which are pretty hard to find on the lower Cowley Road.

Usually happy (or more than happy) to offer a canned drink instead of the syrup stuff from the taps on meal deals. The staff are friendly and the service efficient - though the waiting time can be a little longer than other similar places.

The food (meat is all halal) is pleasant. Nothing particularly more, nothing terribly less.

I have been eating here for a while, usually 2 times a week.

The food to really tasty and the service is good - you can get chicken and chips for £2.

The chicken wings are nice.

There are some seats - but you can't reserve a table or anything like that.

Mike 28 May 2012
It's not like KFC because its cheaper and tastes better. The fried chicken is flavourful, not too greasy, and really fresh. Go to the cottage of fried chicken love! Best fried chicken I've had in Oxford thus far.
Ando 23 Jul 2009
I order from here and the food is quality and the place is clean. The people who work there are also friendly. 7/10
Customer 1 Mar 2009
Like the Daily Info blurb says, Chicken Cottage serves food very similar to KFC. However, it does what it does very well. The fried chicken tastes fresh, normally the meat is succulent and the batter is crispy. The BBQ wings are also nice, the BBQ sauce they use is really sticky and sweet. The place is always clean and the service has always been good in my experience. Overall, it isn't unique, but it is one of the better takeways on Cowley road, serving tasty no-nonsense fried chicken at a cheaper price than KFC.
Nick L 1 Jul 2008
Review this venue