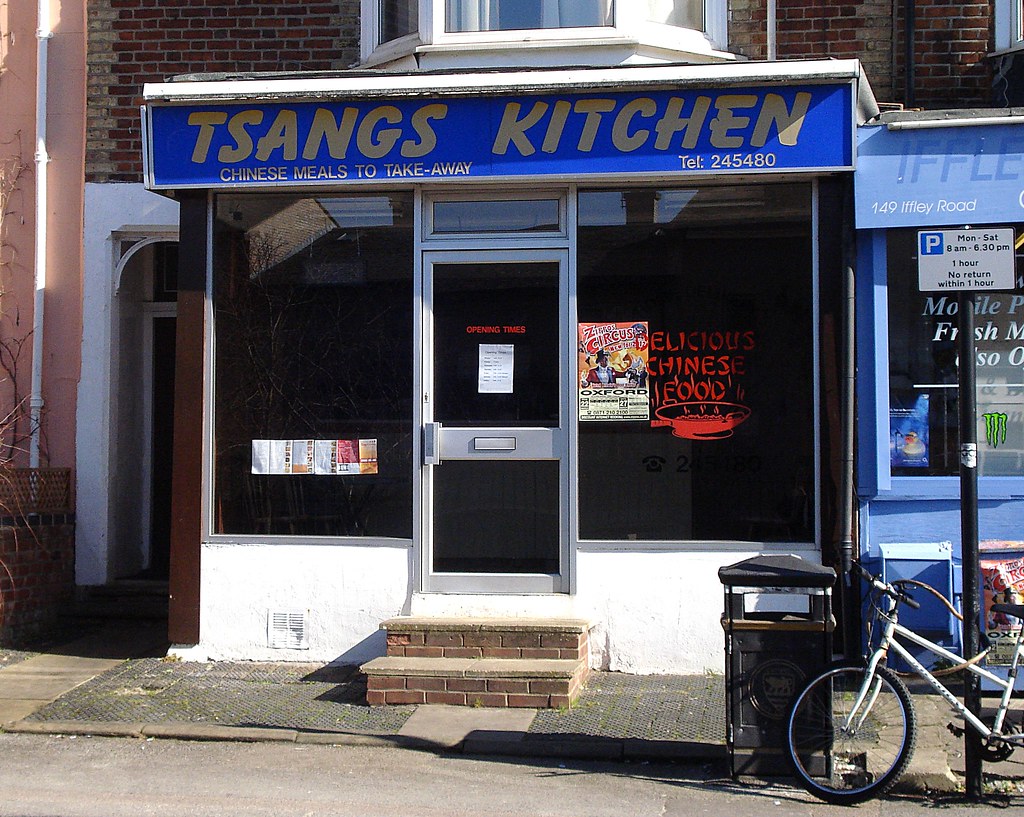 Tsang's Kitchen is a favourite of our house: the food is always tasty, quick and reasonably priced, with friendly staff. I have taken away from there dozens of times and always enjoy it.

I bought from Tsangs for the first time on Monday (03/03/14) evening. I couldn't fault the meal, it was the best chinese meal I have had in a long time. The quality of meal was good; no questionable meat, and large portions. Staff were friendly and helpful. Delivered within an acceptable time. I will definitely be back for more

Tsangs is a good Chinese, with good quality, tasty food. Also I have to say the portions they give you are very, very generous and will be more than enough to go around. You really do get your money's worth. Also the delivery service is good, reliable and fair priced. If you do order from Tsangs you will not be disappointed. It's definitely one of the best in Oxford.

Love this Chinese take away - they are very generous and very cheap compared to a lot of the takeaways in Oxford, they deliver anywhere in Oxford, not just Cowley. I would highly recomed their garlic chicken pieces and garlic prawns, they are beautifully cooked!

Sophie 13 May 2012
Tsang's is a nice family business that serves generous portions of well-cooked, pleasant, Chinese take-away. I went there on the 21st Jan 2012 (and once or twice last summer) and enjoyed a very generous 'Special fried rice', and, to spoil myself, a starter of garlic chilli chicken balls. This was about £8 together, so a good price. It was lovely, and I was able to put some rice and meat away to microwave the next day.

I don't think (as far as I know, not being Chinese) it could be classed as fine oriental dining, but it doesn't claim to be. I would recommend it to anyone looking for a tasty take-away from people who run an honest business.

Stx42 22 Jan 2012
I recently tried Tsang's Kitchen because my friends recommended it for some time. I ordered a delivery over the phone.The food arrived within the estimated time. As I dished up the food the aroma quickly attracted everyone into the kitchen. My order was chilli garlic king prawns, chicken curry, sweet and sour chicken, singapore noodles and house special fried rice. I thought the king prawns were fantastic,'crispy','light' and 'spicy'.The curry was full of flavour, very good! The sweet and sour sauce was just right not too sweet and not too sour. Singapore noodle were well spiced with fresh chillies and the special rice equally good. Overall I am a very satified customer and highly recommend it to anyone.
Mel H 18 Aug 2010
Yes, generally speaking "serviceable" and "reliable" are appropriate words to describe Tsang's, but really nothing special.
I was a little taken aback when I asked to have sauce on the side and was told "no; it's all mixed in together." This is not an outrageous request, and at the very least I would have liked the gentleman at the counter to ask the cook rather than deciding that my business was not worth the effort. Hungry and resigned, I asked for the lightest option and was directed to Thai stir-fry, which I was told was just vegetables stir-fried in chilis. I repeated, "just chilis, yes?" and he affirmed it, but when I got home I found a sticky-sweet syrup with chilis floating in it.
If the food were spectacular, Tsang's could get away with just not caring in the least about accommodating customers. Alas, it's not, and they can't. I won't bother again.
21 Mar 2010
'Tsang's Kitchen' is a lovely, family-run business (which has a partner outlet in Johnstone, Scotland). The proprietor, Keith Tsang, is always friendly and charismatic. The charming wood panelling and post-colonial decor really provide an authentic Nanjing experience. The numerous dishes on the extensive menu offer real diversity and the portions are really numerous.
Alex Rowe 31 Jan 2010
I tried out Tsang's Kitchen as part of my ongoing mission to identify the single greatest oxford chinese takeaway.

Delivery was swift at just over 30 minutes, and their prices are competitive.

The hong kong style sweet and sour chicken was crunchier than I'm used to, with a sauce that wasn't as heavily coloured as they can sometimes be, and leaning towards the 'sour' end of the spectrum.

The singapore noodles contained some chopped fresh chilli, which certainly packs a punch. Flavours in the noodles and rice were good, with a decent helping of meat and veg. The rice was maybe slightly oilier than most, although still very good.

Overall the ingredients seemed to be of a decent quality, and the food was well-prepared. You could certainly do worse than Tsang's Kitchen.

8/10
Simon 29 Jul 2009
Tsang Kitchen is proving a very reliable chinese delivery service. 2 large noodle dishes, a bag of prawn crackers, mini vegetable spring rolls and a hot and sour soup arrived in less than half an hour and cost £14.

The noodles were nicely-textured and tasty with plentiful juicy prawns. Singapore noodles were pleasingly spicy. Hot and sour soup was hot and extremely sour - in fact sourer than I've ever had it. It did however contain a large quantity of prawns, chicken, pork, etc - more a stew than a soup. Prawn crackers were fine and numerous, while the mini spring rolls were average and numerous. All surprisingly hot and remarkable at the price.

mr marinade 7 Dec 2006
We ordered a delivery from Tsang Kitchen last night: veggie spring rolls and king prawns with sweet and sour sauce, and crispy seaweed. The delivery was very quick (about 10 minutes from the Iffley Road to St Clements) and the food was piping hot and crisp, though the prawn batter was rather heavy. The texture of the spring rolls was great, but the interior was a bit of an undistinguishable mush. The sauce was fairly synthetic yet the seaweed was everything that crispy seaweed should be: crackling, tender, salty and abundant. In fact, all the portions were generous. The total, including delivery and a portion of plain rice, was £11.40.

We'd use them again because of the price, portion size, service and lack of greasiness. We wouldn't take our parents there because the flavours are not particularly exciting.
Minnie the Muncher 1 Dec 2006
Review this venue