Cooperative enterprise that aims to address social inequality, create a healthier environment, and strengthen the culture of bicycling in Oxfordshire by teaching people from all backgrounds to become self-sufficient and proficient in bicycle maintenance and riding. Offering workshops and mechanics courses, bike-related events. Housed within the courtyard of the Story Museum, it's a really nice venue as well as a welcoming and enterprising place. Get there early to bag your workshop space for the day (or as long as you need). They supply tools and expertise (and patience!), and some bits. Different charges apply for the bits (some free). £7 per session (as much of the day as you use). 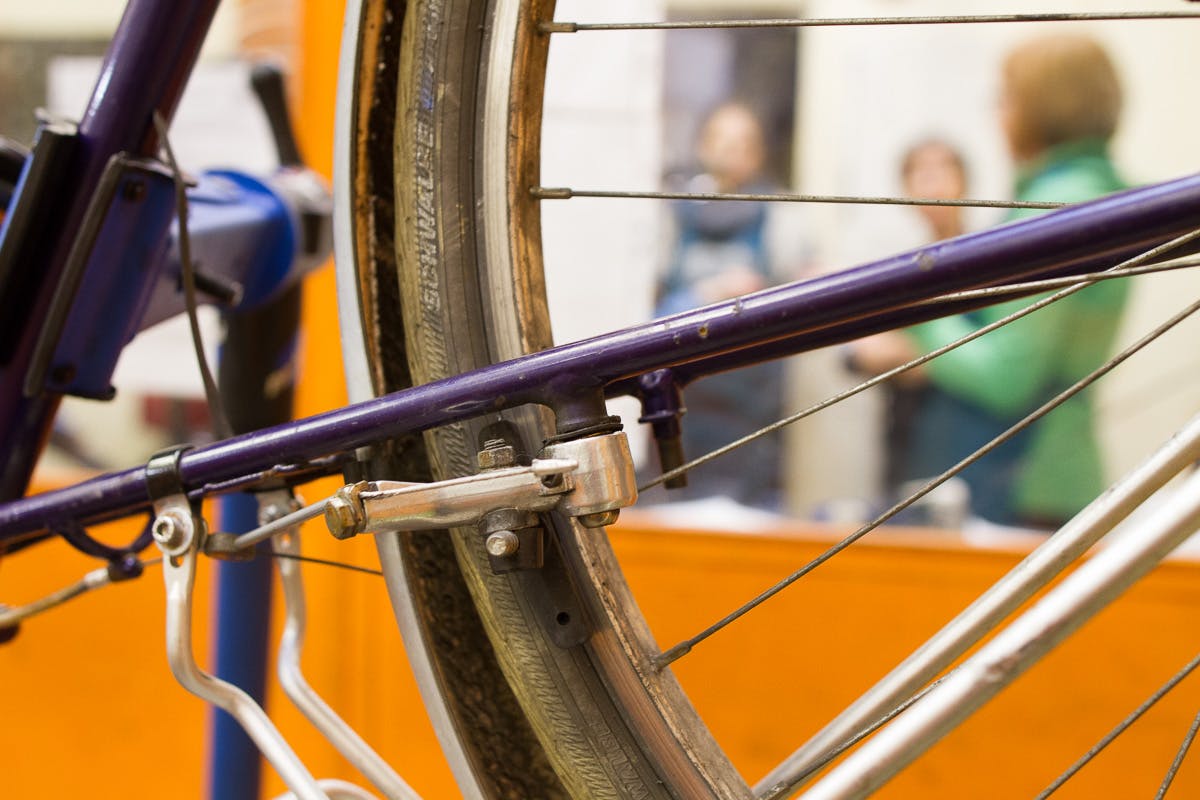 The saga of my bike has been long, a strenuous mountain path strewn with boulders, landslides and mountain lions. Every traffic light would present a choice between stopping (and therefore starting again, risking gears falling off and certain death) or blasting straight through lines of oncoming lorries. Every hill seemed like Everest, the polka-dot jersey would never be mine. Every creak and snap emanating from between my legs sounded like thunderclaps. Six months I braved this torment, six months of being afraid of the sight of two wheels. And then I visited the Broken Spoke Bike Coop.

Housed in the courtyard of the Story Museum, Broken Spoke exist to promote cycling culture in Oxford, ditching smelly cars and putting people on bikes to get active and moving. Broken Spoke are not a normal bike shop or a repair centre, they run as a not-for-profit cooperative centred around their staff, volunteers and bike lovers everywhere. They run lots of bike-related classes teaching repairs, riding skills and bike maintenance, but the main feature is the weekend drop-in sessions. Run as an open workshop, anyone is welcome to go in and pay a small fee to have use of the space and every tool imaginable. Expert help is on hand from the mechanics and volunteers but the emphasis is placed on teaching skills; rather than getting your bike fixed, you fix it yourself.

My bike had been reduced to barely usable. Only the bottom 5 gears still functioned (out of 21) meaning that trying to get above walking pace required Herculean effort. Not good. Within two minutes of getting into the workshop and sticking an apron on, helpful Dave had the back wheel off and was not impressed. His demoralising tuts confirmed the worst, the entire back axle had snapped in two. The insides of the wheel lay strewn about me. The bike was dead, all was lost. But no! Broken Spoke know their stuff and told me there was still hope; never put a healthy bike down. With Dave's instruction I replaced the axle, the rear cassette, the chain and the gear shifter using new parts and second hand bits from around the shop. My inexperience and my dodgy wheel meant that it all took about 4 hours, with extra help from Tim and Hannah, but the end result was a bright and shiny bike that goes much faster. It took so long that the guys even stayed open late to help me out, making sure my spokes were no longer broken.

The whole thing was a lot of fun, saving me a lot of money (you pay very cheap prices for parts only, so the entire thing only cost me £30) and giving me some new skills. Although the job was good enough that I have no need to go back, the friendly staff and volunteers, and the satisfaction of fixing something (and making good use of a Sunday afternoon), have made me hope that something breaks again soon.

Broken Spoke's top tip: After tearing my gloves off in a fit of frustration (bike maintenance gets pretty intense) my hands ended up covered in grease, making me feel very tough but looking like a naughty child. Instead of using grease soap, Broken Spoke reuse coffee grounds to get grease and oil off, it works a treat.