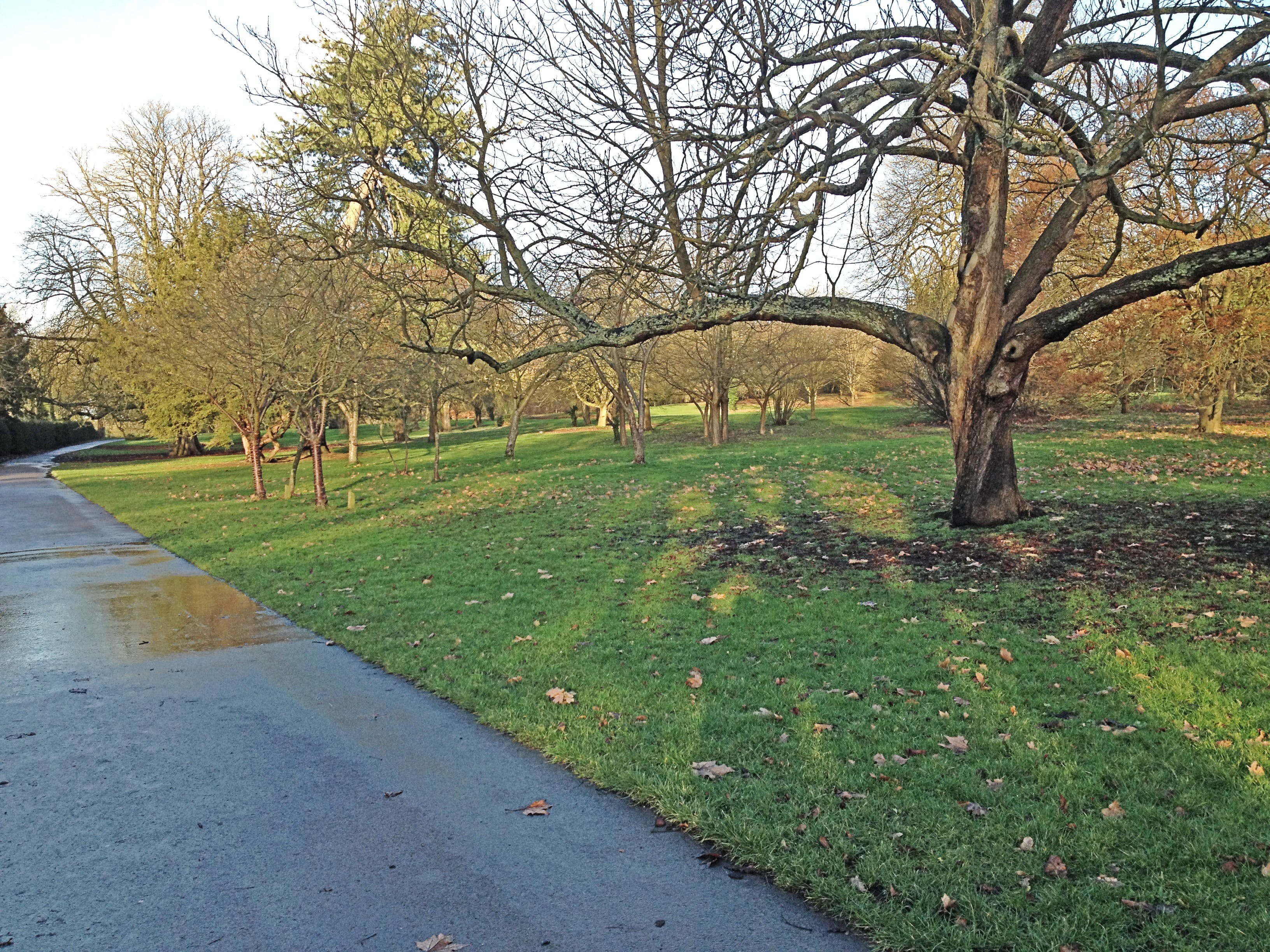 In the spring, this is a splendid spot to find carpets of crocuses and snowdrops. Sometimes you even get sunshine. If you want one of our lovely A2 Year Planners in order to keep track of the Equinoxes, let us know - they can be posted to you free of charge! 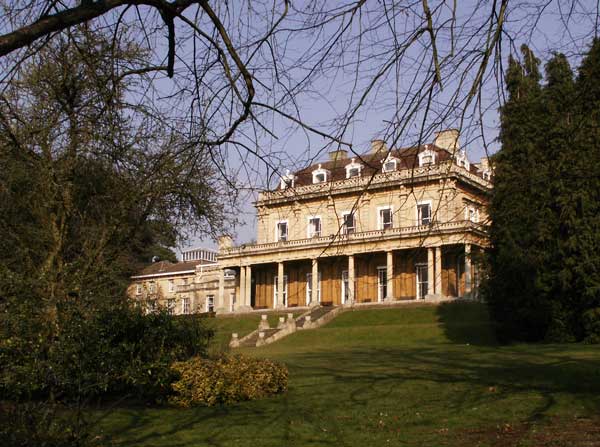 There's a rather splendid mansion to peer at, built for the Morrell family in 1824. It's called Headington Hill Hall and you can read more about its history here. It's now owned by the Oxford City Council, and is leased to Oxford Brookes University (previous incumbents include Robert Maxwell). You can now occasionally go there to attend musical performances by Brookes students.

Thus, Headington Hill Park, because it was once a private garden, has a frequency of remarkable trees uncommon in state-owned parks. You can come across several kinds of funny buds, unusual shrubs, and really lovely flowers. Of these trees, a particularly gorgeous one stands halfway up the path if you take a sharp right when you enter the park from the London Road. It looks like a Christmas present wrapped in shiny stripes of chocolate and caramel (more distinct and satiny than in the picture), and if you stand so that the tree's silhouetted against the sun the strips of bark glow in the sun like flames. Our proprietor is happy to offer a box of chocolates to the first person to correctly identify the tree and tell her where one could be purchased. 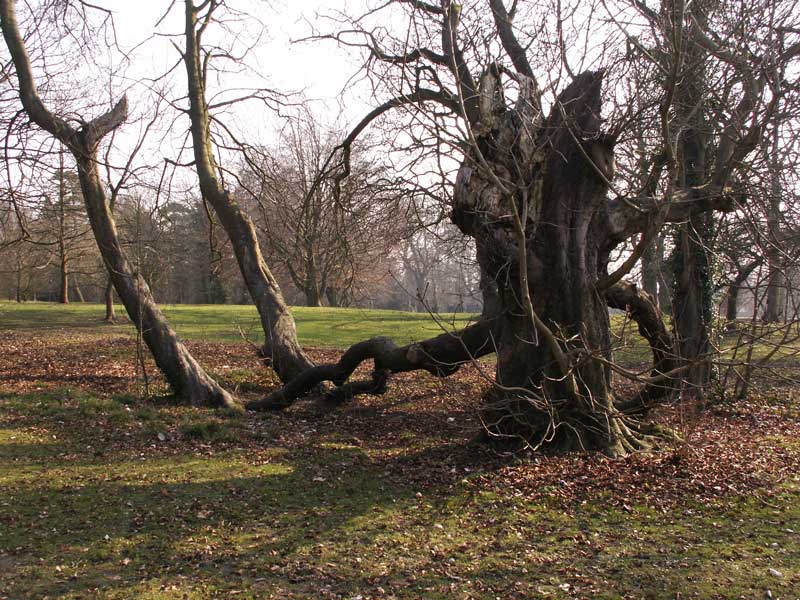 One of the most exciting trees in the park is this one near the turn-off towards the Marston Road exit: at some point in the distant past it appears to have been struck by lightning. Not to be beaten, it re-rooted three branches which are now tall and sturdy trees in their own right, all still plugged in to the motherlode, as it were.

Through the trees, you can observe views of the new Islamic Institute - one of the most beautiful buildings to have been put up in Oxford recently. 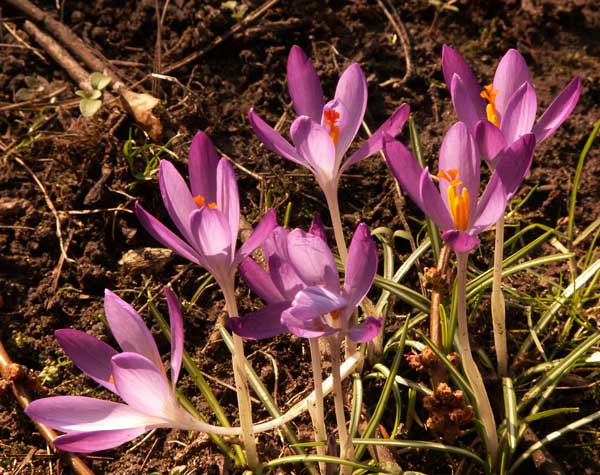 If you want to get from East Oxford to the town centre, Marston or Jericho, you could do worse than go across three parks. From the Cowley Road, go up to the Cross Street entrance of South Park, and head north to the London Road exit (halfway up the slope). Cross straight over London Road and go into the London Road gate of Headington Hill Park. Head straight on until you see this path on your left. Go down it, out of the gate, across Marston Road and in at this gate. 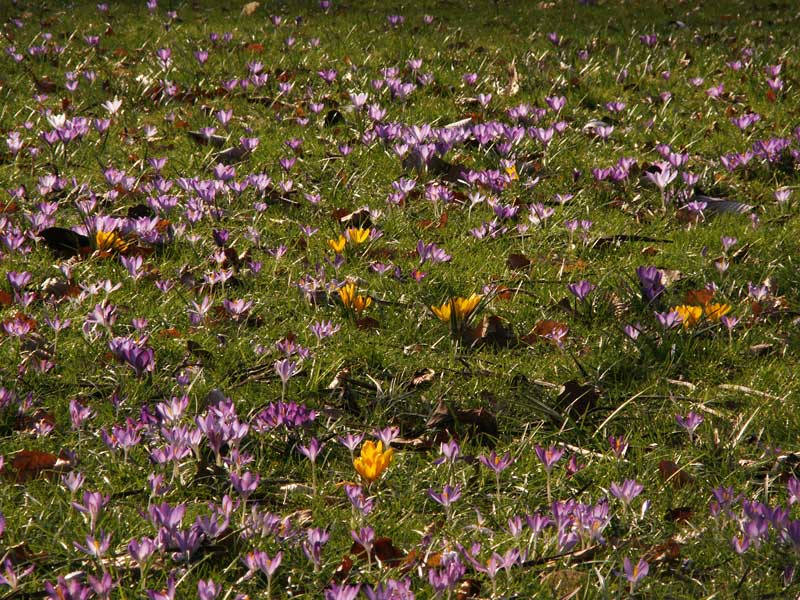 This will take you (via Mesopotamia - a concrete path between two rivers) to the University Parks and thence to your destination, almost entirely in lovely verdant surroundings. As you walk towards Mesopotamia you will pass the Islamic Institute and may get to see the white doves who appear to live round this side of the building. NB - Mesopotamia closes at dusk and bikes are not allowed.

There are some interesting patterns in the tree bark at end of the park nearest the Brookes Headington Hill campus (also some more snowdrops). Someone has written various positive words in spray paint on trees ("Love", mainly). While it's debatable whether this actually improves the look of the trees, it's preferable to the sentiments expressed in the grafitti on the seats in South Park (entertaining though some of the spelling of the latter undoubtedly is - look out for the threats about coming after someone with a "riffle").

Easily accessible from the Cowley and Iffley Roads and St Clements, this bijou park offers a chance for the harrassed office worker to get close to wildlife in a lunchbreak. If you walk along the lowest edge of the park, you can often meet robins and other small birds who will try to catch your eye and get bits of sandwich. You can also see squirrels scudding through trees and rifling bins. Happy wandering! Another splendid tree in this park is the Pocket Handkerchief Tree, or Dove Tree, or Davidia - originally from China. It's in flower now (late May, after the wettest April on record and during a very hot spell), and you'd be forgiven for passing it by, thinking its large white petals were simply pale leaf undersides. To find it, walk up the park along the tarmac path from Dairy Lodge (on the Headington Road side). Following the path as it curves round to the left, you'll see a grand vista of Headington Hill Hall on your right through bushes and an iron fence. On your left will be a smallish, spindly-looking tree with all of its branches extending out on one side only. On the ground beneath are currently scattered lots of the large white fleshy petals that give the tree its name. Doesn't sound like much - but it's pretty weird when you've never seen one before! And worth knowing about if you're caught short in the Park without a handkerchief ;)

When I was in Oxford last year (October - December 2011), I lived in a flat very close to Headington Hill Park. Reading the above description is like walking there again: I noticed the very same things and also made a picture of the exfoliating tree with the chocolate-caramel bark (www.sylviawenmackers.be/images/Blog/Fotoraadsel3_opl.jpg).

Back home, I tried to determine what kind of tree it was. Since I am not a botanist, I just relied on the internet for this. My conclusion was that it is a "Tibetan cherry" or "Birch bark cherry" (Prunus serrula). My second best guess is a "Manchurian cherry" or "Amur chokecherry" (Prunus maackii). When I tried to look for specific information about the trees in Headington Hill Park, I found the above review. It gave me a chuckle to see that the tree is mentioned in it, but not identified.

For fun, I sometimes post a close-up picture on my blog as a puzzle for the readers (www.sylviawenmackers.be/blog). Two weeks ago I posted a picture of the bark of that tree from Headington Hill Park. I have also put the puzzle online on a group blog for scientists (here). Of course, since it was a close-up, some people didn't realize that it was a tree, but there have been good guesses for different kinds of trees with a coppery and/or exfoliating bark. The best one is "Chinese red birch" (Betula albosinensis).

Today, I have posted the solution to the puzzle online (sylviawenmackers.be). It's written in Dutch, but you can try an automatic translation of it (here).

There is some more inspiration for trees with special barks here: http://luismorenolandscapes.blogspot.com/2011/01/trees-winter.html.