Set in the centre of Oxford, the family-run Cornerways Guest House provides compact rooms. Guests can reach University of Oxford within a 25-minute walk. A 20-minute walk to the centre of Oxford. Guests at Cornerways Guest House are accommodated in rooms with complimentary Wi-Fi, heating, flat-screen television, a trouser press and a separate toilet. For more comfort a shower, a hairdryer and free toiletries are provided. Start your day with an award-winning breakfast served at the garden. 15 minutes drive will take guests to RAF airport. The conveniences such as a free private car park and a luggage storage are offered on site. 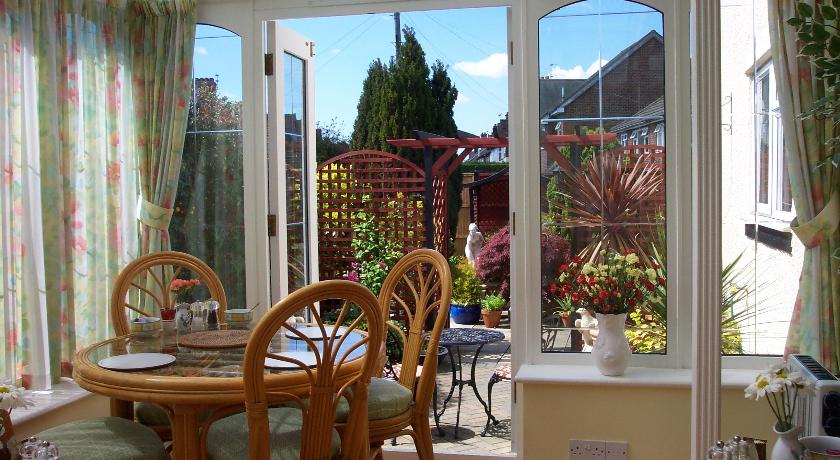 My family stayed in Cornerways Guest House in Oxford on July 1 & 2 of 2006. I had had trouble finding a place to stay that wasn't out of our price range, and hadn't found much information about this place, but had emailed back and forth with the owner and had a good feeling about it. Turns out I was right. The owner, Carol Jeakins, is very nice. She had been great to work with over email, and proved to be the same in person. She seemed to be around when we needed a question answered or a taxi called, had loads of information on how to get places, what buses to take, where to grab a cheap bite to eat, etc, but wasn't intrusive or anything like that.
We had two rooms - a double downstairs, and a triple upstairs. My husband and I stayed in the double, with my mother and teenaged daughter in the triple upstairs. The double was on the small side, but it was still quite nice I thought. It had a small but deep closet, a room that was almost filled up by the bed, but had a little room to move around in, a small bath with a shower, and a sitting nook under the window. It was unusually hot the few days we were in England - there were news reports about the extreme heat and the rise in hospital visits by those affected by it - so we needed to keep the window open, but that kept it a good temperature. The only down side was that it was a little bit noisy. The house is right on Abingdon Road, which is quite busy, but other than hearing the whoosh of tires, it wasn't particularly loud. The first night we were there was the night England lost to Portugal in the World Cup, and the neighbours, who were maybe 5 feet away from our window, were having a consolation party. With the window open, that was a kind of loud, but that was just one night. The next night was nice and quiet. Carol provides a tray with an electric tea pot, a variety of teas, coffee and hot chocolate, and some cookies, which was very nice to do, though we didn't want anything hot so we didn't actually try any of it. The small TV in the room had the usual 5 or so channels, but we didn't really spend much time in the room itself. The triple upstairs was quite large, I thought, and had big windows on two sides. There was a double bed and a single cot. The bathroom was about the same size as ours, and they also had a TV, a tray of goodies, and a sitting area. They didn't have a closet like we did, but had a wardrobe in one corner. They were in the front of the house and may have had more street noise than we did, but they seemed to sleep just fine. One thing to note is that the stairs are very steep in the house, and both my husband, who is 6' tall, and my daughter who is 5'9" had to be careful not to hit their head when going up and down.
Carol provides a breakfast in the morning, which can be your choice of a full English breakfast or a more continental style breakfast. We tried one of each. The full English breakfast was delicious and very very generous. She made us tea and coffee, gave us a glass of orange juice, our choice of a bowl of sectioned grapefruit or cereal, then a plate with a fried egg, potato cake, toast, sausage, bacon, and a tomato. She also put out toast slices, honey and jams. We were stuffed! The continental was similar - tea and coffee, juice, cereal or grapefruit, and toast and jams. That was plenty of food for us, too.
We found our stay here to be quite comfortable. The place was very clean and obviously well kept up. There was a pretty little garden off the charming breakfast nook, and we were very comfortable and felt well looked after here. It is very convenient to get into Oxford from here as well. It wasn't right down in the middle of things, but that would have probably been pretty noisy anyway, so this was perfect for us. Several buses run down Abingdon Rd which would take us to the city centre, some of which also would take you to the train station or the bus station. They run every 10 or 15 minutes, so you don't have to wait long to catch one. It cost about £1.10 for a one way trip. Taxis are easy to catch in Oxford, though you have to call for one from the B&B. They are more expensive - we took a couple of them and the cost anywhere from £5 to £7. It was worth it when we had all of our luggage or were just very tired.
We would definitely recommend this place to anyone!
Ruthless 3 Jul 2006
Review this venue