Love is Enough draws together works from public and private collections. 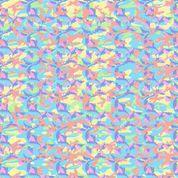 The first thing that visitors see upon entering 'Love is Enough' is a large, ornate tapestry (The Attainment of the Holy Grail , Morris and Co. 1895-6). At almost seven metres long, with all of the figures in the scene inhabiting the same visual plane in the foreground, the piece could be the fruits of detailed, Medieval craftsmanship.

And it hangs opposite an electric blue print of Jackie Kennedy.

'Love is Enough', curated by Jeremy Deller, and running at Modern Art Oxford until the 8th of March, displays the work of William Morris and Andy Warhol side-by-side. And it is, for three reasons, an absolutely brilliant exhibition.

Primarily, for the sheer range of pieces on offer.

For Warhol, as well as showcasing some of his most iconic pieces - silk-screen prints over bright acrylic backgrounds - this exhibition offers a fascinating insight into his early career. Copies of his magazine, ' Interview', nestle between some of his earliest published work - whimsical, hand-drawn illustrations for shoes. Even when it comes to the most iconic (and most commonly-reproduced) pieces, Modern Art Oxford excels, hanging multiple prints of the same silkscreen design consecutively (and so revealing the variations inherent in the printing process) .

A similar level of attention has been lavished upon William Morris. Visitors to the gallery are not just treated to samples of his textiles and wallpapers (including the Acanthus, Windrush, and Bird designs), but also to his illustrated manuscripts from the Kelmscott Press; beautiful (if illegible) typesetting surrounded by intricate mazes of vines, leaves, and berries (which you can spend so much time looking at, it doesn't really matter that the text is illegible). What really elevates Modern Art Oxford's exhibit from 'brilliant' to 'absolutely brilliant', though, is the sheer amount of paraphernalia on show. Alongside the illustrated manuscripts, MAO display the woodblocks from which the illustrations were printed. Underneath the large displays of wallpaper, it is possible to see a swatch-book from the Morris and Co. store (reminding the visitor that wallpaper was, though a work of art, ultimately a commodity, a commercial product destined for the walls of the upper-classes).

Secondly, for the fact that the exhibition is genuinely informative.

The plaques which accompany the pieces go far beyond listing the name and media of the pieces, offering explanations of the context (and manner) in which they were produced. And they're interesting. Did you know, for example, that in his shoe adverts, in order to do the calligraphy, Warhol used Letraset transfers of his mother's handwriting? Or that William Morris was a staunch socialist, which put him in a rather awkward position, since his business was founded upon the sale of luxury products to the burgeoning bourgeoisie?

The layout of the exhibit is also designed to enlighten. In the final room, which focuses on the textiles produced by Morris and Co., one can follow the process of production of a wallpaper design - from the first rough doodles on a piece of cartridge paper, through detailed sketches outlining the intended tessellation, through lino-blocks, woodcuts, and test prints, right to the finished product. The most intriguing object in the room is, perhaps, a thirty-eight metre test piece of his Acanthus wallpaper. With every repetition of the motif, an additional colour of ink is added, so demonstrating how the design accretes layer by layer.

Thirdly, for the strength of the combination.

This is a combination of artists that really makes you think. Is this a gimmick? Or are there sensible reasons to include Messrs Warhol and Morris in the same exhibition?

The answer is resoundingly the latter; there are, the exhibition explains, many pertinent similarities between Warhol and Morris. Both were prodigious collaborators, both experimented with methods of mass production, and both owned printmaking businesses.

But where the parallels (and comparisons) really start to get interesting is thinking thematically, in terms of the idea of 'repetition', and the idea of 'the factory'.

Repetition (and tesselation) are inescapable in Morris' textiles; repetition (and reproduction) were themes Warhol explored intellectually - is a reproduction of a box of tins of soup art? What does it mean if art can be (re)produced on a production line?

Similarly, whereas William Morris vehemently rejected the concept of the factory - both politically (in his recourse to socialism during a period of Industrialisation), and personally (in his veneration of medieval crafts, and his preference for organic, natural motifs) - Warhol, conversely, embraced and parodied the concept, borrowing the name for his studio space where the majority of his prints, drawings, and films were produced. Indeed, Warhol's Factory was a communal, creative space (not quite the 'dark satanic mills' of Morris' England).

So, in conclusion, Modern Art Oxford have managed to assemble an incredibly detailed, interesting, and intriguing exhibit - one that doesn't just showcase the art, but also invites the visitor to consider the lives of the artists.