Pub food with a French twist in a cosy setting. Part of the White Brasserie Company.

This lovely pub is full of cosy nooks and snugs for lazy days with a pint or two whilst their beautiful new brasserie to the rear is open all day everyday serving delicious pub fare with a Gallic twist. With all dishes cooked from scratch using the best seasonal produce you will be spoilt for choice. Whether you are popping in with the family (four-legged friends to be considered very much a part of the family too!) or celebrating an occasion, you can pull up a chair and be assured of a warm welcome from all at The Black Horse. 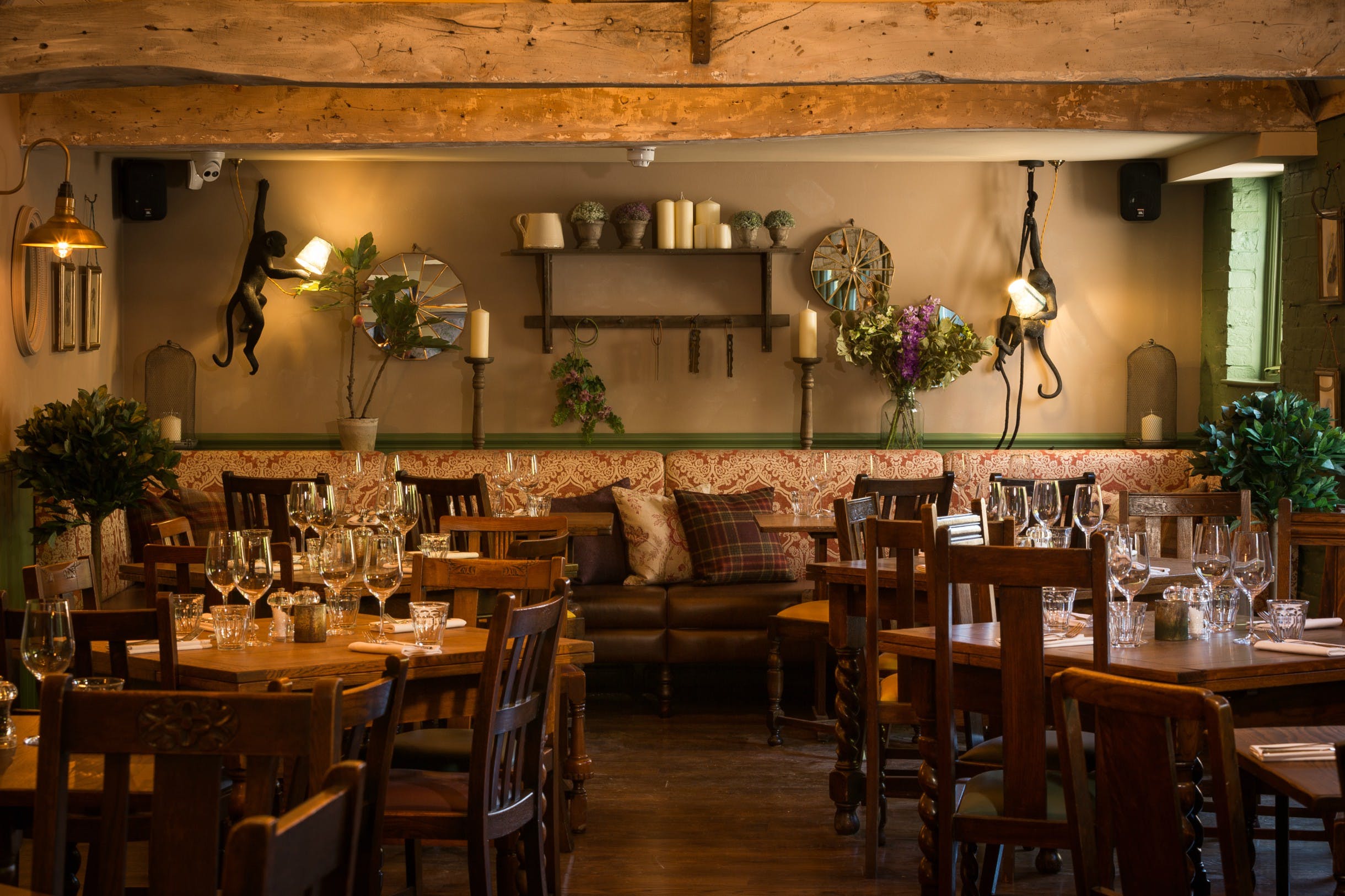 To locals, the old Black Horse was a characterful establishment; it was known for its cheap drinks and late opening hours, and with that, it held a certain reputation amongst the town folk. The recent re-development of the pub by Raymond Blanc's White Brasserie Company has created quite a buzz in Thame since its opening in December 2017 so it was time to investigate - has the Black Horse changed for the better? Short answer: absolutely!

Designer Inge Watrobski intended the Black Horse to have 'a corner for everyone'. The front of the pub/restaurant is homely, with the bar area taking on a much more welcoming feel than its previous incarnation. To the rear, the old coach house has been converted into an eating space with framed pictures of hand-drawn botanical diagrams, a bright and airy space filled with greenery in a tasteful way while remaining cosy. The only criticism we had about the decor was the bizarre wallpaper; it was as if the artist had suddenly become aware of the colonial nature of the images (e.g. Victorian white women next to giraffes, complete with Indian servant boys) and had tried to cover it up with child-like prints of palm trees. Certainly not our cup of tea but it made for an interesting talking point.

Upon our arrival we were promptly seated and were really taken care of. Our waiter Callum was fantastic; he was attentive, chatty (in a good way) and was enthusiastic about our chosen dishes in a convincing way. He even managed to talk my partner into having another drink, leaving my partner surprised and slightly horrified that Callum had succeeded when others have tried and failed in the past. The only thing Callum was missing was training in wine pairing, but his suggestion of Picpoul de Pinet was a fair choice and went well with the fish pie. After perusing the menu, I decided to be adventurous and so chose the Burgundian snails in garlic herb butter with bread. The snails were similar in texture to mussels - actually, I think I might prefer the texture of snails - and weren't at all gritty or tough. The garlic butter was amazing; I had a suspicion that they use wild garlic given the vibrant colour of the butter (especially after finding of a non-blended leaf, not resembling that of parsley) rather than the conventional bulb, and there was no skimping on the amount of butter. I wouldn't hesitate to have it again. My partner's Cheddar cheese soufflé with warm Ford Farm Coastal Cheddar sauce was silky smooth and delightful.

We didn't have to wait long for our next course to arrive. After very little persuasion from Callum, I decide to go for the 'pie of the week', a fish pie composed of fillets of salmon, smoked haddock, prawns, mushrooms and a mash potato topping, served with buttery green beans. Although deceptively simple, the pie was excellent. The potato was a glorious blend of cheesy, smooth mash piped elegantly onto of the pie and baked to form a slight crust. This was truly the mash potato one dreams about on a cold, wintry night. The amount of fish inside was great; the fillets fell apart into soft flakes, with the slices of mushroom and prawns bringing little nuggets of flavour. The chefs of the Black Horse have made me determined to raise my fish pie game. My partner's malabar fish curry certainly looked a lot more impressive than my humble pie. The enormous king prawn had part of its shell removed, meaning optimal absorption of the sauce without compromising the aesthetic appeal, and the fish was flaky and soft. The overall flavour seemed to be that of lemongrass, which was refreshing to have as the star of the show rather than as an afterthought.

On to dessert. My pistachio souffle was massive and when opened up, revealed a gorgeous bright green colour. Rather strangely, the mix between pistachios and chocolate resulted in a flavour much like sponge fingers, which made me nostalgic and very happy. My partner's chocolate torte was pleasant and quickly disappeared from his plate. The Black Horse is the ideal venue for a special occasion, say an anniversary meal for two or a special birthday with the family. The setting is upscale, the food is fantastic, the service is conscientious, and as a result, the atmosphere is relaxing. The old Black Horse is firmly dead and buried; long live the new reincarnation of the Black Horse!