The Ashmolean is owned by the University of Oxford and celebrated its 300th anniversary in 1983. It is undoubtedly one of the finest ...

The Ashmolean is owned by the University of Oxford and celebrated its 300th anniversary in 1983. It is undoubtedly one of the finest museums in the country. The nucleus of the original collection (the first of its kind in Britain) was the Cabinet of Rarities of John Tradescant, which was inherited by Elias Ashmole and donated to the University on condition that they provided somewhere suitable to house the exhibits. The University accordingly constructed the Old Ashmolean on Broad Street. This building, sometimes ascribed to Sir Christopher Wren, is now The Museum of the History of Science.

The present Ashmolean Museum building was completed in 1845. Its collections of Greek, Egyptian and Oriental antiquities are particularly extensive and there are many fine paintings in the galleries. Particular curiosities which may be of interest are the Alfred Jewel (enamel under rock crystal in a gold setting and inscribed "Alfred had me made") and the lantern used by Guy Fawkes under the Palace of Westminster. 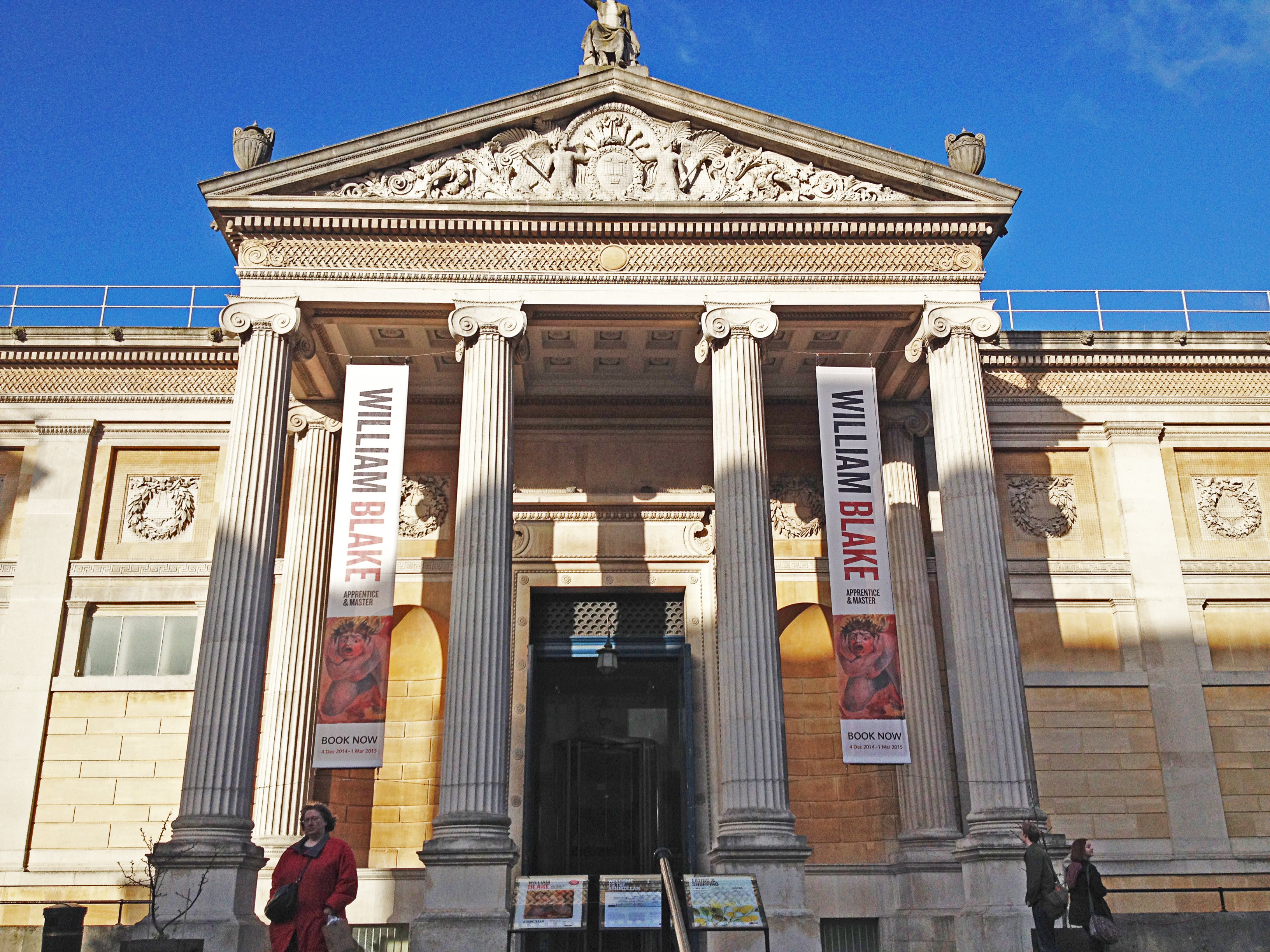 Ashmolean Café
Cafe in the basement of Oxford's most renowned museum.

Headley Lecture Theatre
Modern, functional lecture room with a flat floor enabling reconfigurations of the room. There's a smart lectern, a data projector and PA ...
Randolph Sculpture Gallery, Ashmolean Museum
Home to the Arundel Collection of Greek and Roman sculpture and inscriptions, this gallery is one of the first and still one of the most ...
Cast Gallery, Ashmolean Museum
The Cast Gallery houses a very large collection of very large casts of classical Greek and Roman sculpture.
Ashmolean Rooftop Restaurant
'Rustic, regional European dishes made from fresh local ingredients... 80 handpicked wines'.
Ashmolean Gift Shop
Gift shop for Oxford's most infamous museum
The Atrium, Ashmolean Museum
The showpiece of the Ashmolean's 2009 redevelopment, the Atrium is an exciting five-storey space available outside museum hours for hosting ...
Mallett Gallery, Ashmolean Museum
An elegant room in the Western Art area
The Boardroom, Ashmolean Museum
A very exclusive, intimate space with its own private rooftop terrace, the Boardroom is available for evening and weekend hire. Suitable ...
1 review

This exhibition is informed by the time Ali Kazim, one of the most exciting artists working in Pakistan today, spent in the Ashmolean. During a residency in 2019, Kazim spent days browsing through the Museum’s South Asian collection, examining several objects up close. More info
Wed 18th May

From Julius Caesar to Boadicea: A Century of Icenian Coins

This display introduces viewers to the fantastic visual world of the Iceni – an Iron Age community that inhabited present-day East Anglia. More info
Wed 18th May

This major exhibition, of works drawn from the Ashmolean's collections as well as international loans, will span Pissarro's entire career. More info Part of Pissarro - Father Of Impressionism

Vision Of A Moment

With experts in taxation from law, economics, and accounting presenting their work. Via Zoom More info
Thu 19th May

Drawing Clubs are open to young people aged 10 - 14 who have a passion for drawing. More info
Sat 21st May

The Pre-Raphaelites: Drawings and Watercolours

An opportunity to view our internationally-renowned collection of Pre-Raphaelite works on paper. More info Part of The Pre-Raphaelites: Drawings and Watercolours

Opening hours: Monday to Sunday, 10am to 5pm

Miranda Rose November 3, 2009
It's very exciting to be allowed back into the Ashmolean at last. For nearly a year the building has been heavily veiled in builder's fabrics and cluttered with cranes. Was it worth it? Have they managed the tricky balancing act of making the museum more accessible without losing its erudite charm?

I think they have. I was hugely relieved to see the graceful pillars in the main foyer (the ones through which one used to reach China) still intact. And I was stunned by the light and space, sheet glass and general shininess of Rick Mather's new bit. There are now lots of unexpected glassed-in viewpoints where you can catch sight of your friends in other galleries on the far side of stairwells - rather fun. They've taken advantage of the space to present lots of extra displays - in fact they've got twice as much of their vast collections on show than ever before.

There's been a chance to reorganise some of the familiar collections, too. Western Art is now divided more logically into a sequence of phases - Pre-Raphaelites, Dutch & Flemish, 20th century etc. My favourite landscape paintings by William Inchbold now hang together rather than being isolated in separate rooms, so I've finally had the pleasure of comparing them directly.

Some of the rearrangements provide particular satisfaction to the staff. A new room of musical instruments is hung with precious tapestries (remember the tapir? And a fruit-hung garden with musicians and a peacock). As Timothy Wilson, the curator of Western Art explains "Not only do they benefit from the same conditions of temperature and air and light, but traditionally a music room would have been lined with tapestries to improve the acoustics". A happy thought, to reunite the two.

I noticed greater detail in labelling, providing not only more detail on individual items but more extensive explanations of displays as a whole. Next to the gigantic stone coin (a foot in diameter) from the Micronesian island of Yap, is a photographic montage explaining how our money is made today at the Royal Mint.

This is typical of the museum's new display strategy: Crossing Cultures, Crossing Times, using comparisons of objects to "trace the journey of ideas and influences through the centuries and across continents." One of the treasured memories of my anthropology degree was wandering around the Ashmolean with the late Andrew Sherratt, an enthusiastic and inspiring guide whose particular passion was the development of such cultural journeys. It's good to see the general application of this approach.

One of the glossiest new features is the restaurant on the top floor. The café, traditionalists will be pleased to hear, is still in the crypt, but there's now a gleaming restaurant with a splendid outdoor seating area at the  very top of the museum. There's also an education centre and a brand new temporary exhibition space. And a lift (I hope they do something about the rather intrusive ping it makes on arrival though).

At the preview there were still some missing labels and even a few empty cases - staff have been working flat out to finish things off, and hopefully it'll all be complete in time for the public opening on the 7th November. But the design of the displays is very satisfying - everything's laid out with care and thought for the needs of each particular piece, and some lovely touches of humour.

For those who know it well, it's a little strange walking between the old and new buildings. But the new galleries have not been added insensitively and the set piece architecture is a lot of fun. It's fabulous to have access again to these exquisite treasures. The frog purse; the Alfred jewel; kettles, vases and screens covered in animals from dragons to mice; Roman, Greek and Egyptian scuplture; Chinese robes; the tiny jewel-like array of seals from Crete... The face-lifted Ashmolean is a world-class museum in the heart of our city, an amazing place to visit - and it's still absolutely free!

Images: The main stairwell
A glorious display of Greek vases
Looking through the glass walls, you can spot friends in other galleries
An extraordinary coin, over a foot in diameter, from the Island of Yap

Opening hours: Monday to Sunday, 10am to 5pm

In Praise of Hands

Never-before-published woodcuts and poems to celebrate the art of the human hand.

All images © Naoko Matsubara. Ashmolean Museum I thought I knew hands by studying them at medical school. Dissected, to start with: skin ...