Acanthus at the Randolph Hotel

Acclaimed chefs prepare the finest dishes from the à-la-carte menu, complemented with a handpicked selection of fine wine.

Acanthus at Macdonald Randolph Hotel, is the perfect blend of contemporary city centre restaurant combined with unique character and, of course, outstanding British cuisine. Acanthus retains many of the features that made it part of Oxford's illustrious history. Diners can enjoy a mouth-watering seasonal menu and above all, a place to relax and enjoy company with friends and family, making it a popular choice with both visitors and locals. 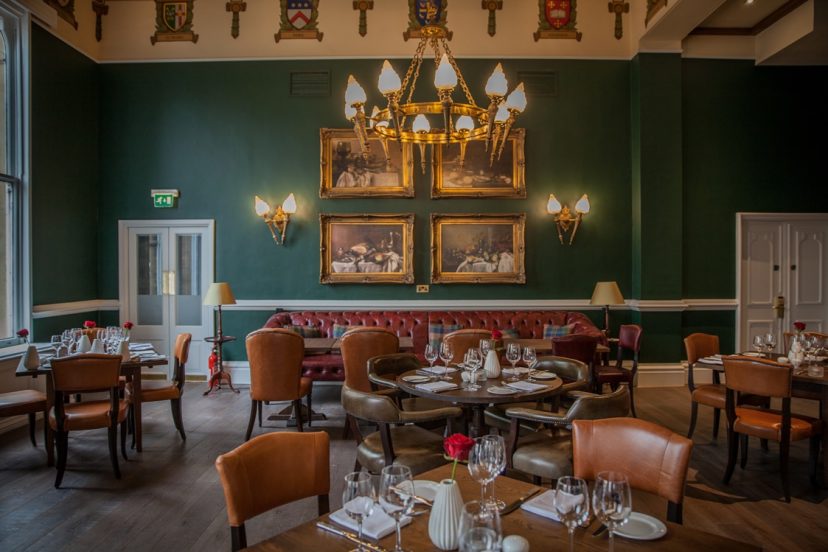 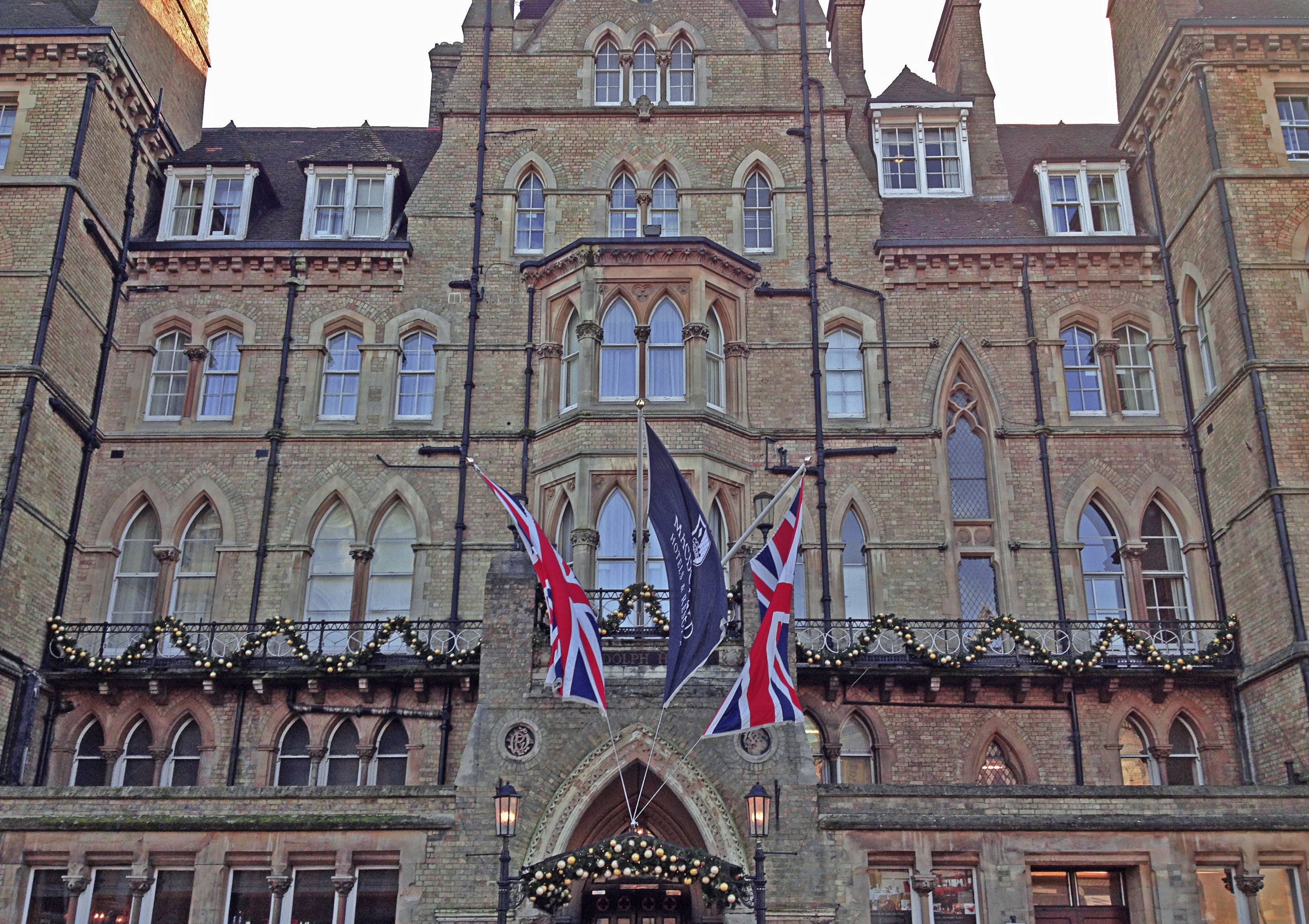 Part of The Randolph Hotel
Our Macdonald Randolph Hotel is the leading 5-star hotel in Oxford and offers luxurious accommodation, delicious food and a sensuous spa ...
Venue information
2 reviews

A full-English-based twitterstorm (a Category Two, at most) has gathered force in recent days, since Giles Coren experienced despair at the hands of an Oxford landmark. The paltry portion apparently made him feel first short-changed, and eventually "ashamed... of [his] country" - so Daily Info had to find out once and for all whether charges of inedibility were in any way founded.

Ok. So for a few pence more than Coren's omnidisappointment we got a fuller plate of cooked breakfast (look at the beans!), eggs Benedict, unlimited toast (plus a jam-packed jam holder of Bonne Maman preserves), and as much tea as we desired. Let's consider those things - Coren could've had them but seems to be a Heinz acolyte, and perhaps wasn't in a toast-friendly headspace. £22.61 for our supersufficient spread, compared to £21.50 for a journalist's grief. However... in terms of my cooked breakfast plate itself, it was no better than, say, a Tick Tock special from Cowley Road's reliable fry-up artists. A mass-produced feel shows that the Randolph may be catering more for a zillion hotel guests rather than inviting morning visitors. What did set it apart was a herbilicious Cumberland sausage, meaty and grease-free where the average greasy spoon may leave you feeling a bit more... regretful. The eggs were great according to my housemate, who is only too aware that hollandaise sauce is easier to get wrong than you think. And starting the day with salmon is always recommended. Service was reassuringly good: we were met by wonderfully polite reception, and an attentive waiter who resorted to maxi-helpful looming as the room was empty apart from us. We did enjoy having a quiet space - a humongous group from the Saïd Business School was being fed in the main Acanthus restaurant, so they asked if we'd be happy in the drawing room instead. Thus for most of the mealtime it was just us, a portrait of the Queen, as many copies of i as we could wish for, and vague thoughts of Anthony Hopkins in Shadowlands.

But, the takeaway points: value-wise, it seems from our respective experiences that the admittedly mysterious 'hamper' fee we paid will get you much more than Coren availed himself of; as such, a pair will get a lot more than a lone breakfaster; and the experience of being in the Randolph has more to do with its mid-20th century North Oxford luxury and a certain kind of tweedy treat, than getting the maximum banger for your buck.

I arrive at The Randolph early to indulge in as much high-class comfort as possible (free water). Sadly, the building is still working through the ravages of the fire, so I don't get the thrill of walking straight from the street through the fancy hotel doors.

I am greeted nicely though, offered my water, and shown the way to a very empty restaurant. But, perhaps, that is to be expected from booking Afternoon Tea at 5pm on a Monday (the blame here lies with my student friend).

The fear of selecting "incorrectly", of committing an Afternoon Tea faux pas, in a room full of empty seats can actually be quite crippling. The options are vast. There are the high-backed, austere chairs; large genteel sofas; or else nice, safe armchairs.

Soon enough my friend arrives, and we peruse the tea options. The menu 'Time for Tea' is set out like a story-book. I feel a bit like a young child of the forties, set to go off on an afternoon of ingot discovery and slightly dubious pirate battles. To counter this we get the fanciest (i.e. CHAMPAGNE) tea. The champagne has a strawberry in it. I ask if we get free refills (we do with tea).

Nor do we get more strawberries.

People come in, and then leave again. Our window backs onto nothing but plaster from the building-works outside.

It now feels as though we're trapped in a prosaic modernist play. We talk about evolution.

I had mentioned on ordering that I'm a vegetarian, and they bring me a separate plate of sandwiches, which is nice but also sad, because it means I don't get to use the tier system. And as my friend points out, that is the point of Afternoon Tea.

Interestingly enough, the cake stand evolved as a way to give cakes priority of place on a treat-laden table, and to demonstrate the host's most spectacular offerings. And at some controversial point (I am not sure when), metal superseded the traditional china. We're given a metal frame, with china plates, which I suppose is some sort of tacit refusal to comply to either faction.

I look around the room. It really is very big, and adorned with various oil paintings. My fastidious friend notes that they all have the look of the same artist; aside, that is, from a singular painting of the young Queen Elizabeth.

Maybe I'm not suited to Afternoon Teas, or maybe the concept of Afternoon Tea is one that sparkles only in theory, but I realise that small cakes really aren't very different to big cakes. Lewis Carroll has failed us.