A continuous record of daily temperature and rainfall has been kept at Oxford since 1815 (click here for the Radcliffe Meteorological Station). There are also incomplete readings going back to 1740.

You can check the current state of the weather at Benson (Oxford's nearest weather station) on the MET Office website. If you can cope with the flashing adverts, the Weather Online website is absolutely full of graphs, holds an archive (back to Sept '96) and gives 14 day forecasts. Paragliders are perpetually interested in the state of the skies, so it's no surprise they monitor weather closely. The excellent XC Weather shows beautiful graphics of wind speeds all over the UK, and other data.

If none of these sites answer your questions or get close enough to your house, then why not set up your own weather station? This could set you back anything from around £3 for a rainwater gauge and £15 for a max min thermometer up to several thousand dollars for a full, pro, wireless weather monitoring system. If you get interested enough to set up your own website recording your results please let us know and we'll link to it.

The coldest winter on record was 1962-3, with a mean temperature of -1.0°C. This was also the snowiest winter on record, with 67 days of snow cover. The coldest day on record was 27th January 1776 with a midday maximum of -8°C. On this day Dr Hornsby, who kept these early recordings, was moved to add a personal note to his meteorological journal: 'Wine keg froze in study!' More recently, on 13th January 1982, the mercury failed to rise above -7.1°C.

In spite of 1990, the best summer on record is 1976. Although its highest temperature of 34.3°C failed to beat the 1932 value, the heat was extremely prolonged with 14 consecutive days having maxima above 30°C.

A continuous record of daily temperature and rainfall has been kept at Oxford since 1815. There are also incomplete readings going back to 1740.

June is the sunniest month, with 6.6 hours of bright sunshine per day, compared with 1.7 hours/day in December. In June 1975 there were on average 10 hours of sun per day - a good time for tourists though less bearable for those taking Schools that year. December 1890 was very dull: the sun showed its face for a mere 5 hours the entire month. The sunniest summer was 1899, with 774 hours of bright sunshine during June, July and August, closely followed by 1976 with 770 hours.

As any disconsolate first-year will tell you, October is the wettest month in Oxford, with an average of 64.6mm rain. One is thankful that one was not here in October 1875 when 188.2mm of rain fell! The driest month is usually March (40.4mm) and Oxford has never had a month without rain, though February 1891 came close with only 0.3mm. There has also never been a calendar month with rain falling on every day. December 1934 came nearest with rain on 28 days. The highest monthly rainfall was in June 1852 when 193.0mm fell - over 3.5 times the average. The longest drought ever was 39 days from July 21st to August 28th 1976. Incidentally, there was another drought of 19 days earlier that summer. Oxford is one of the drier parts of the country. The total average rainfall here is 642mm per year, whereas Manchester gets 858mm and Belfast is inundated with 1279mm. Kew, London, is slightly drier (608), but the figures for July and August are very similar to those in Oxford, so bedraggled tourists will have to grin and bear it.

Snow is most frequent in late winter and early spring. Consequently there were only 6 'white Christmases' in the 20th century. In February 1888 snow accumulated to a level depth of 20-24 inches-the deepest on record. The most unseasonable snowstorm occured on 25th April 1908, when the undergraduates were returning to start summer term. 18 inches of snow were measured on that day. 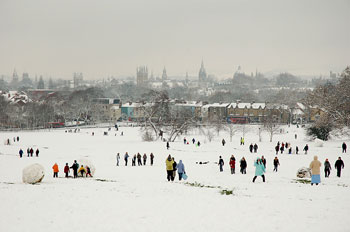 The earliest autumn air frost was September 28th 1885, and the latest 1st January 1954. Usually the first frost occurs between 24th October and November 8th in Oxford, but probably slightly earlier in the surrounding areas, where the nights are fractionally cooler. The latest ever spring air frost was May 27th 1914. The last air frost of spring in Oxford usually occurs between April 12th and May 2nd.